Shakespeare tends to have a love or hate reaction from general audiences. Some prefer the classic comedies while others love delving deep into the tragedies. However, whether you find his work clever or confusing, there’s a reason the plays are still being performed today. Shakespeare had great ideas and the premise of Love Labour’s Lost is an example of one of them.

The show tells a story of three men attempting to swear off women, alcohol and extravagant food for three years in order to 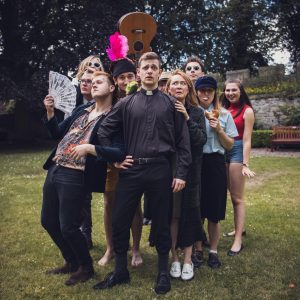 focus on studying. Long story short, they want the PG uni experience which would all be fine if the princess of France and her ladies didn’t happen to conveniently show up around the time this unofficial contract is made. As you can probably expect, misunderstandings, colourful characters and witty dialogue about love and all that fun stuff ensue to make for a funny watch that Castle Theatre Company have presented in a very entertaining way.

The play is set in the Fellows Garden of Castle college and director Barney Mercer utilises it to its full extent. Bushes and trees are used as props and to hide ‘off stage’ characters. The bench in the middle allowed for different levels to be created. My only issue was that with no other set design, it became hard to figure out where certain characters were meant to be at any given time. This made it a bit more difficult to follow the plot of the show. Originally, I thought they were just going for a more minimal approach, but other props and costumes were used towards the end. It might have been nice to have slightly different sets for each of the main locations to add some variety to the staging.

The cast overall were great. Tom Murray pulls off the stereotypical fool Costard with his amazing facial expressions and Aaron Rozanski’s use of posture and sarcasm make Boyet a standout character. It was impressive to see Fionna Monk, who I’d just watched in Ophelia is Also Dead, become the bumbling Holofernes, and Owen Kennedy’s Longaville provided some of the best laughs in the entire play.

There is original music in this show. And it sounded lovely. The actors flip flop between performing and playing, showing a wide range of talent throughout the cast. A strange assortment of instruments were used which was really interesting to see 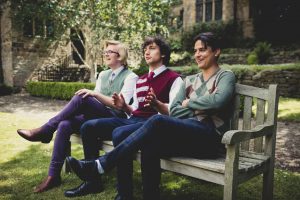 (eg. a portable keyboard that you blow into to make sounds?) and Georgie Proctor’s songs and transition music fit well into both the play and the sunny weather they were lucky enough to end up having. However, the choreography could have been polished a bit more. It was very simple and there wasn’t much of it, so it was a little distracting when actors used wrong arms and things like that.

In conclusion, this was a well-made production of Love Labour’s Lost. If you like Shakespeare, you’ll appreciate this play. If not, I doubt this is going to be the thing that will change your mind. Personally, I really enjoyed myself and would definitely recommend seeing it while it’s still in Durham or touring in the south. Perfect excuse for a picnic in the summer that’s finally arrived in Durham.

Love’s Labour’s Lost will be playing in Fellows Garden at 2:30pm on Saturday 22nd June and in Ushaw College at 1:30pm on Sunday 23rd June.