Mike Bartlett’s Love, Love, Love is a not-very-subtle indictment of the ‘baby boomer’ generation, offering a witty take on th 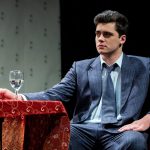 e disastrous self-absorption of 60s idealists through the lens of one family. Sandra and Kenneth meet as 19-year-old Oxford students in 1967 in the grotty flat of Kenneth’s dull older brother. We drop in on them again in 1990 in their middle-class home in Reading – complete with two teenage children, high-powered careers and a disintegrating marriage – and then again in comfortable retirement in 2011, at which point the consequences of their selfishness, on both personal and political levels, become abundantly clear. Pitch Productions, and director Lucy Knight, working with a fantastic script, have done a great job overall. Though the performance was definitely uneven at times, Love, Love, Love is nevertheless a thoroughly enjoyable evening’s entertainment.

Unfortunately, the first act was significantly weaker than the rest of the play. It felt as though less time had gone into blocking and rehearsing; the actors seemed shaky and unsure, leaving the whole act rather flat. This said, Bróccán Tyzack-Carlin carried off the part of the slightly arrogant but likeable university student well. His characterisation was consistently good throughout all three acts; assured, polished and showing considerable range. Florence Petrie was less convincing as the dreamy, pretentious and happily stoned Sandra. Thankfully, the play improved immensely in the second act, and Petrie settled comfortably into the role of the middle-aged working mother. Her sharp tongue and erratic behaviour were an utter joy, and she delivered some of the funniest lines with savage precision.

The greatest strength of the production was the family dynamic between Sandra, Kenneth and their children, Rosie (Emma Broadhurst) and Jamie (Rosie Minnitt). Broadhurst’s teenage whining was perfectly pitched and perfectly irritating, while Minnitt’s facial expressions were undoubtedly the comic highlight of the play. Broadhurst’s distress was totally believable, and contrasted wonderfully with Minnitt’s nonchalance. In the final act, however, it is Jamie who really captures the sympathy of the audience: dancing together to the Beatles, oblivious to the world around them, Sandra and Kenneth are ultimately just smug, careless and self-centred, while Rosie’s tendency to pontificate makes her impossible to like (though she makes some excellent points, and offers a rather grim glimpse of the future that feels all too real for soon-to-be graduates). The directionless, troubled Jamie, numbing herself to the domestic chaos around her, seems like the real casualty of this destructive relationship.

The production never became too serious, however. The awkward humour of suburban British life was spot-on. Several lines were actually lost due to the audience laughing so loudly – something the actors should take into account going forward! The sets, designed by Jasmine Lo, were perfect, and tech was minimal and professionally executed. With a little bit more attention to detail, and some ironing-out of first night issues, Love, Love, Love will be a very good production indeed.

The views expressed in the reviews and comments on this page are those of the reviewer, and are not representative of the views of DST or Durham University.