First performed in 2012, Caryl Churchill’s Love and Information probes us to reflect on the ways we create and communicate meaning in our relationships. The creation of meaning with the information we possess and lack is a task for everyone: the actors onstage, the production team, and the audience. Therefore, Churchill’s play allows for immense directorial freedom; the note states that scenes can be performed in any order within their respective sections, and a ‘Random’ section in the back can be performed at any point. Hild Bede Theatre’s production, directed by Isobel Jacob, successfully does a lot with very little, showing us a kaleidoscopic view of brief conversations which prompt us to create our own meaning.

The small, semi-circular stage is a highly appropriate setting for the brief conversations that form the basis of the play. A screen, lit in cool tones such as blue and purple, displays the scene name. This performance opened with a cacophony of mixed offstage voices: ‘I can’t feel anything!’, ‘They know you exist.’, ‘I woke up and had cheesy pasta’. A disembodied voice then read aloud the DNA bases (ATCG), which was interspersed with the beeping of a phone. The juxtaposition of these noises highlights how our daily conversations, which centre around the acquisition and withholding of information, are as natural as our DNA. 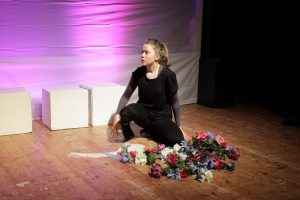 Variations from the original play were executed well, particularly in the first scene ‘Sleep’. The scene opens with a tableau of modernity, with minimalistic set design and props including a bed, shoes, and book, bathed in blue light. Though there are two actors on stage, one of them is obscured by the blanket. The resulting silence makes the actor’s frustration even more palpable, forcing us to fill in the gaps in conversation with speculation.

The cast excelled in the use of levels and the generally smooth transitions. In ‘Fan’, two siblings comically rail at each other, leaping up and down the blocks, which builds tension and vitality. The poignant scene ‘Shrink’ had an actor kneel and the shrink stand, evocative of a confession. ‘Secret’, which was performed directly after ‘Sleep’, featured the same couple and props, creating a sense of continuity. However, in ‘Lab’ the transition was fumbling, and the delivery confusing. It was unclear whether the actors were playing petulant children or adult scientists. Perhaps the delivery was intended to disorient the audience member, which could inject a new layer of complexity into the play: showing that both childlike unwillingness to accept new information and willingness to communicate are latent in daily conversations. Perhaps it was simply unclear.

Another strength of this production is its ability to seamlessly incorporate the uncomfortable and the humorous. ‘Remote’, which depicts an awkward exchange, shows one of the actors tensely writhing in her seat. ‘Census’ reverberates with the phrase ‘They know you exist’, placing a sinister emphasis on the elusive ‘they’. The melodrama of ‘Recluse’, featuring Jack de Deney’s sonorous voice, imbues the audience with both laughter and unease: laughter at the delivery, but uneasy because of the paranoia associated closely with information.

The cast’s engagement with the audience during the play was stellar. In certain scenes the actors do not face each other in dialogue, but instead face the audience. For instance, ‘Grass’ depicts a woman interrogating her husband about his activities, yet 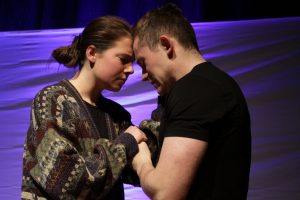 the audience appears to be interrogated instead. Audience engagement is taken to a new level in ‘Linguist’, wherein Lottie Dick falls onto the lap of an audience member, ‘I can’t help feeling it’s actually a table’, both flirting with the other character onstage and the audience member. Furthermore, the comic relief was delivered impeccably, particularly in ‘Mother’, which opens with Rose Galbraith belting ‘Bohemian Rhapsody’ and accidentally hurting her finger – a directorial decision not included in the original play that elicited bellowing laughter from the audience.

The economical and ingenious use of props was yet another highlight of the play. In ‘Earthquake’, the hollow noise made by tapping the plastic cup enhances the intended atmosphere of awkward dissonance. The stressed ramblings of the main character in ‘Manic’ on the symbolism of red flowers, while the multicoloured flowers strewn on the floor brings to mind Ophelia in Hamlet at the pinnacle of her madness. During the final scene, ‘Facts’, the flowers from ‘Manic’ remain in place, suggesting an overload of symbolism, meaning, and information. This is in keeping with the dialogue – rapid fire facts recited in the style of the game show.

If flawless comic timing and profound audience engagement appeal to you, HBT’s production of Love and Information is a wonderful, nuanced treatment of modern communication: the gaps in our shared information and our manipulation of what we know.

Love and Information will be playing in Caedmon Hall on Friday 23rd and Saturday 24th November at 7:30pm.