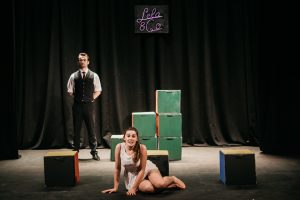 Lela & Co. is a true story, although it contains only general references to a war and countries that are never named, and the titular character is not based on one specific person but on a series of first-hand accounts of young women trafficked into sex work. Sightline Productions’ debut production is intense and distressing – especially considering the lack of an interval – but the honest and genuinely funny script, presented by a likeable and witty character, makes it extremely watchable and the audience’s attention was captured throughout the entire performance.

The play shows Lela, played by Rebecca Cadman, now a grown woman, trying to tell her story, but being constantly interrupted, contradicted, and berated by various male figures. Given the recent #MeToo campaign, when we are as a society recognising the importance of women (and men) being able to share their truth, it is a clearly very relevant. However, I originally felt that director Angharad Phillips’ assertion that it is “the perfect time to stage this production” was perhaps slightly over confident – as the many stars recently criticised for the seemingly empty gesture of wearing a Time’s Up badge will attest to, it is no longer enough to simply recognise sexual violence, but to address it in an active, self-evaluative way. Lela & Co., however, exceeded my expectations, with a production that does not simply show a black and white picture of evil things done by evil people, but how a system of oppression is built and perpetuated by everyone in the society that contains it.

Cadman gave an unbelievably compelling performance. She switched seamlessly between the cheerful and charming character to whom we are originally introduced, the terrified young victim, and the furious woman fighting to give her account. Her expressive face made it clear what she was thinking – her sudden fear when the first husband is introduced gave a heart stopping anticipation of the tragedy to come. Her confident physicality when giving caricatures of the other unseen characters gave depth to the story, and the entire performance was well paced. Occasionally some of the more meaningful lines were lost to the cheerful and childish younger character, but there were some truly chilling moments. 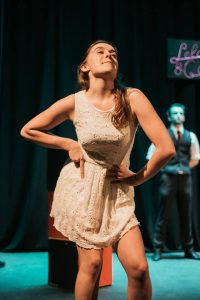 Zac Tiplady, who played the majority of the characters and had a small proportion of the lines, was consistently a strong and intimidating presence on the stage, as the five male characters that exemplify the myriad ways in which oppression is contributed to and perpetuated. Tiplady gave an exceptional performance, giving such detailed characterisations that it was possible to tell which character had which line simply from his tone of voice, and switching instantaneously between the physicality of each. Cadman reacted to each change of character expertly, and the different relationships were always clearly distinguished. However, whilst the pair had some moments of impressive choreography, there were some sections where the lack of movement began to feel slightly awkward. On the whole, though, the faster paced scenes were slick and well executed.

Our intimacy with Lela, magnified by the sparse set and Cadman’s charming and animated portrayal, drew in the audience as unwilling participants in her trauma, until we, as observers, were made horrifyingly complicit in the violence enacted on her. Cadman’s harsh, righteous anger during Lela’s outburst was for me the most powerful moment of the play, and I believe it will stay with the audience long after the performance is over, as a brutal reminder of our collective responsibility not to look the other way when faced with these stories.

The simple set, made up of nine brightly coloured blocks, was effectively used and gave a sense of continuity, reminding us we were watching a narrative told by Lela. I was very impressed that moving them around to form the different scenes didn’t detract from the action, and was often well used for emphasis. Technical director Emily Hickin should be congratulated on clean, quick lighting and sound that, although simple, added tension to the show. The neon sign gave a nasty, tacky edge to the serious events occurring below it, and, as a constant presence hanging over Lela, I found it a particularly creepy representation of her commodification.

The cast clearly had some first night nerves, but this was to be expected considering the immense task ahead of them. Everyone involved in this production has clearly put in an incredible amount of work to present such a challenging and difficult piece in a professional, engaging and hard-hitting way.

Lela & Co. is a true story in that it has happened, and continues to happen, to women around the world. It is difficult to walk out of the performance without a heavy conscience, but Sightline Productions have put on a deeply moving production that is very worth watching.