Ellie Farrell revels in the ‘blonde’-ness of DULOG’s final musical of the year. 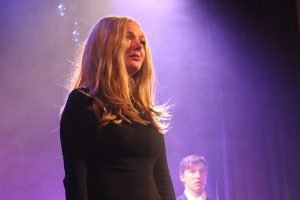 Adapted from the original book by Heather Hach, and after its rise to fame by 2001’s Legally Blonde starring Reese Witherspoon, comes Laurence O’Keefe and Nell Benjamin’s Legally Blonde: The Musical. The musical was reworked for the Durham stage by DULOG. Our protagonist is Elle Woods (Katie Sterland), a blonde bombshell from Malibu, keen on impressing her very recent ex-boyfriend Warner (Adam Hargreaves) after he brands her ‘not serious enough’ to be marriage material. This leads Elle to attempt to reclaim the love of her sweetheart – after finishing her fashion major, she pursues a place at Harvard Law School, commenting “what, like it’s hard?” Whilst there, she must battle both prejudice and preordained expectations in order to survive and become a respected lawyer. It’s ditzy, cheesy and, well, ‘blonde’, but that doesn’t mean it isn’t fun. DULOG’s Legally Blonde is a joyful ride, and whilst it may be superficial and inconsequential in its storytelling, that doesn’t mean it isn’t utterly charming.

DULOG’s Legally Blonde really finds its strength in its cast members. From Katie Sterland’s lively and endearing portrayal of Elle, to the ruthless and shark-like Professor Callahan (Kane Taylor) and Elle’s effortlessly comedic entourage ‘Greek chorus’, in the form of the ‘Delta Nu’ girls, every performance is vivacious, likeable (or dislikable when needed) and fantastically exaggerated. For this, the audience benefits from a sense of familiarity and likability. Even if you consider Elle’s narrative to be unrealistic and difficult to relate to, hers is an underdog story and the audience naturally desire her success. Other notable mentions include Danny Booth as Emmett the nerdy, studious law scholar who helps Ellie on her way to success, and Isla Brendon as Paulette, the timid hair salon owner, who encompasses much of the comedy in an already entertaining play, and longs for an Irish warrior to sweep her off her feet.

It is beyond argument that Legally Blonde is a notorious piece of media solidified in the history of modern popular culture, and taking something so distinctive and familiar is difficult to make original. Both the director Elliot Burford and his assistant director Euan Walker clearly strive to imprint their stamp on the play, be it through unique staging, the likes of which I have never seen in another DST performance, to onstage costume changes akin to quick-change acts. Such additions seemingly altered the play to make it distinctive from other Broadway and West End performances of the musical, and credit is also due to the staging and technical teams who facilitated such direction. 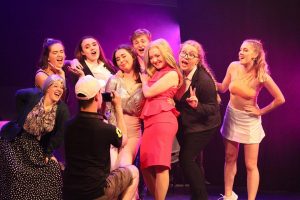 As with any musical, it is absolutely necessary to perfect the musical numbers and, boy, is Legally Blonde scattered with them. It is a huge song roster to try and tackle, with the majority of the narrative told in the form of song, as opposed to spoken dialogue (more like an opera, with the Greek chorus included to boot!). This makes for a swift moving and fun story when done right, and the cast nail every song. Each number is performed with vitality and an infectious energy which leaves your cheeks aching from smiling. This, coupled with the large cast, fills the stage effectively as the audience is subject to a bombardment of swarming voices. The show’s most easily identifiable number ‘There! Right There!’ or, as it is better known, ‘Gay or European’ is the distinctive standout moment of DULOG’s adaptation. They do it justice (if you’ll pardon the dreadful law pun) and the song is utterly slide-splitting, particularly Sam Baumal’s entrance as the jilted lover Carlos. A minor limitation of the vocals is that they can sometimes be smothered by the otherwise wonderful onstage orchestra and the intensively choreographed dance routines; this can pose obvious problems in a play where most of the narrative is sung.

Other minor criticisms involve the morals of the play; they are at war with themselves, and present conflicting views and contradictory storytelling. On the one hand, Elle tells Emmett that he requires a new, suave suit in order to impress the esteemed Professor Callahan and earn his respect, yet she also declares that she favours her revered pink dress in contrast to more ‘traditional’ courtroom attire insisting that this is the way she will remain true to herself. Change yourself for the better or remain true to who you are? Even the characters seem confused. The narrative is definitely perplexed about its own integrity, and tries to be resonant on too many levels; perhaps, it should be noted, that the musical benefits from preventing an over-analysis of its ideals.

Legally Blonde is sickly sweet and bubblegum pink; it’s frantic, jam-packed and assuredly cheesy. If you’re looking for a play about the prejudices and strife of law school, this definitely isn’t the play for you, but, if you long for fantasy, fun, adorable dogs (yes, really) and intoxicatingly catchy musical numbers, it is the verdict you were hoping for. “The court rests, your Honour.”