Review: Leaves On The Line 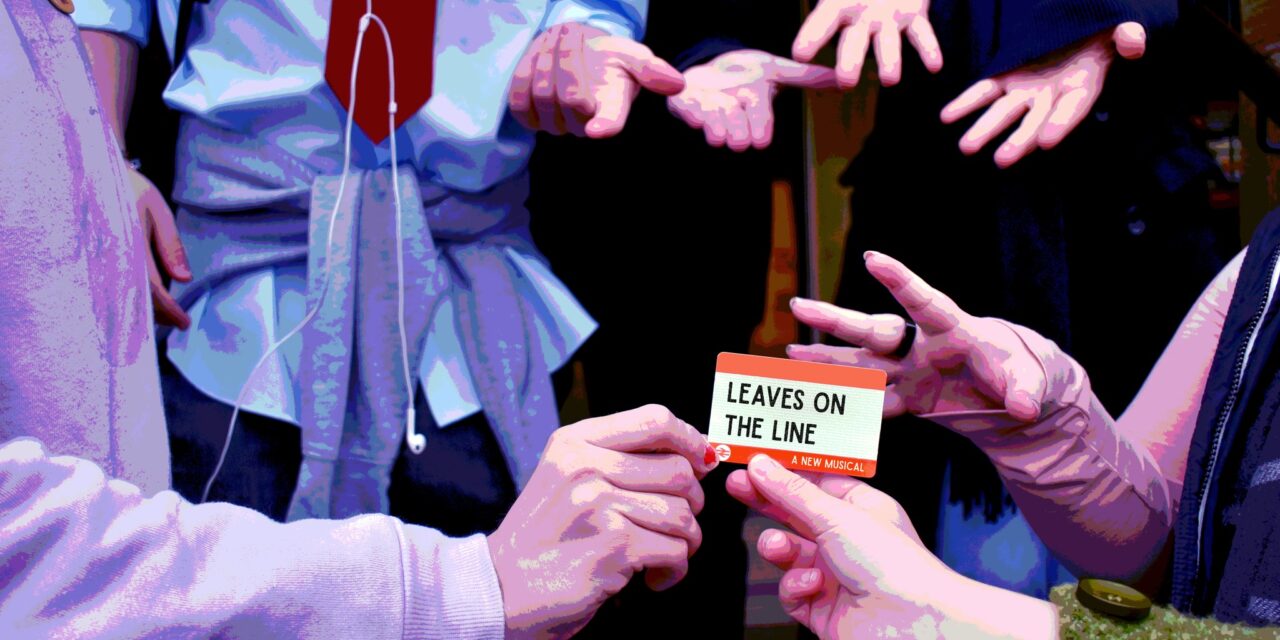 Constance Froment’s and Evie Press’ new musical ‘Leaves on the Line’ brings an exciting new concept to Fringe theatre. ‘Leaves on the Line’ charts the physical and emotional journeys of 6 strangers on a train from King’s Cross to Edinburgh, encapsulating human connection and the meaning of home. Having been involved in the original workshop cast of the musical, I was intrigued to see how much the show had evolved and I was not disappointed.

From the opening montage, each character was well defined and differentiated. This was a company of exquisite character actors with not a single weak link. There was a relatable character for everyone, and the impressive use of regional accent work transformed the show into a triumphant representation of the whole of the UK, cleverly avoiding the ‘Durham bubble’ stereotype. Alongside the wonderfully nuanced characterisation of every actor, the book written by Imogen Usherwood and the song lyrics by Press and Froment added depth and humanity to every role. Their writing style sparked effortless connections between each character, creating an electric atmosphere that propelled the show.

The staging of the show was one of its many strengths. Setting theatre in the round is notoriously challenging, but director Alexandra Hart did a stellar job of blocking the show to accommodate this. Her attention to detail is exquisite, from the use of lettered suitcases to create train station signs, to seamless group transitions, her crystal-clear directorial vision was a joy to watch executed so perfectly. The resulting immersive audience perspective only further enhanced the dynamic connection between cast and audience. Hart merged individual actors into a bulletproof ensemble, creating a sense of momentum that drove the piece. A show that could have easily been performed as just a song cycle, Hart had the difficult job of choreographing the show in a way that had a clear intention. Although Hart mastered this challenge, there were still a few moments where dialogue or solo songs were obstructed by the amount of movement on stage.

Harry Clipston’s and Amy Rettke-Grover’s masterful sound and lighting design transformed the stage. Due to the set and space limitations of a Fringe venue, Clipston had the especially hard job of transforming a black box space into a bustling train station, supported by Hart’s clever use of phone torches.

Ollie Fabb’s orchestrations also augmented every song, with the violin, cello, guitar, and piano combination perfectly complimenting the intimate, contemporary style of the show. Unfortunately, the band was missing a cello when I came to watch, but nonetheless, they did a fantastic job. Fabb struck the balance between composing interesting music, whilst not overshadowing the lyrical focus of each song. I would also like to commend the producers Jennifer Leigh and Joyanne Chan for their excellent publicity which will fare them well when marketing the show in Edinburgh.

Though it was clear the creative team put a huge amount of effort into the show, it was ultimately the cast that brought it to life. The company worked just as well as a vocal ensemble as they did a physical one, with every voice blending perfectly together to create some luscious moments of harmony. Harry Allderidge as the lovable, awkward conductor was casting perfection, he had the audience laughing in jest and pity throughout the show. Matthew Bourne’s performance as the Teenager was beautiful. As the most melancholy character in a largely comedic show, Bourne had the challenge of maintaining the audience’s attention and commanding the stage. His solo was a much-appreciated emotional release for the audience, bringing many to tears, a show-stopping moment. Issey Dodd’s stunning voice soared through the Commuter song, littering the role with the witty but honest sarcasm that made the audience warm to her, though I would have loved to see her fantastic character explored further as the show went along as it felt that she became marginally side-lined from the plot. Olivia Jones brought a sense of sympathy and humanity to a role that could seem blunt and unlikable. Her melancholic interpretation of the Actors song completely changed my perspective on the character, with jokes shifting to become more satirical and self-deprecating in a way that added a new depth to the character. Georgia Malkin as the Backpacker was the undulating comedic figure of the show, with incredible comedic expertise that made her stand out, commanding the stage in every scene like no other. The standout performance of the show was Evie Press as the woman on the phone. As one of the co-composers of the show, Press had a clear creative vision for the role that she executed with the characterisation, comedic timing and vocals of a true professional. Every acting choice was fully realised and enhanced every lyric, and her interaction with Allderidge in her song Eye Contact was a highlight of the show. There truly was a character for everyone to enjoy.

As one of the slickest, most polished performances I have seen in Durham, this show went from strength to strength. From the versatile cast to the ingenious use of tech and staging, the witty metatheatrical references and the beautifully nuanced writing, watching people just being people has never been so thought-provoking and entertaining. I cannot wait to see the show received by a Fringe audience, who I know will greet it with the same enthusiasm.