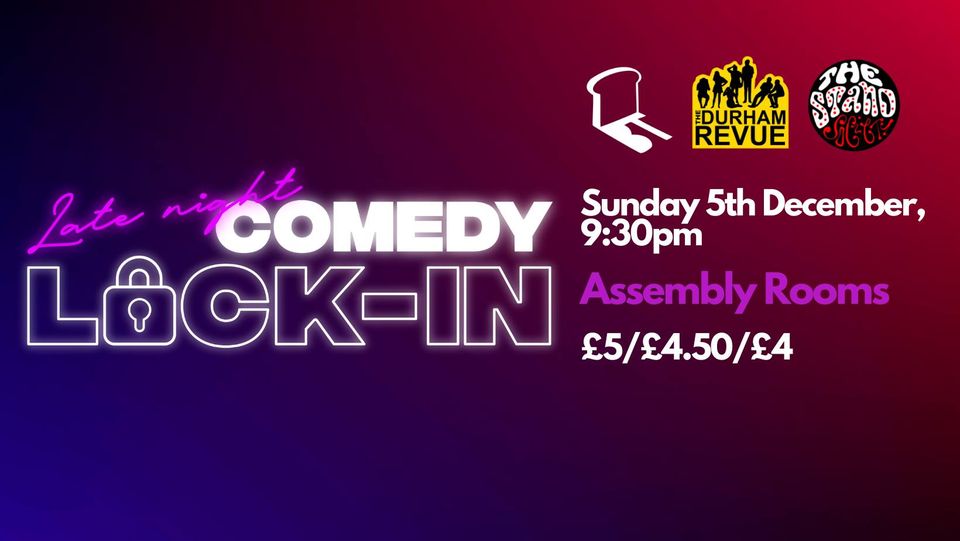 “brilliantly entertaining show with a series of captivating performances”

The Late Night Comedy Lock-in was a brilliantly entertaining show with a series of captivating performances from the Durham Revue, the Stand Society and Buttered Toast, not to mention the seemingly infinite hype of Broccan Tyzack-Carlin as host and the hilarious Lauren Pattison’s finish to the show.

On the night it was clear the Stand Society really stole the show. The way that each of the stand up comics commanded the space of the Assembly Rooms Theatre allowed for every joke to come off perfectly. James Murray was the perfect choice as the society’s opener. With his first joke he grabbed the attention of the audience and his energy maintained it as each punch line came hard and fast (like the subjects of his jokes!) The excellent character work of Amir Davies also really heightened the quality of Stand Soc’s performance. He had the ability to seemingly make any statement funny. Even when saying he hadn’t written any jokes for the evening, Amir somehow got a laugh. Finally, Sascha Lo was the perfect end for the stand up section of the show. Her ability to interact with the audience, alongside her hilarious character acting, was really able to get the audience laughing. What adds to the impressive display of the Stand Society is the fact that they have not performed stand up in a large theatre before. Perhaps the Holy Grale, where they normally perform, has given them the ability to command a room full of people ordering pints and chatting, making the Assembly Rooms easy in comparison.

Buttered Toast also stood out on the night. While they started a little slowly, the magnificent character work of their performers carried them through to the most hilarious sketch of the night. The school girl sketch put on by Buttered Toast was brilliant, the actors perfectly portraying the scene and really heightening the incredibly funny dialogue. In addition, the real inventiveness of the earlier sketches they performed was incredible, and the talk show sketch, while complex was excellently directed and the acting was superb. Overall, they were incredibly funny – a joy to watch.

The Durham Revue were also very funny, and clearly possessed great talent. The sketches they performed had incredibly funny elements, settings, or characters, but they couldn’t quite find a distinctive voice, apart, it must be said, from Tansy Adam’s gollum impression. However, many elements were great, the character of Bob Howat’s witch in the first sketch was a highlight, alongside the last raining men sketch. Daisy Hargreaves’ mother nature was especially acted brilliantly.

Overall, it was an incredible night of comedy entertainment and every single act had the audience laughing hysterically. The show was well worth the 20 minute walk in the Durham winter weather!