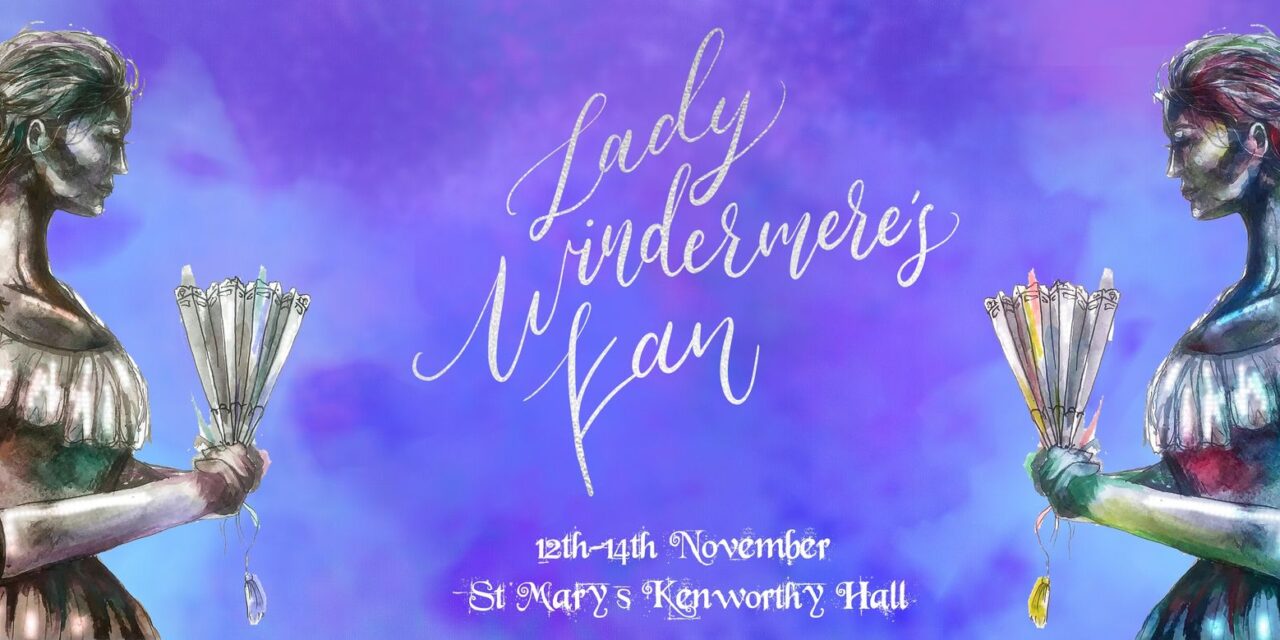 “brilliantly boasted their own unique stance”

Walking into Mary’s Kenworthy Hall, we were greeted with a stage surprisingly (to me at least) in the round. It‘s a small and intimate space but suited the world of the play well. The only issue was the cold, but that’s COVID’s fault for requiring an open door.

Finding my seat, next to one reserved for a mysterious “Mrs Erlynne” (there were other reserved seats dotted around) I found on it a charming printed invitation to “Lady Windermere’s Birthday Ball” and a little paper and wood fan.

The scene nicely set, the cast finally emerged. One first noticed the strength of costuming (impressive dresses and cravats what would later be supplemented by a couple of anachronisms; modern suits and Doc Martens which were, if anything, amusing and hardly detracted). After the dress came some incredibly dramatic and overdone “posh” accents, by first one cast member, than another, until it became clear that everyone on stage was seemingly competing for the sharpest, most affected “cut glass” of English. This threatened to become jarring but instead managed to add a comedy of its own and, as the ear eased into it, softened until it seemed almost comfortingly fitting, like the soundscape of Jeeves and Wooster or The Windsors.

The first scene or three introduced characters, symbols and themes that would become important later. Hanna Wright’s Lady Windermere appeared with just the right level of subtle innocence for her role, Matthew McConkey’s Lord Darlington had that ‘surprisingly soft for a bad boy’ feel, and Ben Cawood’s Lord Windermere was just loud and bumbling enough to let Darlington’s affections for his wife feel like a genuine threat. These scenes too began to field some of the famous wit of Wilde’s dialogue, but it wasn’t until the party scene that the play exploded into life. Here appeared an ensemble of incredibly strong smaller characters, in terms of costume, acting, accents, and satire. Special mention ought to be given for Silas Walsh’s Mr Dumby and Louis Renouf’s Cecil Graham. Here the play really came into its own and we were pulled into the high echelon of London society that Wilde so loves to play into. I would like to draw attention, however, to the slap delivered by Mr Hopper, which stood out as slightly atmosphere-breaking, but otherwise everything was very well performed.

When the second half began, it was with a markedly melodramatic and emotional dialogue. The second party scene revitalised the play, and the drunken buffoonery of the men (so well rendered by the actors they seemed almost like university students!) had the entire audience laughing aloud. Here, the script shone again with its strength of dialogue, showing off the ability to so well wield not only sharp wit and poise but much blunter, whisky-fuelled speech.

In all, the play was like any of Wilde’s: fantastically written, with both humour and moralising and no shortage of well-loved aphorisms. The cast and production team did a great job in keeping up with this (no easy task) and delivered a genuinely enjoyable piece of theatre which brilliantly boasted their own unique stamp.