Fourth Wall Theatre Company have carved themselves a reputation for dark comedies about the underdog male psyche. This is nestled deep within Killology, which is packed with humour, horror and emotion. Fourth Wall have advertised much of the violent and comical elements of this play so one initially assumes it will be a black comedy, or simply a psychological thriller. Instead, we are guided through an intricately woven tale of neglected adolescence, and the broken lives of corruption.

Jack Firoozan, Barney Mercer and John Broadhead star in this three-man show, which for the most part is split into monologues from three distinct characters: a teenager, a businessman, and a father. Through the thug-talk and the violence, there is a gentle exploration of family and the pressures of masculinity. City Theatre is an apt choice for this production, providing the intimacy to be effective yet with the end-on perspective so we never miss a moment.

Firoozan excels as Davey the teenager, telling a heart-wrenching yet comical account of growing up without any chance of 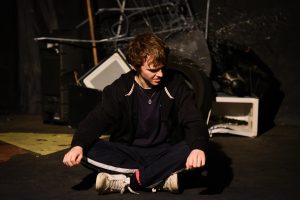 success. Even in the darkest moments, Firoozan can whack on a smile and utter cutting lines that force the audience to laugh with relief, whilst the action continues. His soft, likeable tone commands the audience to love his mimed puppy just as much as he does, and to despair at the irrational decisions his messed-up life leads him into. One forgets that Davey’s mother is not an acted role, so vivid is Firoozan’s body language and desperate tone. There were a few drawn-out pauses which seemed unnecessary, and the second half began with a rather comical backstage hunt for this actor, but this was perhaps mere method acting. Firoozan has the fidgeting and the rushed awkwardness of a teenager down to a tee.

In the dark world of ‘Killology’, evil walks and capitalism is merciless. Producer Victoria Ng has worked alongside director Elliot Ancona to create a minimalist dystopian set, with two desolate piles of all the trappings of the mundane concrete wasteland which Davey’s world is confined to. Technical director Tristan Ashley compliments this with his non-naturalistic use of cold colours and sounds which keep the action moving and fuse any splices in the action. One should expect to feel confused until around about the last moment, which means the audience can spend most of the play jumping to all the wrong conclusions.

Barney Mercer as Paul the games designer provides some comic relief, charming the audience from his first appearance onwards. At times this seems inappropriate: one wishes, for instance, that there was more seriousness about the prospect of 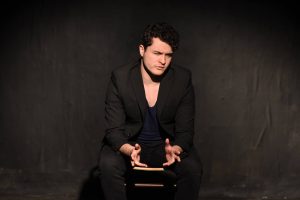 imminent torture. There is ambiguity over his emotions; his character comes across as just too nice to do the things he does, making his selfish actions seem even more unbelievable. There is a tired stereotype of greedy businessmen which the character of Paul struggles to escape from, although there is something chilling about the mask of warmth which Mercer’s character continues despite his flaws.

John Broadhead tackles the complicated character of Davey’s father, and amateur murderer, with endless innovation. Here lies the everyman of this play, and the summary of Killology. The humanity of this man is revealed tantalisingly slowly, beneath the thin façade of being simply a violent intruder. Broadhead masters the open-palmed, inarticulate antihero, just trying to do the right thing in a terrible place where goodness never happens. He battles through some of the slower pace of the play, and scares, amuses, charms and upsets us until the final moment.

This play is psychological. Fourth Wall’s advertising has possibly overly exaggerated the horror aspects, which may have resulted in the less than full house. However, this is more likely due to the time of year. Killologyroots into some deep questions of austerity-ravaged, class-divided Britain, and propels us through the other side into catharsis. It’s a well-thought through, sensitive and perfectly-timed production that stomps into some troubling topics unapologetically. Here’s an award-winning script, which is matched by a creative team that is some of the best Durham has to offer.

Killology will be playing at the City Theatre on Friday 7th and Saturday 8th December at 7:30pm.