Andrew Cowburn, Mungo Russell and Barney Mercer make up KEITH., Durham’s newest comedy sketch troupe. They bring their returning show KEVIN. from the Edinburgh Fringe Festival to the studio of the Gala Theatre for two nights in October, breaking up the monotony of Michaelmas term with some much-needed laughter. These boys are undeniably funny. Although the humour was rather niche at times, the cast’s enthusiasm and evident love of performance was uplifting. The huge variety and sheer number of sketches ensured everyone had at least a couple of personal favourites. 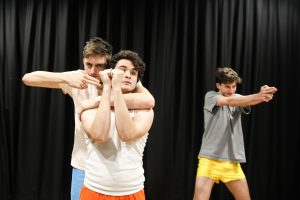 The comedy of the individual sketches was hugely varied with many a memorable piece. A personal favourite was a depiction of the reunion between two graduates of Year Four Recorder Class; a happily married husband and a ‘professional piper’, more commonly known as ‘The Pied Piper’. The sketch was so successful due to its creative reimagining of the relatable awkwardness of conversations with a former classmate combined with the absurdity of the Pied Piper’s descriptions of his employment. The dialogue was well-delivered with excellent comedic timing, a stand-out due to other sketches often seeming rushed with throw-away punchlines. An example of this was their much-repeated James Bond sketch; having spent so long setting it up, it was a shame that the punchline was quite so hasty and hard to make out.

KEITH. advertise that ‘nothing is off limits’ in their productions, and this was certainly true for KEVIN. The audience were often fairly shocked by the explicit nature of the comedy, which occasionally lost some of its humour due to such overt explanation. The Persil Commercial, for example, was hilarious, yet the racial insensitivity of the character depicted need not have been made so explicit; it would have been more effective had the sketch ended without this explanation. All that is needed would be consultation with an impartial editor – the length of the pieces could likely have been edited for better audience reception.

The show would likely have better suited a smaller venue, as the Studio at the Gala Theatre did not provide the intimate 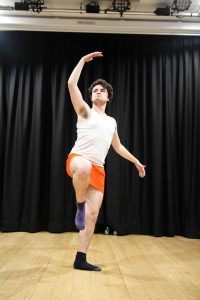 relationship between audience and performers that the production would have thrived on. Although the bar provided an informal atmosphere before the play began, the size of the Studio and lack of raked seating meant that the visuals of the actors’ facial expressions and physicality were lost to those sitting behind the first couple of rows due to reduced visibility. The company might have done well to adapt the staging to the space, perhaps reducing the number of sketches featuring chairs, or moving the action further upstage. However, the performers did well to engage the audience despite a difficult space; the energy of the introductory rap was contagious enough to rouse even the final row, regardless of whether the lyrics were a little drowned by the accompanying music. Nevertheless, the transition music used throughout the show was near-flawless, perfectly timed and with hilarious links to the scenes. Overall, the sound and lighting production was slick and professional.

The performers themselves did well in their numerous roles, with specific characterisation through both physicality and voice clearly a strength of all three. Mungo Russell’s use of voice, particularly in his role as Scooby Doo, was especially entertaining and refreshing given the continuous role-switching of the cast. I would have liked to see the boys’ own personalities shine through in the show as it is clear from hilarious moments of improvisation that the cast are comically adept. Although the raps in which they played themselves seemed a little too rehearsed and staged, the cast worked effectively as a cohesive unit, clearly enjoying themselves which helped to enthuse and uplift the audience.

Overall, I commend the troupe for their originality and recommend the play as piece of light-hearted entertainment, yet the humour should certainly not be taken too seriously for fear of offence. Limited to two nights, KEVIN. was an exciting arrival on Durham’s comedy scene, and I look forward to seeing how KEITH.’s writing and performance will develop in the future.

KEITH. presents KEVIN. will be playing in the Gala Studio at 7:30pm on the 27th October.