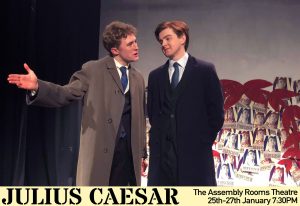 Phoenix Theatre Company’s production of Julius Caesar was a mixed experience. Moments of good acting characterised the more enjoyable moments of the play, but I would argue that the length of the production – nearly three hours – dragged on to the point of discomfort.

Theo Holt-Bailey’s and Owen Sparkes’s renditions of Cassius and Brutus respectively were distinctly impressive, with both actors deservedly dominating much of the show. Their soliloquies were some of the best moments in Caesar and the two of them effectively carried the production. Sadly, some of the other acting was not quite up to their standard, doing a disservice to a production with such great potential.

Nonetheless, Zac Tiplady captured the titular role of Caesar well, and Sophia Atkinson and Keir Mulcahey were some of the more notable multi-roling actors; it is a shame, therefore, that all three were not featured as prominently as I would have liked.

On the whole, Max Lindon’s direction was fairly inoffensive. His blocking was good, and the stage of the Assembly Rooms Theatre was utilised impressively. Some of the scenes could have been better polished in terms of slickness and line delivery, but, predominately, Lindon’s hard work was evident.

Technically, the show was professional and captivating. The lighting was particularly varied and suited each scene well. Sadly, the set was a little sparse: only really featuring a backdrop of the play’s promotional poster, trying capture the look of an election campaign. Indeed, I felt that more could have been done to effectively enhance the look of the stage. I also felt that the costumes, whilst nicely varied, were incongruous with attempts to modernise the play. The political elite seemed to exist in an era somewhere between 1940-80, whilst the citizens donned distinctly modern-day student clothing.

In fact, on this point of modernisation, the play ultimately failed to fulfil the claim that Caesar was ‘reimagined for the era of post-truth populism’ — whatever that means. It was really just a modernly dressed rendition of the original. More frustratingly though, the play’s long runtime resulted in a loss of momentum and, whilst instances of excellent acting invigorated parts, the audience were somewhat lost in the second half.

Shakespeare is always an ambitious undertaking, and bits of acting in Julius Caesar were genuinely impressive, something that Lindon should be proud of. The main issue, however, was that the production had no urgency and, when coupled with a number of rather uncomfortable performances, the audience left feeling rather relieved of its ending.

Julius Caesar will be playing on the 26th and 27th January at 7:30pm in the Assembly Rooms Theatre.