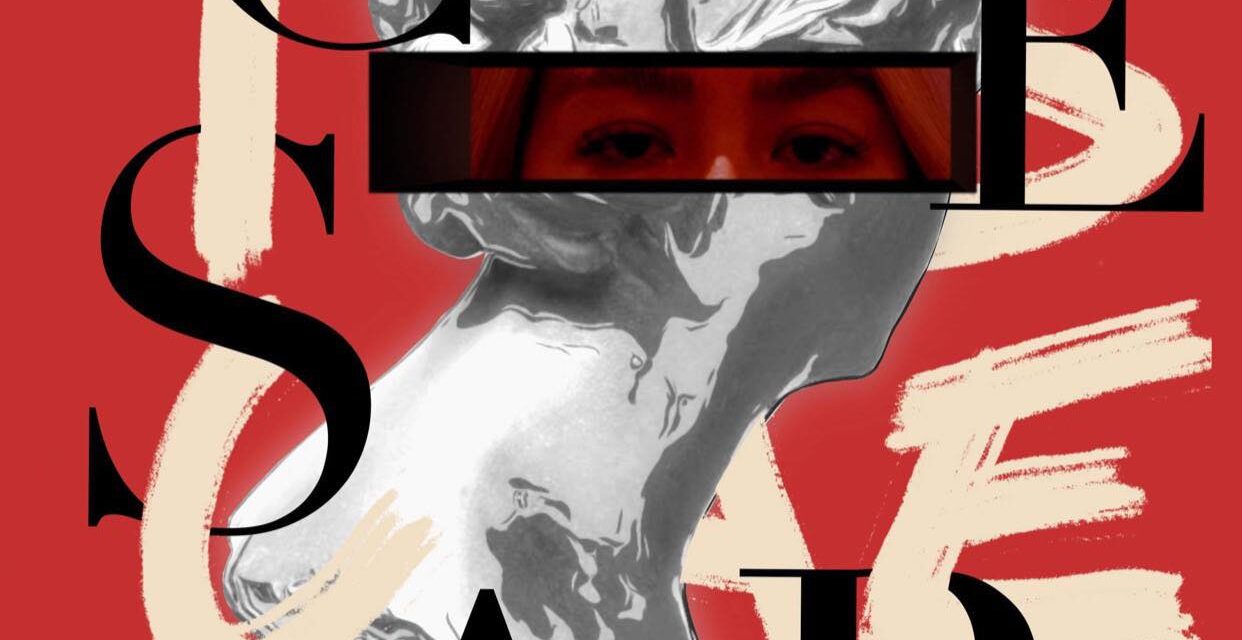 “reaches through our screens right into the heart”

“Women at some time are masters of their fates. The fault, dear Brutus, is not in our stars, but in ourselves, that we are underlings.”

In the face of covid challenges, Pitch Productions presents an ambitious all female performance of ‘Julius Caesar’ that reaches through our screens right into the heart of what loyalty, love and ambition looks like for a 21st Century woman.

Intention for making this production highly atmospheric is startlingly set in the opening shot; threatening blue lighting and a disconcerting, unbroken stare of the soothsayer is cleverly captured as the camera follows her from backstage, out onto the waiting faces of the rest of the cast onstage. The creative embrace of dynamic camera angles is a triumph of the filming and technical teams’ work, pursuing the bold vision of Co-Directors Millie Stott and Issy Palmer, and Co-Producers Yibu Jin and Toby Saunders.

The motivation and challenge around love was a feature most striking to me as I watched the passionate performance of Jessica Painter as Brutus, and her interactions with calculating Cassius, played by Adela Hernandez Derbyshire, and manipulative Mark Anthony, performed by Charlie Culley. The entire cast deliver lines with clarity and understanding, keeping the pace forceful and engrossing for audience members of any level of Shakespearean knowledge. Costumes of slick suits and power jackets are well chosen for these powerful political figures, yet I couldn’t help but find the song choices slightly incongruous, such as ‘It’s My Party And I’ll cry If I Want To’ blaring out of the CD player on stage as *spoiler!* Caesar is being brutally stabbed. While I can see the ironic intention in these choices, ‘Girls Just Want To Have Fun’, while Rome is being stormed by mutinous mobs being another example, the intensity of scenes such as Caesar’s death are performed in such all-consuming high tension that the music momentarily breaks the spell.

Louise Jamandra Coggrave makes for a fiercely authoritative Julius Caesar, exuding dominance over each scene that provides no doubt for Brutus’ justification: “As she was valiant, I honor her. But as she was ambitious, I slew her.” Throughout, bonds of love and trust are put to the test, and I applaud the cast’s intimacy with each other as they portray powers of persuasion in games of survival that have a palpable urgency and threat. Cassius’ lingering stares send cool chills of distrust, and Mark Anthony’s speech at Caesar’s funeral is delivered with astounding delicacy of manipulation and raw emotionality, that leaves minds reeling with questions of who is ambitious, who has honour and who to believe. The choice to film such speeches direct to the camera boldly implicates us into the heart of the action, tying us in knots of corruption and deceit.

A diverse cast of supporting actresses, Georgina Durie, Bhavan Amar, Eleanor Summer, Eugenie Nevin, Lucy Mae Bly, Miriam Thomson and Leah Pinter, must also be mentioned for their clear conversational depictions of entreating wives, co-conspirators, and political influencers, with a stand out ensemble moment at Caesar’s murder as the camera pans down to her stabbed body, drenched in red light, and eerily silent deep breaths. This production captures Shakespeare’s ability to talk to the modern audience, questioning the power of public opinion and how difficult it is to find true justice in dishonest politics.

Julius Caesar can be viewed online until Sunday through https://www.durhamstudenttheatre.org