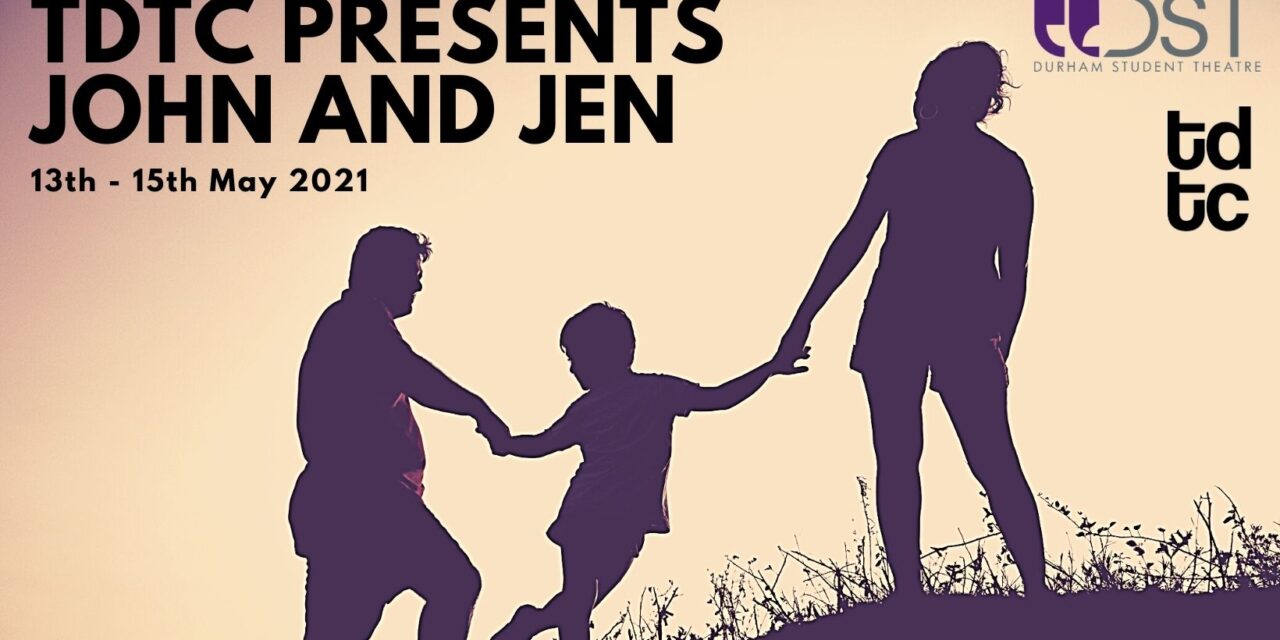 Florence Lunnon applauds TDTC’s production of John and Jen, a musical unravelling the emotional struggles of sibling and parental relationships.

As we head into June and (hopefully) more optimistic times, it is interesting to reflect on how we have had to adapt to our circumstances this year: establishing online connections, acclimatising to platforms such as Zoom and, overall, compensating for the joys we once shared in-person. Many activities have flourished in their new contexts, and the impossibilities of attempting a virtual musical were completely surpassed in TDTC’s recent production of John and Jen.

The first act briefly follows the childhood of John and Jen, played by Archie Collins and Anna Pycock, who instantly initiate a warm and nostalgic sibling relationship. Following solder John’s unfortunate death in Vietnam, the second act leaps forward in time. It turns the story’s focus to Jen’s relationship with her son (her brother’s namesake) and the tensions that arise from Jen’s maternal overprotectiveness, as she is plagued by the guilt of the last interaction she had with her brother.

This musical was aptly chosen as it appeared uninhibited by the restrictions we face from online productions. The virtual platform helped emphasise the sibling’s separation in age, location, and sex. In Act Two, it served as a physical communication barrier between mother and son, also separated by generation and life experience.

However, there were also moments when this separation was transcended, particularly within the first act. Such a moment, and probably one of the most emotional scenes of the play, was the song shared between the siblings as Jen prepared to go to college. Pycock and Collins perfectly captured this bittersweet farewell of ‘passing the torch’, emphasised by the pair’s silent handshake. The camera panned from Pycock to Collins, both with their arms outstretched, and the virtual barrier was shifted as we almost felt their physical connection. This directorial choice was subtle and delicate, but it made their close relationship feel tenfold closer. The moment amplified Jen’s heartache following John’s subsequent death and aptly justified Jen’s controlling relationship over her son in the later act. The gesture was so recognisable that it was almost a lost opportunity that it was not echoed in a similar way at the end of the show, in the parallel scene of John leaving to college. That said, the overall choreography of the song sequences was naturalistic and compelling.

My favourite scene occurred in the second act, while John and Jen (mother and son) prepared for Christmas. Collins’ portrayal of the 5-year-old version of both Johns was naive and lovable; this is a feat itself, as adults-playing-children can often be uncomfortably fake. In this particular scene, John presented an awful hand-made gift to his mother. Pycock’s expression said it all: that classic face of a mother ‘grateful’ for yet another cardboard box was hilarious.

This is just one highlight from an incredibly challenging piece to perform. Pycock and Collins mastered their characters at each stage of life and handled the variety of multi-rolling smaller parts successfully. The choice to cast just two characters allowed the sibling’s childhood isolation to shine and the omnipresence of the abusive father figure feel much more foreboding. The alterations in character were effectively marked by camera location changes and thoughtful costume prompts. Although there were a few absences of essential props, credit must go to the directors (Ava Siena Cohen and Sarah Callow) for their commitment to displaying the vivid and vibrant icons of the cultural revolution occurring in America from the 1960s-1980s.

Despite the technical demands of the music score, both Collins and Pycock flourished in their representations. The timing of the duets was remarkably accurate and acts as clear evidence of the diligence that the Music Directors (Chiara Fahy-Spada and Vivienne Shaw) and the actors put in to achieve this. The choice to include a piano score (provided by Josh Tarrier) specifically tailored to this production allowed some of the physical presence of musical theatre to penetrate past the screen. The pauses, silences, and transitions that usually became difficult when performing ‘karaoke’ were unnoticeable. This again reflects the (mostly) impeccable coordination of all those musically involved and the editing skills of James Tillotson and Archie Collins.

Overall, John and Jen is a nostalgic look back on childhood and a meaningful reflection on familial relationships that serves as a welcome break from exams. The hard work that went into this production is evident, and the show was thoroughly worth a watch.