From the inspired lyrics of Tim Rice and the iconic musical notes of Andrew Lloyd Webber rises Jesus Christ Superstar; a tale about the frailty of celebrity, the cost of betrayal and the unrelenting pressure of an inescapable destiny. Collingwood College’s Mark Hillery Art Centre serves as the stage for Castle Theatre Company’s debut musical performance and adapting Jesus Christ Superstaris certainly a tall order of biblical proportions.

Richie Johnsen cuts the figure of a melancholy, but somehow inherently millennial, Jesus Christ; he aptly wears the face of a man who is tortured by the tall order of destiny. Johnsen carries the role with grace and subtle acceptance; he is a man who must wrangle with –but ultimately accept– his fate of an untimely demise in order to save the souls of the very people who condemn him. There’s something distinctly Hamlet-esque about this portrayal of the Messiah, particularly when coupled with lines such as “I was inspired, now I’m sad and tired” and “my name will mean nothing ten minutes after I’m dead”. Johnsen 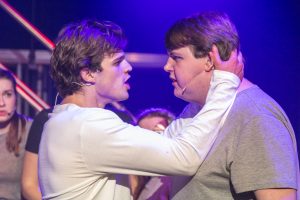 exudes a wide vocal range befitting of this rock opera, and it is clear that his upper limits are tested at times; but he more than rises to the challenge to encapsulate the tortured Lamb of God.

Judas serves as the other side to the metaphorical coin of Jesus, and he is brought to life by Thomas Bracewell. Judas, as reflected by his costume, resides in the moral grey area of ambiguity. History solidifies him as a traitor, and a coward, but ‘Superstar’ offers an altogether more sympathetic portrayal. Like Jesus, Judas wrangles with his own loyalties and destiny, and pays the ultimate price for his actions; something which Bracewell confers with ease and poignancy. Bracewell’s vocal prowess is the strongest of the main cast, and he is particularly powerful when he laments about his refusal to take the “blood money” of the Pharisee, all the while being bathed in red light, drowning in blood since the first moment that he contemplates betrayal. Arguably, the only shortcoming of this Judas is his death; somehow, the sequence seems rushed and is not given quite the sensitivity and gravitas it deserves.

The rest of the main cast also put in strong performances. Naomi Cook wears the look of devotion and loyalty on her face throughout the entirety of her turn as Mary Magdalene; the woman who does not know how best to love Jesus. Jacob Freda as Herod is bombastic and hilarious in equal measure, utterly stealing the singular scene that he is in. And, perhaps, my favourite performance of the evening is Ben Cartwright as Pontias Pilate. Both Cartwright’s vocal and acting range are able to shine 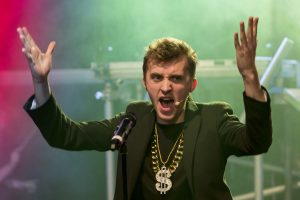 through. His physical struggle between fulfilling the role that God has set out for him and the heavy weight of his own conscience is reflected with brilliance and finesse and asserts Pilate’s role as the reluctant executioner bullied into his swayed verdict by a fierce mob mentality.

The sound, lighting, and technical aspects of the show are also strong. The band, featuring stellar moments from the electric guitar, is able to create the wonderful rock atmosphere which is so inherent in Jesus Christ Superstar. Most of the lighting choices are inspired; at the performance’s commencement, there is promise of an “excessive amount” of strobe lighting and, oh boy, do they deliver. A kaleidoscope of colours generates patterns akin to stained glass windows, and Jesus’ constant bathing in misty white or striking yellow is a wonderful consistency. Sometimes, however, the lighting feels a little too intense for the scene and detracts from moments which could have benefited from more simplistic colouration –but this is a minor criticism.

The play is directed and adapted well by Jennifer Baker. The advantage of the audience already knowing how the story ends allows for any semblance of subtlety to be lost. Hence, owing to this, ‘Jesus Christ Superstar’ is big, and bold and unwavering in its encapsulation of the media frenzy, or Jesus-Mania, that grips the central cast. This frenzied sense of chaos is additionally supplemented by the large ensemble of dancers, choreographed by Grace Buskell, who fill the stage and give a continuously 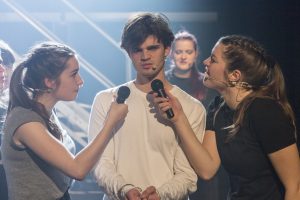 physical performance; as if they are so swept up in the madness that they cannot escape the current. For the most part, this is effective, but –in a few scenes– the backing dancers seem superfluous and detract from the central action.

CTC’s ‘Jesus Christ Superstar’ finds most of its stumbling blocks in issues of clarity. The costume is seemingly over-simplified; this can sometimes make the stage disinteresting to look at and offers little clarification and identity to some of the more minor members of the supporting cast, including Peter. However, the stylistic choice to have each cast member barefoot is a nice touch –it indicates that everyone, despite perceived societal stature and wealth, is ultimately equal and walks upon the same ground.

Overall, Castle Theatre Company’s first ever musical adaptation is certainly a momentous, and successful, moment. Their Jesus Christ Superstaris a loud, proud and incredibly fun alternative retelling of Jesus’ stardom and final days. As with any ‘first-time’, there are lessons to be learned but, for now, CTC’s ‘Jesus Christ Superstar’ remains a gospel of good news.