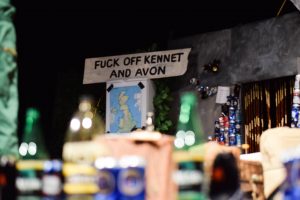 Jez Butterworth’s Jerusalem is a monumental play which confronts the audience with questions of identity at a time where the concept of ‘Englishness’ has never been more topical. Letterbox Productions’ rendition of the show, directed by Kimran Rana, overwhelmed the Assembly Rooms with energy and showcased some of the best actors currently in Durham Student Theatre. The play is filled with complex characters and tortured relationships which could have fallen flat were it not for the impressive level of physical and emotional acting displayed.

The first thing that struck me about this production is the set. The stage was covered in Rooster Byron’s world: a caravan lined with a tower of beer cans; a smashed television; flags; fridges; copious amounts of alcohol; drugs; a worn-out sofa – not to mention the various cast members which woke up behind furniture and bins as the play progressed. By the end of the first scene, the stage was already covered in beer, milk, vodka, and eggs – in no particular order. Co-Producers Ell Page and Rosa Hirtzel and Co-Assistant Producers Lydia Marshall and Alice Chambers should be proud of the part of England they created on stage through this chaotic but intricately constructed mayhem.

With a bold cast of 14, the pace of the production was well set to provide both outbursts of hilarity as the ensemble drunkenly manoeuvred their way around St George’s Day. The rave scenes were well directed, with strobe lighting and intense energy making them a disorientating experience for both the characters on stage and the audience alike. But some of the most striking scenes happened when characters were alone on stage and we got insights into the more complex character histories. George Tarling gave a remarkable performance as Johnny ‘Rooster’ Byron, the character’s protagonist who acts as drug dealer, story teller, poet, drunkard, father, and green man figure. Tarling entirely encompassed the role, ending the play alone of stage chanting curses and evoking the legends of England. His mastery of the character was stunning to watch. Kishore Thiagarajan-Walker as Ginger showcased impressive talent with physical comic acting, as well as providing insight into the tortured friendship between his character and Johnny. Other notable performances came from Harry Twining as Lee, Mary Lord as Phaedra, and Max Greenhalgh as Wesley, who each provided an infinite depth of character despite belonging to a large ensemble cast.

The technical aspects of the play were executed to a professional standard, with the exception of an issue of strobe lighting at the very beginning of the play. The contrast between the static everyday lighting and the strobe and UV lighting worked effectively to create tension between the apparently ordinary village life of the group, and their abandonment of cultural norms. The choice to have two intervals was unusual but ultimately helped the dramatic progression of the play.

The cast and production team of Jerusalem should be very proud of what they have created here. Despite covering themes that might at first appear remote to a Durham audience, the production was incredibly relatable and touching. In the middle of the play, Johnny asks, ‘what the fuck do you think an English forest’s for?’ and I think this is what Rana’s production is asking us too. Drug and alcohol abuse, violence, and underage drinking are initially what fill the Green World on this stage, but underneath are questions of identity, history, family, friendship, and ultimately what it means to be English. The play is aptly timed and superbly executed, please do not hesitate to go.

Jerusalem will be playing in The Assembly Rooms Theatre at 7:30pm on the 23rd and 24th February.