REVIEW: Into the Woods

Jennifer Baker journeys ‘Into the Woods’ with DULOG’s latest production.

DULOG have certainly set themselves a difficult task with Stephen Sondheim’s notoriously tricky musical, Into the Woods. It’s what can essentially be described as a mash-up of at least five different fairy tales, following an eclectic collection of characters on their respective journeys through the woods, set to Sondheim’s rich and complex score. It’s a challenge.

Director Owen Kennedy has chosen to stage his version of Into the Woods within a narrative frame, opening the story with echo-y audio of an argument between father and son. This comes around again to end the production and unite the disparate 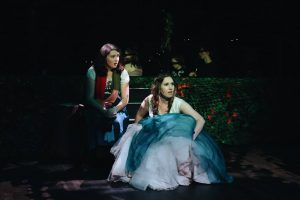 storylines. Whilst a smart directorial choice, it lacked clarity until the closing moments of the show and left many audience members confused. Perhaps it would have been more effective to see some nods to this throughout the show, although I understand the difficulty of shoehorning anything else into Sondheim’s already packed score.

Aesthetically, this production is confusing at times but shows great potential. A highlight is the costumes for Cinderella’s stepmother and stepsisters, played by Layla Chowdhury, Lucy Little and Anjoli Guha in almost steampunk corseted jackets with tight black trousers. The bold choices draw us into the overtly performative style of the musical but are sadly not consistent across the cast – at times I wondered whether each plotline was supposed to have its own aesthetic theme. It was not. The production team may also want to steer clear of their ‘non-white’ cow dressed in an appropriative Mexican-style costume. Yet generally the costumes do serve effectively to help the audience follow the (sometimes confusing) stories – the parallel doubling of Richie Johnsen and Mark Woods as Rapunzel and Cinderella’s respective princes was a nice touch.

This production was smattered with some beautiful ‘Moments in the Woods’ – a particular highlight for me was Emily Hardy’s Witch. She commanded both the stage and the audience seemingly with ease during her powerful and terrifying rendition of ‘The Last Midnight’, which was matched only by her tender control in ‘Children Will Listen’. It’s notable that these songs were unencumbered by the heavy mask and crutches with which she was laden for the first half of the show. Although these moments, amongst others, were spectacular, they were not always quite enough to carry lazy moments of blocking and some messy and under-rehearsed chorus numbers which never quite lived up to the show’s potential.

timing as Little Red Ridinghood. Ralph Skan, too, was a charming Jack who maintained a fantastic connection with his audience – his rendition of ‘Giants in the Sky’ was engaging and exciting. Another mention must go to Mark Woods, although occasionally he was prone to pushing choices a little too far into the realm of pantomime. Accompaniment from the band, led by musical director Finlay Gordon, ably brought the complex score to life and must be credited for the sensitivity shown across the performance.

This production of Into the Woods included not only an eclectic collection of sound effects but also a vast number of microphones which throughout the show rarely seemed to falter; due credit must be given to Freddy Sherwood and his technical team for the impeccable balance they maintained. The lighting design too was generally creative and evocative, although on occasion heavy handed.

Sadly, the downfall of this production is its inability to maintain the audience’s interest in the characters onstage. Perhaps this could have been remedied by the intelligent doubling of more characters – seeing Woods as both Cinderella’s Prince and the Wolf was effective and I wish there had been more pairings like this. However, the deaths of several of the central characters in Act Two were disappointingly underwhelming and honestly just needed more exploration – although with more time this might have been achieved.

Into the Woods is a show full of ‘moments’ that are beautiful but don’t quite allow it to live up to its full potential. It needs refinement but nonetheless is an enjoyable evening of one of Sondheim’s most iconic shows.