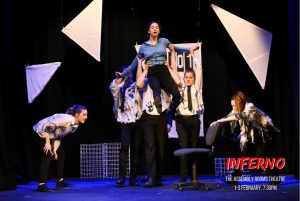 Wrong Tree Theatre’s fascinating twist on Dante’s epic takes us on a terrifying tour through the depths, and nine circles, of Hell: it’s a chilling journey, for somewhere so notably hot!

Isabel McGrady’s portrayal of successful lawyer Arabella serves as the horrified eyes and ears of the audience as Patrick Palmer’s enigmatic, and oddly sympathetic, Devil takes her by the hand and proudly shows us, and her, the world of Dante’s Inferno. It’s a dynamic performance from both leads with a strong supporting ensemble cast consisting of Olivia Swain, Kyle Kirkpatrick, Aimee Dickinson, Harry Twining and Fionna Monk, who serve as Lucifer’s minions, or extensions of himself. Each performance is a strikingly eerie one, be it Arabella’s despair, Lucifer’s madness, or the utter insanity – and dehumanisation – of his demons. Of particular note were the Devil’s ‘asides’ to the audience; these fleeting moments, often no more than one line, brought humour to an otherwise macabre story and offered glimpses into his personality. He became the literal ‘Devil on your shoulder’, whispering far more loudly than the angel might. Carrying Lucifer with such easy charisma reflects just how easy it is to succumb to temptation and go against what is considered right and just.

Attention to detail throughout the performance was notably impeccable. Emily Winters has crafted an intense score: a unique blend of classical and electric strings which embellished the story artfully. At times of intensity, the music was consuming and intimidating, like a force of Hell itself, but was also quiet and understated when the story required it. The clash of music styles was an assault on the ears and really captured the unrelenting terrors of Hell: after all, ‘the Devil has all the best tunes’. Furthermore, there can be no doubt that the costuming was inspired; each character was clad in business dress, but that of the demons was torn and mangled. Reflecting the repetitiveness of office jobs, the costumes demonstrated the unrelenting, repetitive torture that unrepentant souls are forced to endure. Lucifer’s black jacket with red lining is a subtle message, but an important one, about the slice of evil that potentially resides within all of us, but is simply kept hidden and out of sight.

Framed by the proscenium arch of Durham’s Assembly Rooms Theatre, Inferno was an unmistakably intimate exploration of the Prince of Darkness’ realm, with the use of lighting facilitating the creation of an intense atmosphere. With ‘Purgatory’ personified as an empty white, ‘Lust’ a seedy mix of purple and red, and ‘Greed’ painted with a bold green hue, it served to exemplify the jarring range of torture that waits for each different crime. Throughout each circle of Hell, what was particularly disturbing was the seeming familiarity: office chairs; a boardroom, and a nightclub –  all familiar, and all staple elements of this interpretation of Hell. No doubt, this is a call to Lucifer’s message, that the real Hell is the one we have made for ourselves on Earth. It is a strange and unsettling feeling to find that you might just be inclined to agree with his sentiment. 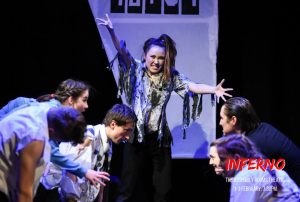 The play poses clear questions about morality and our modern interpretations of them. It begs the question: ‘are all crimes deserving of an equal punishment?’ This theme undoubtedly underlies the entire performance and is keen to explore and exploit the modern relevance of the Bible. Another message subtly weaved throughout the play concerns accountability for responsibilities and past actions; ‘I don’t make the rules’ says the Devil, he merely takes what he’s given. So, are we all simply players filling our roles on this grand stage? It’s certainly an interesting concept. For this, the play lends itself to audience self-reflection and leaves us asking questions long after leaving the theatre, no doubt what the writer Florence Petrie and director Henry Gould had intended.

Inferno is an immensely enjoyable and haunting piece of theatre. Unsettling, atmospheric and asking the questions that others would not dare, it’s simply one hell of a ride.

Inferno will be playing in the Assembly Rooms Theatre at 7:30pm on the 2nd and 3rd of February.