REVIEW: In the Wings

This was one of several lines from In the Wings that made me consider throwing down my notepad and pen altogether – this play was clearly more than capable of reviewing itself. But perhaps it would be foolish to expect less self-awareness from a play devised by a group of theatre enthusiasts, especially when it tells the story of a group of students putting on a play whose ambition, the actors at times fear, may never be realised.

Thankfully I can say that, much like the play within a play, Into the Wings gets its own happy ending. A piece commissioned by DST as part of their Wellbeing at Centre Stage initiative, the devised piece seeks to delve into mental health issues faced by many students, from relationship issues to social anxiety, and for the large part succeeds in tackling these subjects with grace 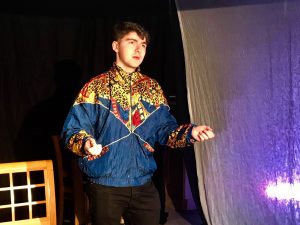 and legitimacy: even if the programme’s claim that “any audience member holding a DU campus card will spot themselves somewhere onstage” does oversell the play’s scope somewhat, it is undeniable that many audience members – myself included – would have identified with the struggles faced by the play’s six characters.

These roles are played to an impressively high standard, with particular mention going to Joshua Harrison, whose performance as nervy first-time actor Toby was wonderfully understated, creating a genuinely believable character that stole multiple scenes with his vulnerability and charm. Similarly excellent was Issy Flower, whose highly naturalistic style made her own moments of weakness all the more believable, and thus all the more moving. It also didn’t hurt that she had the funniest lines in the script.

Special mention must further go to Richard Sharpe’s performance as Alex, the socially awkward tech guy who was utterly convincing every moment he was onstage; every mannerism and idiosyncrasy helped to build up a character that felt totally real, and I found his concerns about whether his cast actually like him to be legitimately moving.

The cast was rounded off with Jia Ying Lim, who played an overworked director who enjoys pretending to be a tree, Imogen Carr, whose bubbly exterior hides her insecurities about the future, and Esalan Gates, whose character owes substantially to Alison from The Breakfast Club as the self-defined social outcast who hates everyone and everything. It’s with these characters that the writing becomes a touch more clichéd, as while they are well acted I do find that in particular Gates’ character comes off as a bit too one-note: dressed in four shades of black, she spends the majority of the play insulting and belittling the other characters, yet this makes her redemptive monologue feel rather unearned. Regardless, it should not be ignored that all actors commit to these roles 100%, so perhaps such tropes are simply the by-product of the devising process, 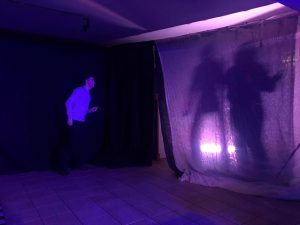 which is nonetheless able to create a highly engaging story.

Furthermore, the fact that the ensemble and directors (Amy Allison, Aimee Dickinson and Imogen Usherwood) have been able to create an hour-long piece of drama at all, let alone one this compelling and thoughtful, is a feat unto itself. For any gripes about overused tropes the plot remains a highly relevant examination of student theatre; the camaraderie it can produce and the fears it can exacerbate are both explored. The intimate performance space allowed the actors’ naturalism to truly shine, making their performances all the more relatable – they were able to whisper and be heard, and slight movements or mutterings were all that was necessary to communicate a character’s mental state. However, there were a couple of issues with lights being in the wrong place for the all-important monologues (each character got a soliloquy that allowed us to look ‘behind-the-scenes’ at their psyche), resulting occasionally in actors’ faces being obscured. Despite this, in general issues with tech were mercifully sparse, and so credit must be given to Adam Carruthers and his team for ensuring the smooth running of transitions.

And while this may not seem like much, I would like to thank the play’s directors for ensuring that their exploration of mental health was as sensitive and true-to-life as possible. It’s not every day that you see a play with the emotional maturity to not only tackle mental health, but to feature a lead gay role who is not defined by their sexuality. So while I would love to make some snide remark about ‘In the Wings’ being worth its price of admission (it was free), the play ultimately deserves better. It is a mature, concise, brilliantly-acted piece on student theatre and student life, and while it certainly isn’t perfect, it is nonetheless deserving of high praise.