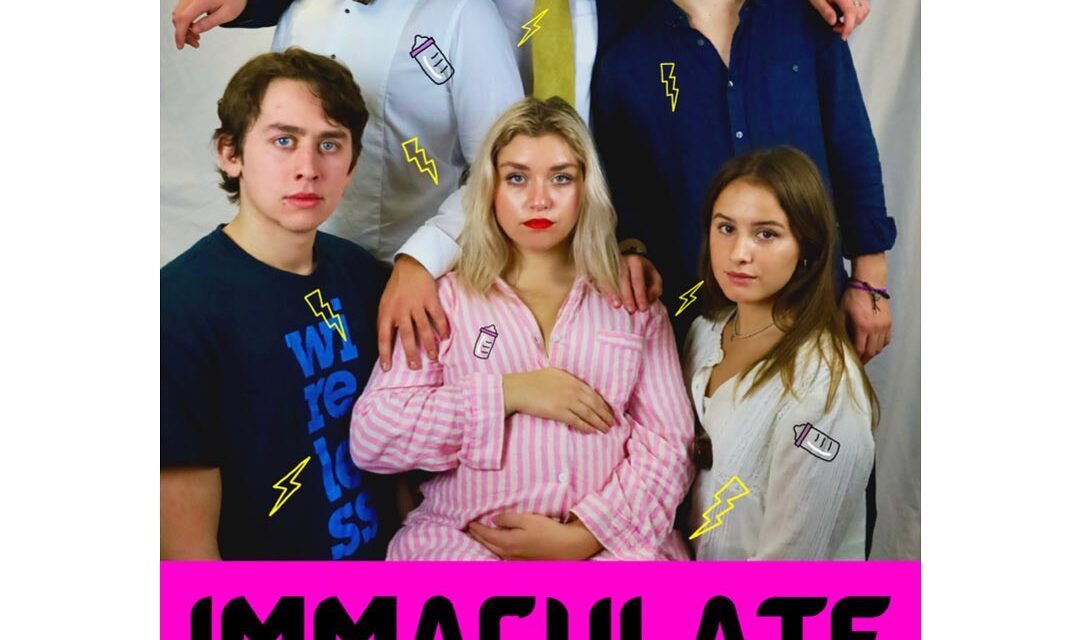 “I was expecting an impressive performance, but that does not even begin to describe the talent sizzling in every nook and cranny of this production”

‘I felt something inside of me, and I know you did too!’ Although not quite the same thing that Mia (Eleanor Sumner) felt inside of her, from start to finish the audience was injected with a new lease of life after watching the stellar performances and uplifting hilarity of the Suffragette company’s production of Oliver Lansley’s play ‘Immaculate’. It left us gasping for breath as the cast delivered blow after blow of belly-aching and quick-witted humour.

In line with Lansley’s play, we follow a comic variation on the virgin birth in which a 26-year old Mia (Eleanor Sumner) finds her life spiralling into confusion with the tightly wound archangel Gabriel and seductive Lucifer appearing on her doorstep to claim fatherhood over this unborn, miraculous child.

Staged in a potentially suffocating room in Alington house, set designer Alice Kane used the location’s cosiness to her advantage. Striking the perfect balance between cluttered and spacious, the set worked to enhance the light heartedness of the play and allow each character their place to shine. Moreover the minimal variation of lighting – a steady ambery hue – was the perfect choice, as it did not detract from the actor’s brilliant and colourful acting. The one time the lighting did change was to a distilled blue to mark a change in location, creating a dichotomy of spatial zones in one instant without compromising the structure of the set at all. One thing about the set that really struck me was the tactical placement of Mia’s thong at Gabriel’s (Alexander Bittar) feet. What would have otherwise been an almighty speech was undermined by the almighty presence of the thong instead, making it impossible for the audience not to giggle.

The outstanding direction of the play under director Emily Browning and Assistant directors Katie Procter and Charlotte Aspden’s instruction prevented the play from becoming stationary and slow-paced. The implementation of a witty and musical chorus to move the plot along and reinvigorate the play when necessary brought in a refreshing and dynamic edge to the play.

It would be remiss for me not to acknowledge the spell-binding performances of the actors. A steady guarantee to keep the audience in fits of laughter was Alex Davies, whose portrayal of Mia’s temperamental ex-boyfriend Michael had the audience choking back tears of mirth. Davies infuses the play with an explosive and addictive fireball of energy, his erratic gesticulations and manipulation of volume levels making it near impossible for the audience to take our eyes off him whenever he is onstage. The dynamic between him and Eleanor Sumner was electric, with their nuanced performances hinting at undertones of residual attachment and attraction as well as their hilarious contempt for the other.

Notably, this play’s distinctive standout for me has to be the perfectly timed facial expressions the actors effortlessly pulled off. James Barber (Lucifer) had a particular knack for it: his cheeky grins and overtly sexual facial expressions added a homoerotic and playful tone to his character. In addition, his leaning towards understatement for dramatic effect and occasional exaggerated outbursts made him a compelling character to watch and a highly intelligent actor to admire. Lucifer’s antithesis, Alexander Bittar as Gabriel, also possessed a natural flair for comedic timing yet I found Alexander’s faultlessly funny and casually offended delivery of his lines to be his most outstanding feature, as it stood to depict his wide range of emotional expression.

A final topic to note on has to be the character dynamics that bloomed left, right and centre. Every character that was added to the mix revealed new dimensions in other characters: Juliette Willis’s truly hilarious performance of the childish and irritating best friend Rebecca brought in a new zestiness to the play, allowing for other characters to bounce off her magnetic performance. Alfie Cook as the jarring character Gary added extra spice to spruce the play up and contribute to an increasingly chaotic and hilarious climax. All throughout the play Eleanor Sumner varied in emotions, outfits and body language yet never once did she vary in her vivacious stage presence nor her enthralling and captivating acting prowess.

This daring and hilarious production had a lot to pull off on opening night, and it triumphed wholeheartedly: not one member of the audience failed to be reeled into the marvellous microcosm of high-spirited drama and breathtaking acting. I was expecting an impressive performance, but that does not even begin to describe the talent sizzling in every nook and cranny of this production. If you’re looking for a pithy, fast-paced and laugh until your sides hurt kind of night, watch this, and in the words of Gary Goodman ‘Spread the word! Spread the word!’

Immaculate is performing in Alington House until Friday 2nd December