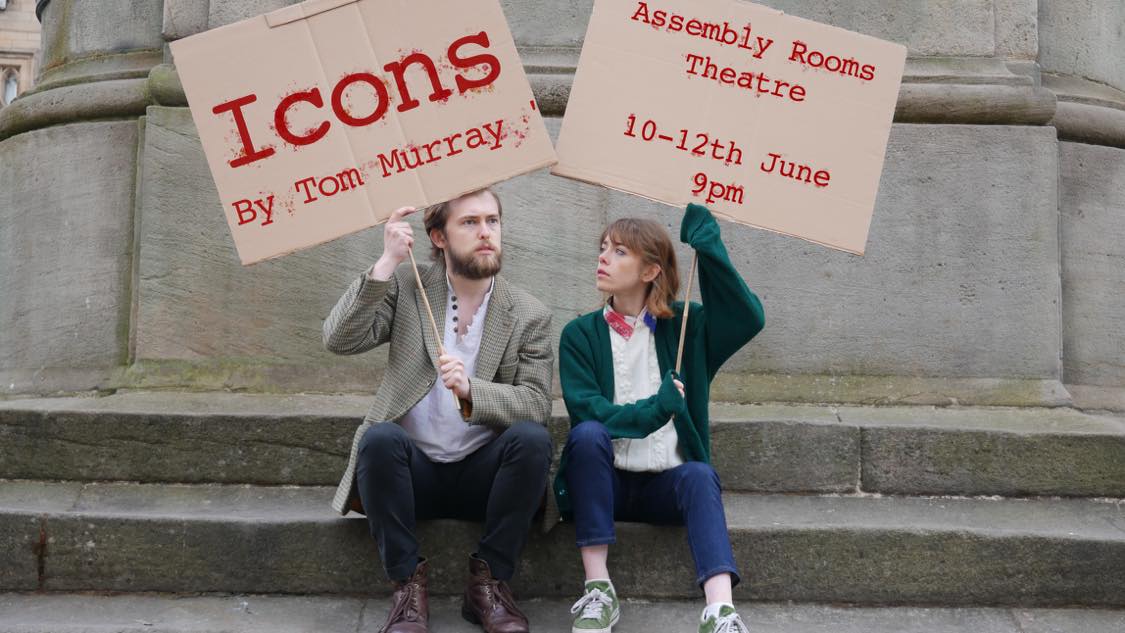 “Icons is a play about a spot in Parliament Square. Upon this spot converge a number of figures: a statue artist, a beggar, a protestor with dementia who has forgotten what he is protesting about – and his daughter. Around them, the familiar statues stand on ceremony: Churchill, Gandhi, Mandela, Fawcett. Last night there was a murder. The scene is taped off. In the middle of the stage lies the outline of a body in chalk. In a tale of crime, complicity, and idolatry, we join them as they struggle to keep their place.”

Icons, written and directed by Tom Murray, has left me speechless. Throughout the curtain call, I was silent; on my walk home, I was silent; and sitting in front of my laptop writing this review, I still am silent. My silence stems from many sources: an assortment of various competing emotions which compound into the colourful impression this play has left on me. Mostly, I am speechless at the sheer amount of talent I witnessed. Student theatre is an elusive thing, dodging any kind of quality assurance. But I do not exaggerate when I say that Icons blew the lid off of my expectations. The writing, the acting, the direction – it was on par with professional theatre of the highest order. I realize that this sounds hyperbolic, and I stress that this has to be taken in the context of the circumstances in which this play was made (limited resources, small stage, etc.). Looking at Icons, however, I am in awe at what this team achieved with what they were given.

Each actor brings a uniquely charismatic and committed performance to the table. Alexander Cohen delivers each of his lines so charmingly that you cannot help but hang on his every word, supported by his mannequin-esque mannerisms. Ben Willows is so immersed in his performance of the grumpy old man that one can sometimes believe that there truly is an octogenarian standing on stage. Jacob Freda, playing a homeless man, has a less present role but still shines in every moment he is given. The true standout for me was Isabella Thompson. She grounds the entire play in a performance that might be less showy than the others, but in turn, demands even more subtlety. She manages to stand next to all of these high-strung characters and still seem real. Each expression, each delivery sparked a deep sense of emotion, empathy and sadness, without which the play would not work. Finally, if course, I need to mention the impressions of the famous personalities looming in the background of every scene, which were spot on.

A lot of the magic is in the writing, which mostly remains engaging through the dialogue just being clever. In almost every line, there is wordplay, a reference or joke that keeps the gears turning and thoroughly entertains. If there isn’t one, there is usually a point to be made. This play has a lot to say. The speeches, however, are not only there to give a lecture about politics, but each of them informs character too. This is where I began to love this play. The characters were not only a mouthpiece for ideology but always stayed human in doing so, becoming subversive symbols – icons – for bigger issues at hand. The surprising ways in which politics and philosophy are utilized here are truly fascinating.

There are some issues with the play, however, which need mentioning. The writing can meander a bit at times. There are speeches that go on for longer than they need to, only to make a point that has already been made beforehand. The sound mixing is sometimes problematic, jamming a lot of recorded dialogue in tight spaces and overdoing sound effects and music. Lastly, even though the writing and directing stay mostly strong throughout, both slightly fell apart in the end. The ending seems rushed, coming too early and leading to a conclusion that does not fully conclude the themes or questions thrown up by the play. Instead, it goes for a bombastic explosion of colour and sound. There is something to be said for the amount of spectacle on display here: when the music comes together with the flickering lights and Ben Willows goes full Al Pacino, it is definitely entertaining, almost chilling. However, it lacks the finesse and care of everything that came before, almost being antithetic to the comfortable pace of the piece. The play is strongest in its quieter moments, when the noise dies down. How sad, then, that the end was nothing but noise. 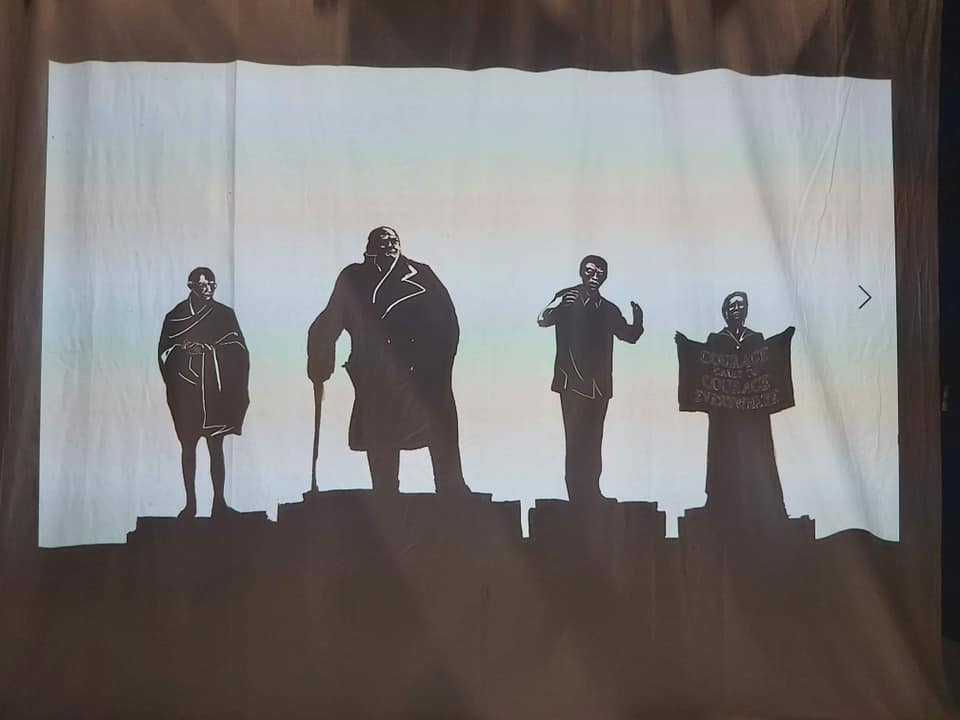 Still, Icons stands strong despite these issues. There is so much more I could say. For example, how the vibrant stage design, lighting and music evoke an intriguing electro-rebel-punk aesthetic that is highly evocative of ‘V for Vendetta’. How creatively space and background are used in the play, always making you reconsider how to approach it. Especially when all the different levels of narrative and space converge, it is almost magical. I could continue, but for the sake of time, I shall cease. For the rest, you will have to watch Icons yourself, which I highly recommend. It is a benchmark for theatre in Durham.

Icons is performed at the Assembly Rooms Theatre from 10th to 12th June. Tickets are available to purchase here.