Personally, I think that’s the best phrase to describe I Love You, You’re Perfect, Now Change. A musical anthology of sorts, this show changes characters every scene to more or less make fun of the fear of dying alone in creative and hilarious ways. Whether it’s the cliché man having to sit through a chick flick date or the much more original couple being literally scared into marriage (yes, you heard me correctly), this show puts into perspective just how ridiculous and odd dating, marriage and sex can be sometimes.

Describing the show doesn’t exactly do it justice though. It’s the emotions that carry it through and luckily for us the actors involved do a stellar job in portraying every feeling they need to put out there. Kyle Kelleher’s facial expressions were beyond perfect and I can guarantee that if you see him in the background of any scene, he will be completely in character no matter how small the part. Olivia Jones’ acting range was also commendable and Rory McNeilage switched between a murderer and a 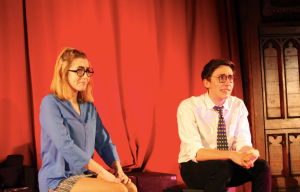 simple husband just wanting some downtime with his wife so quickly and effortlessly it almost feels like whiplash. Tara Munnelly performs a standout scene of a woman not quite over her ex joining a dating site and Kate Russel’s vocals were absolutely beautiful to listen to.

What I’m trying to say with these examples is that these actors weren’t afraid to get sucked right into the absurdity of this whole production, and all their performances added something to the story. The American accents were solid and singing delightful to listen to.

Director Rebecca Kingston deserves a lot of credit for the comedic timing of the scenes. Her direction led to some of the biggest laughs, of which there were plenty. In fairness, this show really is nothing but laugh after laugh with the occasional emotional scene when it needs it, but as someone in a particularly bad mood at the time of watching the show, it was kind of the perfect experience not only to cheer me up but to also to make me think about what a healthy relationship really is.

Honestly, I didn’t know whether to laugh or cry when this production ended. And that’s a weirdly powerful emotion that’s interesting to walk out with. I just wish the transportation to the theatre was more organised. For those of you that are 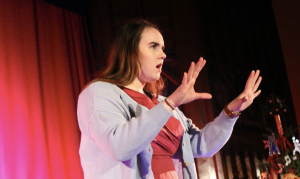 unaware, this show is happening at Ushaw College which just so happens to be a ten-minute drive away or an hour walk. And while transportation might be free, it came half an hour late. This would be fine if the show itself wasn’t already pushing two hours. Don’t get me wrong, the venue and location more than make up for it but waiting around for such a long time was frustrating. It’s a shame, because this show is hands down one of the most entertaining things I’ve seen all year.

If you want something to distract you from the end of term blues, have an interest in musicals or even if you just have experience with any kind of romantic relationship ever, I’d highly recommend I Love You, You’re Perfect, Now Change for a solid and relatable evening out. Just be aware that there’s no bar at the venue beforehand…!

I Love You, You’re Perfect, Now Change will be playing at Ushaw College on Friday 7th and Saturday 8th December at 7:30pm.