Review: I Love You Because

Jennifer Baker is  impressed with how DULOG’s collaboration with GDTC makes the most of this musical. 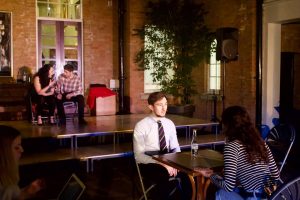 I have to say I was incredibly impressed by the opening night of DULOG’s production of I Love You Because – although, in hindsight, this was probably merely due to their valiant and generally successful attempt to breathe life into an insipid and slightly pointless musical.

I Love You Because is ostensibly based on Jane Austen’s novel Pride and Prejudice, transplanted into modern day New York City. Little of the vigour of Austen’s writing made it into the musical; however, this is not to say that DULOG’s performance was as lacklustre as the writing. Indeed, I felt that intelligent staging choices and choreography on the part of director Isobel Jacob and choreographer and assistant choreographer Rhiannon Hill and Kate Russell brought bursts of energy to the show which were lacking in the writing. Jacob made the decision to stage the musical partly in traverse which worked highly in her favour as it brought the actors much closer to the audience, keeping us all more engaged. The musical itself is a snapshot of the lives of six people and is anything but epic, but by keeping the production so intimate the minute details of each actor’s performance had far more impact.

I was particularly impressed by the choreography. In a show like this where the action is not centred up huge Broadway-style dance numbers with flashy costumes and set changes, Hill and Russell utilised dance only when necessary, creating moments of comedy and bringing out the characteristics of the music. Although on occasion the dance lacked energy on the part of the cast, it was dynamic and kept the production moving. I particularly enjoyed the more stylised numbers, in which the production team had thrown naturalism to the wind and brought out the real comedic nature of several songs. 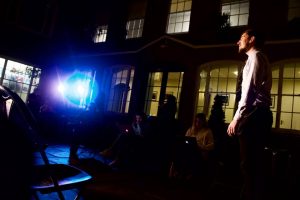 The action of the musical takes place over the course of a couple of months – I think? – but honestly it was difficult to tell. Whilst it was clear that the cast had spent time on characterisation, the show lacked a sense of development which made it difficult to chart the individual journeys of the characters. This made for a show which on occasion felt slightly over-rehearsed and lacking in spontaneity. The actors would do well to focus on really listening to one another one another on stage as sometimes truth and chemistry were missing from the relationships. Overall, however, the cast of six delivered some incredibly strong performances. Special mentions must be given to Katie Sterland as Brigitte the bar tender and Emily Hardy, who played Diana. Although she had arguably one of the smallest roles in the show, Sterland brought a burst of energy with her every time she took to the stage and was incredibly captivating. Hardy made use of her impeccable comic timing throughout the show and had an incredibly expressive face, with an impressive belt to match. The way in which all six actors worked together in the group numbers was, frankly, very good and musical director Becky Brookes and assistant musical director Hannah Ambrose must be congratulated for the tight vocal harmonies.

Sadly, the flow of the show was often interrupted by clunky transitions and awkward blackouts. The simple, minimalistic sets generally worked in the show’s favour, but the long and messy transitions between them sometimes began to alienate the audience from the action of the show. The band played throughout the majority of these, and I felt that had director Isobel Jacob chosen to deliberately make something more of these moments, they could have been really special, contributing to the storyline and character development. Aside from in these slightly chaotic transitions, lighting was generally used very effectively throughout the production, with different colours subtly used to evoke changes in location, time and mood. There were some balance issues with the microphones, as at points it was difficult to hear the words of the songs, but these problems generally improved throughout the performance – a certain amount of this was down to a lack of diction. However, for a first night, the production was impressively smooth.

I would whole-heartedly recommend a trip to see I Love You Because. It won’t bring anything challenging to the table, but will provide you with a light-hearted night off from the stress of summative season.