REVIEW: How to Succeed in Business Without Really Trying

On February 20th, Trevelyan College Musical Society presented their production of How To Succeed in Business Without Really Trying, a lighthearted satire of the mid-20th century corporate workplace and the means that one must go to in order to climb the ladder of success. Whilst not without flaws, the production was overall very enjoyable, and the hard work and passion that had gone into it was evident throughout.

The set design was cleverly put together, and touches such as the clocks which were arranged as though they should be showing times around the world, but in fact only showed the time in New York, added to the lighthearted tone of the show. In spite of the show demanding a relatively intricate set, transitions were well thought out and caused no sense of disruption. However, the amount of space taken up by the set, combined with the fact that the stage was not particularly large in the first 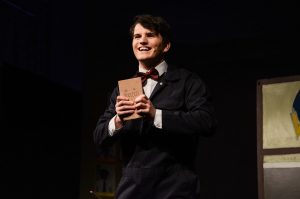 place, meant that there was not much room onstage, and group choreography or scenes with a higher number of characters on at one time ended up looking crowded and claustrophobic. Despite this, the set itself was generally well designed and effectively utilised.

The limitations of space onstage meant that Amy Singhsachakul’s choreography was not always brought to life as much as it could have been, and a handful of numbers felt lacking in energy. However, her choreography was very strong, particularly in ‘Brotherhood of Man’ and ‘Company Way,’ which were both energetic and engaging throughout.

Lucy Enright’s direction of the show was strong from start to finish, with full use of the allotted space and clear consideration of the appropriate tone for each scene. The vibrant campiness of the show came out in a delightful way, as did the satirical examination of corporate life and treatment of gender relations in the workplace; under her direction, the show was able to be melodramatic and, at times, ridiculous, without detracting from moments of tenderness or poignant social commentary. The many comedic moments landed well, and appeared as natural rather than forced. Overall, Lucy’s direction was able to bring the essence of the show to life – its comedy and campiness, but also its social commentary and moments of sincere emotional value.

The characters in the show’s exaggerated version of the corporate business world were brought to life by a strong cast all round. Alice Beaumont gave an impressive performance as Hedy LaRue, with both her affected voice and physicality lending themselves to an engaging portrayal of the sexually empowered airhead. Similarly, Amelia Rathbone’s Rosemary was deeply affecting and sympathetic to the audience, and remained enchanting throughout; in particular, her rendition of ‘Happy to

Keep His Dinner Warm,’ at once a love song and a commentary on the emotional state of neglected housewives, stood out as one of the strongest numbers in the show.

However, the two standouts of the production were Ben Bauman as Bud Frump and Charlie Procter as J. Pierpont Finch. Bauman’s Frump was as pathetically endearing as he was villainous, and his moments of comedy were utilised to their full effect; similarly, Procter’s Finch was an endearing and charmingly unpredictable lead, selling himself to the audience with his charm as much as his character does to his superiors. Procter was able to give a nuanced portrayal of someone ambitious and somewhat ruthless, but equally likeable and affable, and endearingly awkward in his relationship with Rosemary. His ability to bring the character to life as well as he did was much of what made the show engaging to the audience throughout.

The show was further strengthened by the clear thought that had gone into the costuming; bringing individual characters to life could be a challenge in a show which demands that they dress in suits, risking a dull homogeneity, but costumes had clearly been considered in depth. Details such as J. Pierpont Finch’s suspenders and bow tie, Rosemary’s costumes being almost entirely pink, or Ovington’s tie being absurdly short, added to their characterisation and the tone of their respective scenes very effectively. Such attention to detail was a significant strength of this production.

Overall, Trevelyan College Musical Society’s production was a charming and enjoyable one; though not without flaws, it makes for a lighthearted evening with intelligent handling of the questions raised by the show itself.

How to Succeed in Business Without Really Trying will be playing in Trevelyan College Dining Hall at 7:45pm from Thursday 21st to Saturday 23rd February.