Review: How Love is Spelt 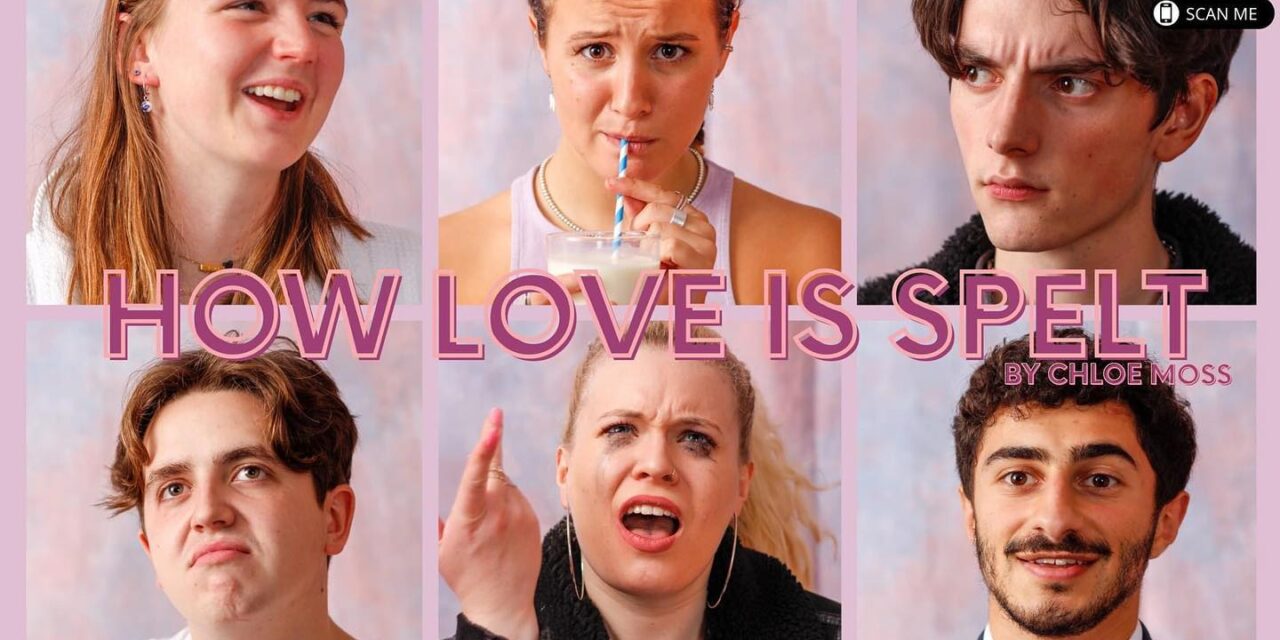 “so utterly and heart-achingly real”

An exploration of the loneliness, heartache and desire – How Love is Spelt presents a gut-wrenching performance, outlining the developmental struggles of one’s unique identity whilst trying to escape their own demons. A must-watch for students and theatre-buffs alike, I was admittedly left blindsided by the plot’s curveballs and rendered besotted by the performance. The co-directors, Alexander Bittar and Maddie Clark, have gone above and beyond to illuminate Chloe Moss’s work – combining the cheery, pink-tinted idealism of promised romance with a ruinous yet all too common wintry reality. With a bittersweet storyline, an outrageously talented cast and a spell-binding stagecraft, How Love is Spelt presents itself as a comedic tragedy so intensely real and relatable to the wider audience.

Following an enigmatic protagonist, simply referred to as ‘Peta’ – the play is peppered with witty and intuitive dialogue that does a good job of keeping the audience engaged throughout the duration of the performance. Each actor seamlessly succeeds at doing justice to Moss, delivering the script in a manner that permits the audience to reflect on their own selfhood without faltering in momentum. The casting is unquestionably immaculate, with each actor wholeheartedly embodying their role and excelling at maintaining an ethereal, almost dream-like atmosphere. Distinctly well-thought out costume design binds each performer tightly to their role, with the colourful clashing of gaudy prints particularly emphasising the mental decline of the protagonist as the plotline is unravelled. The exaggerated gesticulation of the actors only further enhanced the uncannily nightmarish undertones of the performance – a feature especially integral to a play consisting entirely of snippets of conversation. Throughout How Love is Spelt, I was bewitched by the unsettling ambience of the mise-en-scene – literally made to feel as a fly on the wall passively observing a casual, every-day conversation.

The beating-heart of How Love is Spelt is the on-stage didacticism between the actors, setting it apart from Moss’s written work. I cannot commend enough the strength of the cast – particularly Juliette Willis’ delightful execution as the leading role. Notably, the awkward and yet hilariously cringeworthy opening encounter between Juliette and Marcus Tapper underlines Moss’s characters scant ability to understand one another – let alone themselves. Marcus’s larger than life, laddish persona is especially humorous when combined with Juliette’s Peta to create a toe-curling, rom-com-esque opening encounter that left the audience itching for more. Zach Ismail strikingly portrays the jittery, lovelorn high-school history teacher with a string of memorable comedic lines, such as my personal favourite – ‘she wanted spontaneity, adventure…I said I can be spontaneous…I just need a little bit of time to plan’. Tabby Thompson’s channelling of a worn-down party-animal was side-splitting, skilfully adding depth to the character through the delivery of a flawless monologue – embodying the complex emotions surrounding her character’s lost pregnancy. I have to underline Noah Tucker’s exemplary performance as the cruel, explosive boyfriend of Petra. To flourish in such a reprehensible role is formidable, yet Noah pulls this off with impeccable ease. Alternatively, Jemima Abate’s portrayal of a sharp, stone-faced and yet undeniably caring nosy-neighbour instils upon the audience a remarkable feeling of security.

The technicality of the performance was absolutely astounding and really bought How Love is Spelt to life. Grayson Burr and Alex Hamilton excels at creating a powder-puff, pink tinged glow that lulls the audience into a false sense of security – only to be abruptly removed from this as the plot-line becomes clearer. The attention to detail of the setting and lighting felt so attentive and personal – with a massive credit to the two directors and the lighting designer, Alex Hamilton – for striking a perfect balance between comfort and claustrophobia through the well-furnished stage setting. I particularly loved how the lighting morphed from a comforting, dream-like and romantic solace towards a gaudy and interrogative spotlight as the storyline unfolded – warping the audience’s perception of Petra’s seemingly perfect life at a break-neck speed.

The co-directed adaptation of How Love is Spelt provides one with a taste of realism, delving into a plotline tinged with relatability and authenticity. Perhaps not the most uplifting of tales, the play is an excellent display of the young talent within Durham – with a plot that will leave you utterly heart-wrenched and yet simultaneously gasping for an encore. The promising co-direction of Maddie Clark and Alexander Bitter, coupled with James Hough’s work as head producer, leaves much anticipation for their next project. A bittersweet twist on a common romantic trope, the audience was kept locked into a fast-paced and engaging storyline – with a fully immersive stage setting. With a melancholic climax, I must note the audible cries from the audience as the show came to its disparaging close – with an ending that rendered the audience in emotional tatters. The thought provoking drama touched upon real-life issues, leaving me fully invested in Petra’s desperate story.

I can assure that anyone who decides to see the play will not be disappointed by this integrative stage adaptation – so utterly and heart-achingly real, the performance is so vividly, unashamedly human that it is a truly unmissable masterpiece for the winter season.