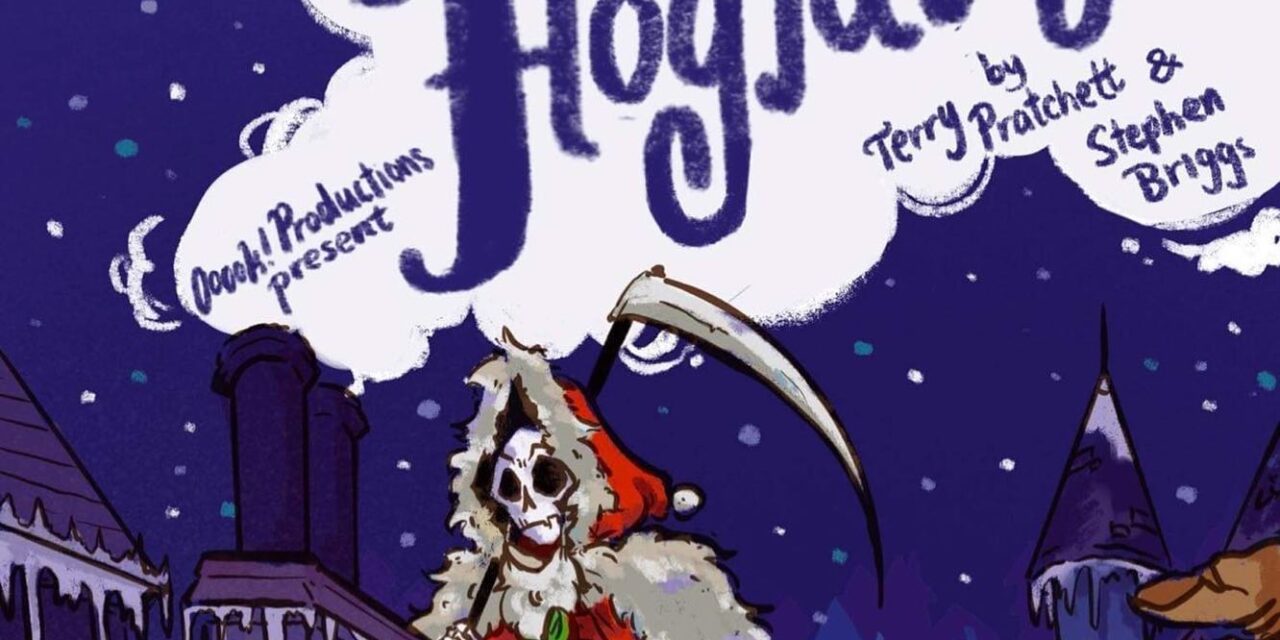 “The sheer fun had by cast and crew shone through, and the tech and costumes created some truly stunning visuals, a truly merry experience throughout”

As a die-hard Pratchett fan, and as someone who is very much currently in the festive spirit, I was so excited to go and see Ooook’s Hogfather as an end of term treat, and it definitely did not disappoint. The sheer fun had by cast and crew shone through, and the tech and costumes created some truly stunning visuals, a truly merry experience throughout.

Directed by Hannah Kisiala and her assistant Zoe Wilcken, the show took us into the Discworld and followed Mr Teatime’s (Thea Steadman-Jones) attempts to assassinate The Hogfather (Pratchett’s version of Santa) and the babysitter Susan’s (Beth Phelan) attempts to stop him. Steadman-Jones really stood out as the villain of the piece, portraying an emotionless psychopath to a scarily accurate level, serving up a strong contrast to Phelan’s business-like heroinism. They also both looked incredibly dapper in their costumes, which were stellar throughout. I was particularly impressed by the make-up on Imogen Melhuish, who led the show as Susan’s grandfather, or Death as he is more commonly known. Melhuish and the directing team impeccably put to life one of Pratchett’s most loved characters. Her voice, mannerisms and comedic timing were superb, as was Marc Twinn as Albert, Death’s assistant. The interactions between these two really kept the pace of the show going, where it occasionally dragged in other places. Eli Fuller as Billous, the hapless god of hangovers also provided some excellent comedic moments.

As someone who has worked on Ooook’s annual Practhett previously, I know the challenge that comes with the amount of multi-roling required. The directorial team and ensemble cast did a very good job of keeping up with this, creating very distinct characters to avoid confusion. Whilst some costume layering was a little obvious and misplaced, it was well done overall. Particular mention has to go to Ellen Olley for stealing the show in every scene she was in and having me in hysterics with some of her vocal range. Olly Stanton and Rhiannon Morgan both demonstrated their abilities as Ooook stalwarts with impressive performances, it was nice to see Stanton take on the role of the infamous Nobby Nobbs with true enthusiasm. Whilst I unfortunately don’t have the word count to explore every ensemble member’s performance, I must mention Partick O’Connell as the Narrator. He gave an excellent deadpan guide through the first act, and I must say I was disappointed to not see this character in the second act at all.

Of course, mention must go to the incredible production team and set designer Anna Hayward. I have never seen so many different flies and set pieces used in one show, and each was constructed immaculately. Kudos must go to the stage management team for keeping up with it all. The only thing I would change would be the scenes where Death and Albert were talking offstage, it would have been nice to see mini versions of the characters on the sled, as the first time this happened it was not immediately obvious what was going on. The lights also enhanced the mood of the piece, Dylan Bunyan and Aaron Lo demonstrated their full talents; I particularly liked the colour scheme in the Tooth Fairy’s Castle. There were a few occasional tech hiccups, but this is most likely due to first night nerves. The scene changes would have definitely benefitted from music being played during them, as the long silences slightly killed the momentum of the piece.

All in all, Hogfather, whilst not an entirely polished production, is certainly full of festive spirit and joy. Visually spectacular and fun throughout, I would recommend every get themselves down there for an early Hogswatch treat, which lovingly explores the nature of family and belief.