Harry depicts the turbulent journey of friendships and university life through two freshers’ love of Harry Styles. What begins as an innocent crush that brings two friends closer together, becomes more solemn as we begin to see that even Harry Styles is not powerful enough to keep two people from drifting apart.

Stepping into the wooden-panelled Union Chamber, the familiar sense of a university room immediately settled. The typical features were present with clothes loosely draped across various furniture, numerous bottles stashed about the place, a neon pink dressing gown and the odd pile of books which set the scene splendidly. Not to mention, the tower of takeaway boxes from the likes of Urban Oven and Pizza Base which really made the setting much more relatable (and realistic) as first year accommodation. 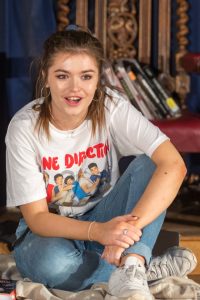 breaking the fourth wall and including the audience in their discovery of the infamous One Direction’s journey to stardom. With almost everyone of our generation knowing the all too familiar obsession of a famous artist, the play felt immediately welcoming. As the girls began their never ending internet stalking of their new favourite band, the ‘What Makes You Beautiful’ music video was projected onto the wall as they watched. This tool was a lovely touch as the audience can often feel excluded and detached when actors’ focus is on a computer screen but director Jennifer Baker successfully solved this.

However, the scene transitions lacked pace as the costume changes and subtle alterations to the set often went on for too long, making it feel sluggish and lacking urgency. The choreographed dances to different One Direction songs was a nice idea but the actors appeared to be slightly self-conscious. More energy was needed to give off the intended impression of two girls dancing in their room as if no one was watching. Nevertheless, the addition of Harry Styles posters on the bedroom walls was an effective way to highlight time passing and their passion of Harry growing.

Tagart had a stand-out performance with excellent comedic timing and the two girls shared some lovely moments of honest friendship at the start of the show. As time went on and rifts started to form between them, the use of individual monologues 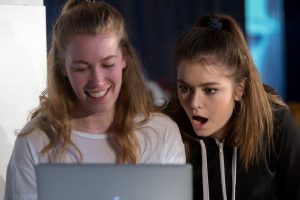 directed at the audience became integral to the production. They allowed each character to express their true feelings and thoughts that we all sometimes supress in order to keep up appearances. This was an outlet for the character as well as informative for the audience as we began to see the inner workings of Caitlin and Sophie’s friendship begin to deteriorate. Moreover, the outlet the monologues provided highlighted the isolation that many experience at university. Breaking the positive stereotype of university being the best years of your life was an important message in the show that was portrayed with skill and brutal honesty.

Overall, Harry was an enjoyable journey back down memory lane, bringing back memories of Hollister outfits, One Direction obsessions and choreographed routines that we all know too well and look back on with equal embarrassment and fondness. This play is unlike most traditional Durham theatre and brings great joy all those who watch it. For a delightful evening of throwbacks and the relatable life of University, I would look no further.

Harry will be playing at the Durham Union Debating Chamber on Sunday 9th December at 8:00pm.