It’s been claimed that, at any given moment, there is a performance of Hamlet taking place somewhere in the world; now it’s the turn of Gemma Macmillan-Fox’s production, an acutely self-aware adaption which shines new light on the script as a narrative of the very real assessment of how we treat mental health.

Upon entering the City Theatre’s intimate performance space, where the front row are less than a metre from the stage, it was clear we were not about to witness a lighthearted production; unsettling atonal music (composed by Barnaby Fryer) was played into the room and, combined with a smoke machine, created a disquieting soundscape for the rest of the evening. Indeed, lighting and sound were used effectively throughout, most notably the curtain at the back of the stage, used at various times as a space for various shadow performances including the ghost, Hamlet’s production of The Mousetrap, and Ophelia’s death.

Mental health quickly manifested itself as the central theme – Ginny Leigh’s first entrance as the eponymous Prince of Denmark saw her clutching a small bottle of pills, lending a new meaning to Hamlet’s quick reaction when Horatio and Marcellus walk in on him. Leigh’s performance as Hamlet was wholly believable, thoughtful and precise; it was evident that she knew the significance of every word she said, and was able to vary her tone and body language to present a complex and 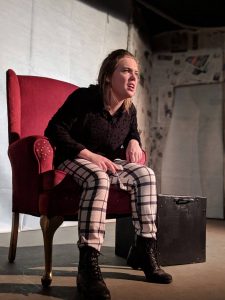 troubled character. The patronising attitudes of Claudius (Harry Twining) and Polonius (Tom Bracewell) to Hamlet’s ‘madness’ were humorous but unsettling – the audience found ourselves laughing, then wondered if we were culpable in their gross insensitivity.

Perhaps Macmillan-Fox’s most striking directorial decision was regarding Rosencrantz and Guildenstern (Ariana van Biljon and Jude Wegerer); normally presented as Hamlet’s close friends and fellow students, they were stylised as faceless medical professionals, white masks obscuring their features. As such, Hamlet’s address to them as ‘friends’ took on a bitter edge, as they inspected him with various instruments and devices, their usually friendly dialogue transformed into bureaucratic small-talk. Van Biljon and Wegerer delivered a chilling performance, often speaking in unison or bouncing off each other. The simple replacement of ‘England’ in Shakespeare’s script with ‘hospital’ quickly confirmed the sinister presence of the medics, not as Hamlet’s unwitting friends, but as Claudius’s agents.

Naturally, presenting Shakespeare’s longest play in just ninety minutes required considerable abridging of the script, but several key scenes were still given time. The gravedigger scene, led by Jack de Deney and Niamh Hanns, was worth retaining as a welcome (albeit brief) break from the dark intensity of the rest of the show. Considerable attention was paid to Ophelia’s narrative: Amy Porter’s performance was deeply sympathetic and delivered a powerful portrait of a young woman victimised by her careless father. Her final scenes were deeply chilling and disturbing, and seeing a drowned Ophelia walk across the stage after her ‘death’ was particularly harrowing and powerful to witness as an audience member; Ophelia’s narrative felt fully fleshed-out, rather than a mere companion piece to Hamlet’s.

Of course, no production of Hamlet is complete without some means of depicting the Ghost; John Duffett made something of a double act with Leigh, often echoing her lines or simply standing onstage to make his presence as a hallucinatory being felt. Indeed, for about half of the show he was sitting in the back of the audience, watching the action and waiting; those audience members who noticed him found it impossible to forget that King Hamlet was watching everything, or that Prince Hamlet’s psychological difficulties continued to plague him during other scenes.

Despite Hamlet being a play with so many iconic Shakespeare lines, this production avoided the trap of sounding like a recital of Shakespeare’s finest quotations; the cast spoke with fluency and assurance, and Leigh’s monologues felt thoughtful and deliberate. The actors were constantly on the ball and reacted well to events onstage; Twining as Claudius showed visible discomfort when Hamlet framed him with a play; Issy Flower (Gertrude) acted her slow, lingering death with skill and timing, and indeed the entire final death scene was well choreographed, if a little chaotic, such is the nature of a script demanding four characters’ deaths within as many minutes. Aaron Rozanski as Horatio delivered the final lines with poignant honesty and sensitivity.

This highly condensed version of a much-loved and frequently-performed classic was a fascinating take on the central themes of Hamlet, bringing out characters’ attitudes towards what they perceive as ‘madness’, and emphasising the very real struggles of mental health, all brought to life by a hugely talented cast and production team.

Hamlet will be playing in the City Theatre at 7:30pm on Friday 15th and Saturday 16th February.