Emily Winters and Becky Brookes give their opinions on TCMS’s latest musical offering. 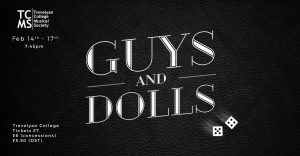 TCMS prides itself on being an entirely Trevelyan-run theatre company, and this production was no exception, two dep members of the band were the only non-Trevs students involved. The college should be very proud of their production of Guys and Dolls – it was a very fun evening displaying a wide array of talent and skill onstage. Guys and Dolls is a musical set in 1920s New York concerning the trials of two young couples, Sarah Brown and Sky Masterson, and Adelaide and Nathan Detroit, the struggling missionary at which Sarah works, and the floating crap shooting game which Nathan runs.

Polly Beaumont played a charmingly vulnerable Sarah Brown and sang exquisitely, particularly in the upper register. Particularly enjoyable was her drunken rendition of ‘If I Were a Bell’ whilst being babysat by a cynical yet romantic Sky Masterson portrayed reliably by Ben Cartwright. Lydia Blundell was also an audience favourite with her down-to-earth Adelaide bringing life to some wonderful gags, and there were some particularly beautiful reactions to James Cumming’s begging as the no-good and delightfully weaselly Nathan Detroit.

The ensemble singing was generally sound, and reactions to action were animated and varied. There appeared to be some costuming issues with ‘Take Back Your Mink’, but accidents happen and there is no one really to fault for that. The pace of the production lagged a little towards the end, perhaps the first night adrenaline having worn off a little, but I imagine that in future nights they will feel more comfortable with the performance having completed it successfully already. Congratulations to Millie Blair on the choreography, which was varied and very period-inspired with a few modern twists. Dance all round was a little shaky but this could be due to a few first night nerves in the ensemble. I particularly enjoyed the Havana scene, but it could be performed with more confidence: it is visually exciting, now they need to enjoy it!

Whilst technical effects in recent DST productions has been slammed for letting the company down, there was very little if anything to fault with TCMS’s lighting, and with sound there were a few odd juxtapositions between mics being switched on for singing and the preceding speech, but they were few and far between. The set was minimalistic, but the painted dated logos of recognisable brands set the period charmingly. The pink LED hotbox sign was very useful in designating location for the Hotbox numbers but needed to be fully off to save illuminating scenery changes and the entrances and exits of actors in the blackouts. It also threw the shadow of an actor waiting in the wings bobbing along to the overture against the wall nearest the band, although this did bring a smile to my face as they were clearly very much enjoying the music!

What made the performance special was the number of developed supporting roles. Lottie Dick’s Abernathy was wonderfully eccentric and had fantastic stage presence, her reactions to Beaumont’s opening speech providing a lot of comedy to, and goodwill from, the audience. Her solo ‘More I Cannot Wish You’ was excellently sung with confidence and character. However, the true unsung hero of the show by far was Danny Booth. From running from the police whilst enthusiastically eating a cucumber, to his marvellous rendition of ‘Rocking The Boat’, Booth was exceptional throughout.

Laura Buckingham deserves the highest of praise for the performance of the orchestra during the production. Every note from the pit was perfect save from the (deliberately) strangled brass of the missionaries’ band.  Particularly praiseworthy are the strings, who handled everything from lush romantic melodies in ‘I’ve Never Been In Love Before’ to the frenzied semiquavers of ‘Luck Be A Lady’.

Overall, it was a highly enjoyable performance which I would recommend to anyone, showcasing a wide array of talent of which the company and college should all be very proud, and to the company I will say: may luck be a lady for the next two nights.

Walking into a college dining hall as a venue, it is difficult to know what to expect, but I was pleasantly surprised at how Trevelyan College Musical Society managed to transform the room into 1940s New York. Guys and Dolls tells the story of showgirls, sinners, and soul-saving, and was the perfect romantic musical comedy for Valentine’s Day.

From the first note of the ‘Runyonland’ Overture, brass and reeds excelled in Frank Loesser’s score, and the orchestra, under Laura Buckingham’s direction, were a real highlight for me. Credit must be given to the musical directors for the sheer volume of music covered, in a variety of styles, which was performed to a very high standard, especially given such a short rehearsal period. In a similar vein, Millie Blair must be commended for her choreography of the musical. Moving from the Latin flavour of the Havana scene, to the flirty Hot Box girls, the different dance styles were showcased well by the cast. I particularly enjoyed the way in which all of the ensemble were used in the larger numbers, despite ranging dance abilities, and Blair’s ability to adapt to this truly shows her skill. Aside from a few first night nerves, the dancing was generally to a high standard, with my personal favourite being the ‘Crapshooter’s Ballet’.

Guys and Dolls as a piece heavily showcases the four leads, who in this case, balanced each other out nicely. Polly Beaumont shone as the straight-laced ‘Sergeant Sarah Brown’, displaying a beautiful soprano range, and a consistently focused character, which proved her versatility as an actress. Although some of the mid-range notes could afford a little more support, she gave a very confident and watchable performance.  While the chemistry (yeah, chemistry), took a little while to blossom, Beaumont was well matched by Ben Cartwright, as ‘Sky Masterson’. For an actor with ‘no previous experience’, he shows incredible potential. Despite a few moments of concentrating on high notes or difficult singing, his characterisation was nice, and I look forward to his next role! The characters of ‘Adelaide’ and ‘Nathan’, played by Lydia Blundell and James Cumming respectively, offered a nice contrast from the other couple, although it did seem to take them a while to relax into the roles. When they did, both actors received a lot of laughs from the audience, which I hope will continue. Blundell placed a lot of her characterisation on her chosen voice, which at times detracted from her singing. This was a shame for me, as it’s clear she has a good voice, as proven in ‘Marry the Man Today’, which was enjoyable to watch. Cumming showed excellent comic timing as ‘Nathan’, and despite some slight vocal inconsistencies, he portrayed the role with ease. Supporting roles were well cast, although at times diction was a little sloppy and lines were lost. It was clear that some actors were making the most of smaller roles, and Hal Lockwood and Lottie Dick should be commended for this, as they stole pretty much any scene they were in. For me, however, the stand-out performance of the night was that of Danny Booth as ‘Nicely Nicely Johnson’. From the high harmony at the end of ‘Fugue for Tinhorns’, to the outstanding ‘Sit Down You’re Rockin’ the Boat’, characterisation was on point, Booth did not miss a beat, and he certainly did not disappoint.  I thoroughly enjoyed the performance from the ensemble as a whole and although there were a few rough patches of slightly underprepared scenes – when they came together, they were excellent!

The lighting design by Mark Thistleton was used effectively both during and between songs, to differentiate the various moods and locations of the show. This complemented the clean and simple set design, allowing for well-executed scene changes, which were also well timed with incidental music. Sound designer Rowan Evans did an impressive job of mixing for many vocalists and a large band, and this was done without the usual first night hiccups we come to expect from an amateur production. My only comment regarding this was that occasional underscored dialogue was lost, because of the choice to only use microphones for singing. This led to a few abrupt beginnings to songs, but meant that all the solo singing was clearly audible. Costumes and props were used effectively in bringing the 1940s to Trevs, and made the production look as good as it sounded.

Guys and Dolls will be playing in Trevelyan College Dining Hall at 7:45pm on the 15th, 16th, and 17th February.