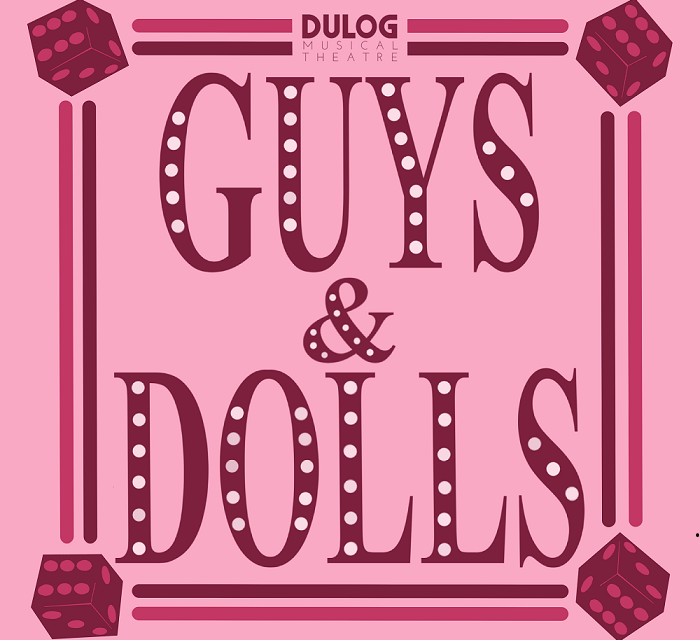 As highly anticipated as DULOG’s annual gala show is, the 500 person capacity venue seems apt for the quality of theatre we are used to seeing from them. Yet the Gala Theatre remains a difficult, albeit impressive, space to fill.

The grace of this show came in the form of the delightful endearing, Flo Lunnon and Olly Stanton as Miss Adelaide and Nathan Detroit, respectively. Amongst a sea of somewhat dodgy accents, theirs stood out as the most valiant. Stanton’s physicality and intonation were masterful, and his large facial expressions were well judged in the vastness of this performance space. His comedic timing was similarly impressive, as he never pre-empted a joke nor tried too hard for laughs, instead letting these come naturally. Similarly, Lunnon’s use of voice was not only hilarious but also unfaltering. Her impeccable characterisation continued into her effortless singing performance, as did Stanton’s. I do feel she could exploit her lower register more, on occasion, for comedic effect, and shouldn’t be scared to really lean into those deep vocal growls. Both exhibited great chemistry and were nothing but likable when gracing the stage.

The wind and brass sections held up the pit orchestra with their mastery of their respective instruments, however, the sound mixing was sometimes jarring – percussion was too far forward within the mix, with the strings barely audible. This became more noticeable in the second act, where the scraping sound of an over-rosined bow was heard when their solo motifs were so exposed. They struggled to blend with the brass section upon its entrance, and rather distracted from Harry Allderidge’s moment as Arvide, although he remained skilfully tuneful despite this.

Ollie Fabb’s conducting was, as I have come to expect, perfect. He has the ability to bring vocalist and band together seamlessly; the accompaniment never late on entrance, with tempo changes navigated beautifully smoothly. Similarly, vocal musical direction from Tom Klafkowski must be commended for the impressively executed harmonies within the ensemble, complimented further by their energy and enthusiasm onstage.

The sets were also outstanding – a testament to the professionalism expected of a DULOG production in The Gala. The same professionalism was unfortunately not matched in the clunky, overly-long set changes, thus sacrificing the audience’s suspension of disbelief with every loop of the intermission music (a valiant attempt to fill these long gaps between scenes). Unfortunately, microphone levels were also unbalanced from the first vocal entrance: Samuel Jones’s already high, soaring voice dominated over Alexander Bittar and Olly Stanton. Yet the lighting was effective, balanced, well-timed and well-levelled, thanks to the excellent work of Martin Ramalingum, alongside the entire dedicated tech team.

The most successful choreography was seen in the large dance numbers such as ‘Take Back Your Mink’ and ‘Sit Down, You’re Rockin’ the Boat’; both were able to be executed cleanly despite the large ensemble size, and thus more impressive and enjoyable to watch than the more ambitious sequences. The dance ensemble, particularly the female section, spent quite a fair bit of time crashing into each other while executing their complex choreography. However, it feels more likely that the space was simply too small, albeit the Gala Theatre, for the number of dancers within the cast.

Tom Cain exhibited a magnetism on the stage as Sky Masterson; he is a gifted storyteller who captivates and pulls audience focus, all with an impeccable accent. Cain’s only undoing came in the fact of the show being a musical: he struggled with timing in several of his solos. Lucie Fletcher, as Sarah Brown, was also well-cast due to her angelic singing voice and impressive vocal range. However, she did lose some power when mixing between head and chest voice – only a minor shame as elsewhere her singing was near-faultless. In her acting she did excellently with the more familiar tropes, such as her drunk scene and pining over Sky with Adelaide – however, her Christian missionary scenes could have benefitted from her feeling more comfortable on stage. It was only a shame that the writing didn’t allow for the same character arc that Lunnon and Stanton’s characters were afforded; it would have been delightful to see more of Sky and Sarah onstage to support their chemistry.

DULOG’s ‘Guys and Dolls’ lacked some of the overall polish the company is so known for, and yet, despite that, remained a fun and high energy show for the Gala’s mammoth prestige.