Imogen Usherwood dives into Pitch Production’s ‘Gutted’, the headline of a week of taboo discussions.

The headline act of Pitch Productions’ week of ‘What We Aren’t Supposed to Talk About’, Gutted is a piece of experimental fringe theatre by Liz Richardson and Tara Robinson, which has been reimagined by director Hannah Roe. A one-woman show, it follows Honor Halford-Macleod as Liz on her experience living with Ulcerative Colitis – and it is just as hilarious, uncomfortable and challenging as you would expect.

Upon entering the Dowrick Suite, the stage is set for an experimental evening, which clearly has the taboo topics of disease, bowel movements and, yes, poo, at its heart. The floor is lined with plastic sheets (a promise that something is going to get messy), and the set is scattered with yoghurt pots, toilet rolls and get-well-soon cards. The most striking item on stage is 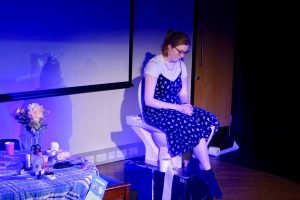 without doubt the toilet, which is used at various times to represent a bed, a chair and even a person. Halford-Macleod spends this time before the show milling about on stage, making the play itself feel more believable and less performative.

Indeed, Honor Halford-Macleod proves herself to be a highly capable and diverse actress in this show. Over the course of an hour-long, one-act play, she embodies upwards of a dozen characters, from a Welsh ex-boyfriend to a kindly Geordie nurse to an angry Scottish passenger on a bus. We are able to keep track of this huge cast through the screen at the back of the stage; every character or chapter in Liz’s story is announced with a new slide. At times it is hard to keep up, but this does not detract from the individual significance of each character or the overall storyline.

The contribution of technical team Helena Trebichavska, Fergus McShane and James Goodall does not end there – Gutted thrives on creative sound, lighting and graphic design throughout. Occasionally Halford-Macleod hands over to a voiceover of herself or a short video, giving an interesting texture to a show which, with only a single actor, could risk being monotone. Rather, the creative team have clearly enjoyed exploring a multi-faceted production with all sorts of mediums; Halford-Macleod uses her own body as a canvas several times.

The show also dwells into audience participation, a format usually reserved for stand-up comedy or farce, calling on audience members to read messages from Liz’s mother and husband. These moments are touching and engages this 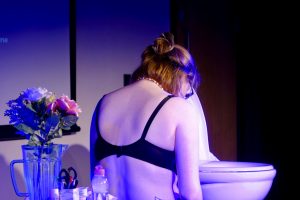 performance of Gutted with its roots as a show at the Edinburgh Fringe in 2017. Rather than picking on individuals, Halford-Macleod makes an earnest appeal for audience to volunteer, a process which actually gains more involvement than choosing ‘victims’ as so many shows do.

In terms of its place in Pitch Productions’ week of taboo topics, Gutted is unafraid to address the realities of living with a bowel condition, but without becoming unpleasant to watch. The creative team does not shy from representing bodily fluids onstage, or discussing the objective medical reality of having the large intestine removed. Halford-Macleod presents these topics with a charming frankness and warm humour, laughing at herself and telling extending an offer of friendship to the audience.

Gutted is a unique play for its confident honesty, its willingness to make a mess and enthusiasm to tell an important story. It is an urgent, uplifting show, brought to life with an obvious amount of love and dedication from all sides. Not many productions make you feel grateful for your own digestive system, but Pitch Productions have brought this thought-provoking script to life with love and and immense skill.

Gutted will play in the Dowrick Suite in Trevelyan College at 3:30pm and 7:30pm on Saturday 15th June.