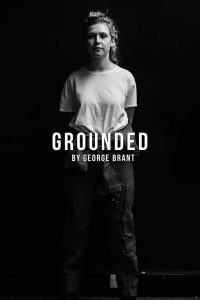 Lion Theatre Company’s Grounded, directed by Qasim Salam and written by George Brant, is the story of an unnamed ace fighter pilot in the American Airforce, whose career is cut short by an unexpected pregnancy and the demands of family life. She must give up flying for piloting military drones from a trailer in the Las Vegas desert, and remotely hunt down her targets. Slowly, the pressure of 12 hour shifts and being cut off from what she loves takes its toll, and we watch as she loses her grip on what it means to be guilty. This production was ultimately a story of isolation and obsession, bleakly poignant and pertinent to current concerns about privacy and increasingly grey morality.

Staged in Empty Shop’s new TESTT space near the Viaduct, you are immediately brought into a liminal space, putting you somewhere that feels completely detached from everyday life. After ringing the bell and buying my ticket, I walked up several flights of stairs under florescent lights, only to find myself in a narrow corridor that led to an art gallery. Beyond that, lit by spotlights and coloured LEDs, there was an office chair, surrounded by an army of folding chairs. Already it felt like something almost dreamlike, something both real and unreal. The carefully chosen location added a lot to the overall experience, a bold but effective move from director Salam.

As a one person show, the quality of the acting was extremely important to the piece, and Steph Sarratt delivered on every conceivable level. She played The Pilot with an amazingly engaging energy. Everything about her, from the consistent and carefully created physicality of The Pilot, to her speech patterns, right down to the way she drank water captured a very special, almost understated kind of military rigidity and intensity. Sarratt managed to make the unnatural nature of her monologues into something very natural and free flowing, narrating invisible people with such certainty that she creates a whole world on stage out of nothing but an office chair and accurate mime. Although her comedic timing was slightly off, she gave quite a hardened character a level of humanity that made the audience truly sympathise and feel for her somewhat unrelatable dilemma.

Director Salam was clearly very interested in studying The Pilot as a character rather than playing with themes in the script. There were lots of thematic concerns about power, religion, the universal nature of humanity, destiny, and parallelism that we as an audience were left to mull over on our own. But the stripped down staging, lighting, set design, and even small size of the audience meant that he could pick apart the character of The Pilot under the microscope, as we watch her every move and action in a way that mirrors the plot presented on stage. As it was essentially a character study, the piece felt extremely intimate, and the director had clearly done everything in his power to make the piece as intimate and immediate as possible.

Of course, no piece is perfect. Technically, I feel this piece is somewhat muddled. There were many very effective uses of lighting, particularly to highlight the unnatural, frightening atmosphere of the trailer from which she pilots her drone. The grey LED lights lighting our main character from above cleverly highlighted her cheekbones, making her appear somewhat skeletal. Furthermore, lighting was used to suggest scenes, which was also very effective for such a non-naturalistic piece. But there were also a few lighting cues that felt somewhat out of place and slightly nonsensical, especially towards the beginning. Similar things can be said for the use of sound. Whilst it was generally used quite effectively, it was also used very literally, aside from one instance where it was used in quite an abstract way. A few more abstract sound cues would have lifted the piece a lot, perhaps helping to show the deteriorating mind of The Pilot more clearly, or to intensify certain moments. The production team were very limited with their resources in the space, and it was impressive what they were able to do with so little, but a few extra technical elements would have really added to the storytelling.

Overall, Grounded is an engaging and incredible piece of theatre, drawing you into a world so clearly that you feel the lines between fiction and reality blurring, and will leave you with things to mull over and consider for hours after you leave the room.

Grounded will be playing on the 25th and 26th November at 8pm at TESTT Space, 25 North Rd.