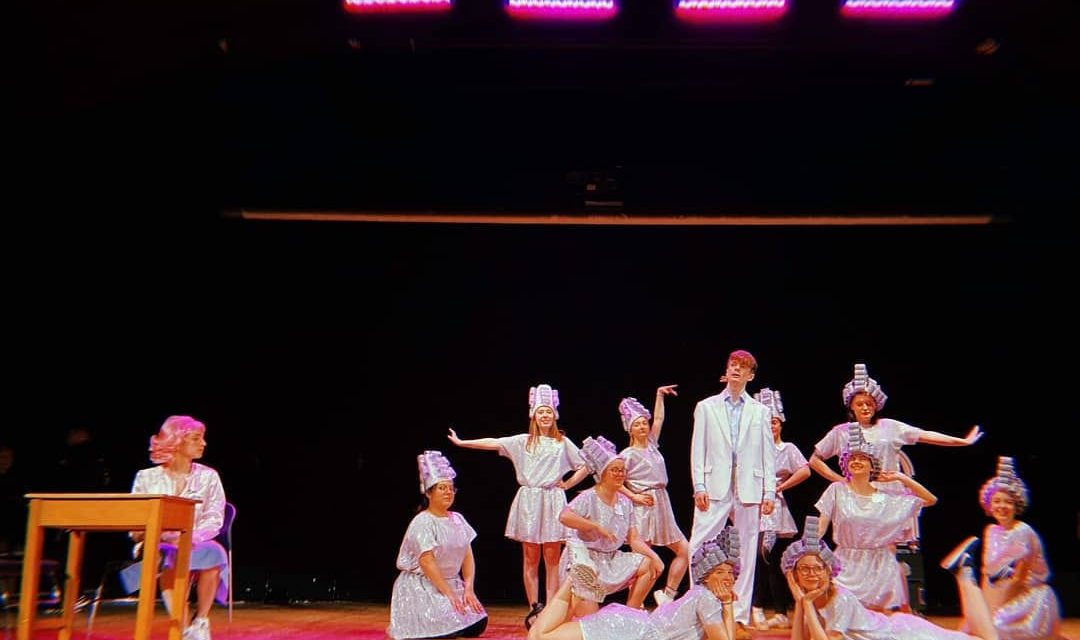 Despite not being much of a musicals person, I’ve always had a place in my heart for Grease. Is it the 50s aesthetic? The soundtrack, with banger after banger? John Travolta’s second best role (after Oscars presenter)? Whatever it is, it’s got that special magic. However, I’d never seen it on stage, and so was excited when Feather Theatre Company announced they were putting it on.

The first thing to know – the stage version is different to the film. The story and structure both have huge differences, and there are a lot more filler songs throughout. Unfortunately, you can understand why the film cut these songs; they’re mostly bland doo-wop tunes that fail to live up to hits like ‘Summer Nights’, and you can tell the difference in the cast’s energy when performing the songs we know from the film. That said, this is a problem with the musical, not the production, and the cast still gave their all in these songs, with special mention to Ben Cooper in ‘Those Magic Changes’ and Avery Winningham in ‘Freddy, My Love’, who aced their solos. The songs featured in the film are done justice by the cast, with my personal favourite being a particularly enthusiastic rendition of ‘Greased Lightnin’’. ‘You’re the One that I Want’ and ‘Summer Nights’ were similarly entertaining, although the latter was unfortunately let down by mic problems and an overly loud chorus, which led to Danny and Sandy being drowned out.

Overall, the cast were very impressive in their roles. The American accents were admittedly a bit iffy throughout, with the exceptions of Molly Kavanagh as Frenchy and Nina Hayward as Sandy, who put a lot of their fellow castmates to shame. There was also an unfortunate number of missed cues and fluffed lines, which ended up damaging the punchlines to a fair few jokes (which could well just be first night nerves).

Despite these nitpicks, it was obvious that the cast had put a lot of work into this show. Hayward as Sandy was the star of the show for me; ranging from shy and sweet to her final leather jacket clad entrance, she was absolutely convincing. Her singing, especially in ‘Hopelessly Devoted to You’, was jaw-dropping, and she had a confidence in her projection on-par with professionals. Similarly, Aoife Walter as Rizzo stole the show in multiple scenes. Not only did she perfectly capture the character’s sassy attitude, she also understood Rizzo’s more insecure moments. Her singing had both power and clarity behind it, and you could hear every word sung. Adam Trusted was an impressive Danny, though admittedly lacked projection when he couldn’t depend on a microphone. That said, his swagger was undeniable, and his physicality very effectively portrayed this with every hand run through his hair. He also impressed in the singing, hitting some incredibly tough notes at the ends of ‘Summer Nights’ and ‘Sandy’. In the supporting cast, Alexander Kisby as Kenickie deserves mentioning for his charisma throughout (but especially in ‘Greased Lightnin’’), as does Kavanagh’s Frenchy for her pitch-perfect characterisation and accent.

As previously mentioned, there were multiple problems with the microphones throughout. Some were too loud, some too quiet, and some just couldn’t catch the actors’ voices, although this was mostly dealt with effectively by the cast. However, this was the only issue I had with the tech side of things. The lighting cues (designed by James Goodall and operated by Chloe Winham) were all perfect, even with complicated spotlights. The transitions were long, but that’s expected for a play with so many scenes in different settings, and the stage crew still managed to be slick. The choreography was impressive, but got a bit messier in the larger pieces such as the first ‘We Go Together’. That said, ‘Born to Hand Jive’, a very quick and complicated dance, was very impressive, and you could tell that a lot of work had been put into it.

Ultimately, despite some small issues, Lauren Spowart and her team have created an entertaining production of one of the best musicals of all time. If you’re looking for a fun show to see over the next few days, this will almost definitely be the One that You Want.

Grease continues in Caedmon Hall, the College of St Hild and St Bede, on 28th and 29th February at 7:30pm.