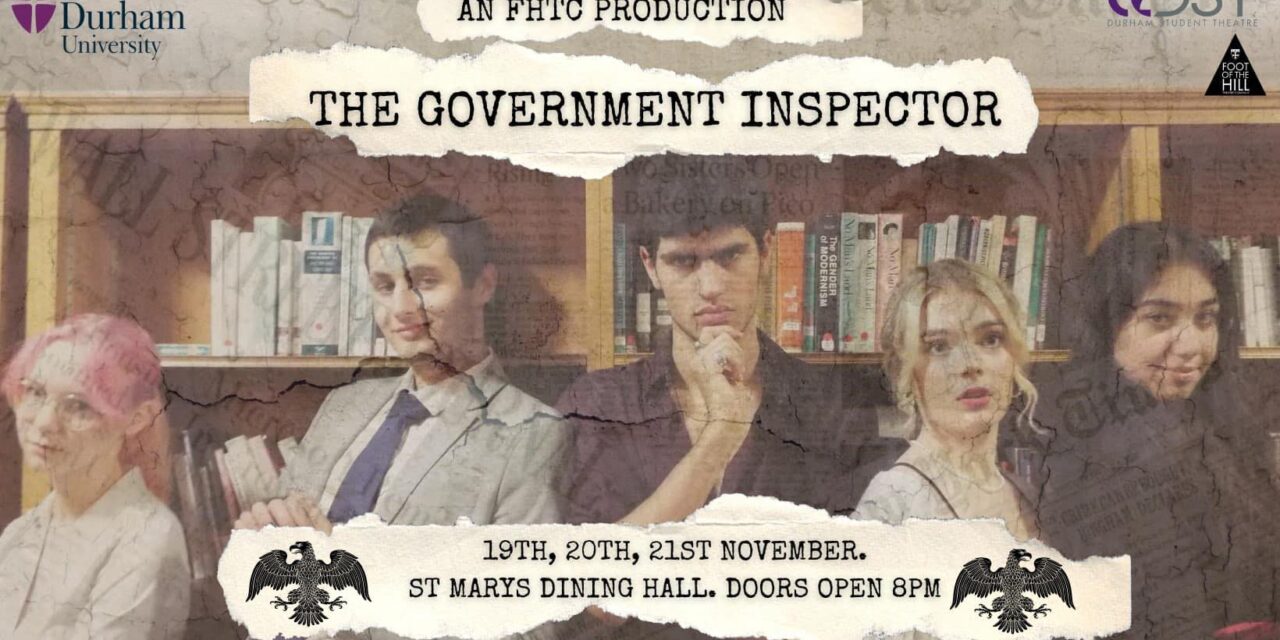 Foot of the Hill’s ‘A Government Inspector’, directed by Jacob Velucci and Alvi Lindborghkoh; Produced by Jacob Marshall and his team of Shannon Hill, Ella-Rose Vella and Gwilym Davies was a farcical chaos from start to finish.

We follow a timeless classic satirising human greed and stupidity as story of deception and self-deception in which the townspeople of a small Russian province deceive themselves into believing that Hlestakov is the much-revered Government Inspector, a situation much capitalised on by the devious Hlestakov.

Hlestakov brilliantly portrayed by Jay Boyd is the epitome of a Durham ‘lad’: recklessly spending money as he waits to be bailed out by Daddy, with a habit of promiscuously unbuttoning his shirt to gain the attention of an attractive woman, the attentions of whose mother are also fair game.

Staged in Mary’s dining hall the set was simple and functional, but this was in stark contrast to the energetic and caricatured nature of the characters and their presentation with all members of the cast using great physicality and gesticulation to demonstrate reverence and awe to Hlestakov. There were however occasional lighting issues which sometimes unfortunately resulted in poor visibility of those on stage.

The original text was clearly the foundation of the play, but moments of immense comedic value were added through frequent (often expletive) modern interjections which provided moments of great comic relief from the sometimes-intense narrative detailing within a scene. I really appreciated the directorial choice to place a homosexual lens over certain aspects of the play including the relationship between the mayor and Hlestakov which certainly got very steamy at times, this felt like a unique interpretation of the text and certainly garnered many laughs.

I must credit the performances of Naoise Wellings and Rowan Sutton as Bobchinsky and Dobchinsky respectfully. This comedic duo had brilliant chemistry and burst onto the stage with an unrivalled energy that was maintained throughout the performance, relaying off key narrative details at such a pace and interjecting with perfect comedic timing. Rowan must have developed a headache from Naomi’s shouting and wailing which was given such full commitment and presented a distinct contrast between the two.

Credit must also be played to the rest of the townsfolk who acted as a form of chorus and were often accessories to the action. All the actors stayed visibly engaged whilst on stage, giving such vigorous and excessive facial expressions which were very effective at demonstrating the collective opinions to the action on stage. The camaraderie within the cast was evident and there was a real supportive attitude within all involved.

A refreshing and innovative presentation of a classic text with a cast principally consisting of Freshers whose enthusiasm for performance was evident demonstrates a promising future for Foot of the Hill Theatre Company.