Review: The God of Carnage

Grace English dabbles in the carnage of FTC’s latest production. 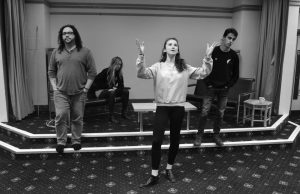 Yasmina Reza’s black comedy, The God of Carnage, translated by Christopher Hampton, reveals the descent of a meeting between parents over an altercation between their sons from a civilised, if strained, effort to resolve the conflict into a clash of personalities and the eventual carnage to which the title refers. Feather Theatre Company presented what was, overall, a strong interpretation of the text, making excellent use of the set and costuming in particular to convey a chaotic and destructive human nature lurking beneath performance of civility.

From the very beginning, the atmosphere of tension was made apparent through set design; the designers made use of the small space to present what could pass for the cosy, if somewhat pretentious, home of the Novaks, with a musical sequence at the start, emphasising the effort to which they both go to pass it off as sophisticated, yet as tension builds, the room begins to feel cluttered and claustrophobic: precisely the environment in which the explosive carnage that makes up the heart of the play needs to take place. Rather than detracting from focus on the actors themselves, the set allowed the audience to fully appreciate the sense of entrapment felt by the characters that leads to their descent into violence and aggravation. 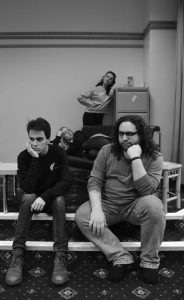 Though the actors may have stumbled at occasional points, no stuttered or misremembered lines were significant enough to truly detract from their performance, and they were all able to portray the complexities of their characters to an impressive extent. Though Joseph Batuello as Michael did initially struggle to enunciate, making his line delivery less engaging than it could have been, he did a brilliant job in portraying Michael’s forced levelheadedness and eventual eruption into the ‘Neanderthal’ nature abhorred by his wife, and should be praised for a very convincing performance. Nicholas Tansley was also fantastic in his portrayal of Alan, as a slick and sleazy lawyer that comes to demonstrate a sadistically individualistic and misogynistic outlook, and Nicola Samosa as Annette was equally successful as the dissatisfied trophy wife whose frustration at her husband’s neglect eventually drives her to mania. Particular credit should go to Alice Lassman, who gave by far the most engaging performance as Veronica; she remained fully committed to the character through her facial expressions, intonation, and strong delivery, and stood out throughout the whole show as the strongest performer.

Xana Littlewood and Matt Wojcik’s direction demonstrated consideration of the play’s central themes. Whilst the atmosphere remained civilised, the actors made ample use of the space, such as through Alan walking in front of the stage itself when having one of his many sleazy phone calls. As the carnage begins to emerge, the blocking becomes tighter and more constrained, emphasising the sense of claustrophobia and pressurisation leading to explosion. The positioning of the characters served to demonstrate the emerging social divides, with Veronica and Annette on one side of the stage, and Michael and Alan on the other, the misogyny of the latter becomes visually present onstage. At times, the blocking could have been more dynamic; the chaos did not always feel fully realised, due to the lack of physical action. However, overall, the direction of the production was strong and greatly enhanced its value for the audience.

Overall, Feather Theatre Productions presented a production of Reza’s The God of Carnage with a strong cast and a clear understanding of the text, creating an engaging and entertaining evening for its audience.

The God of Carnage will be playing in Van Mildert College at 8pm on the 5th and 6th December.