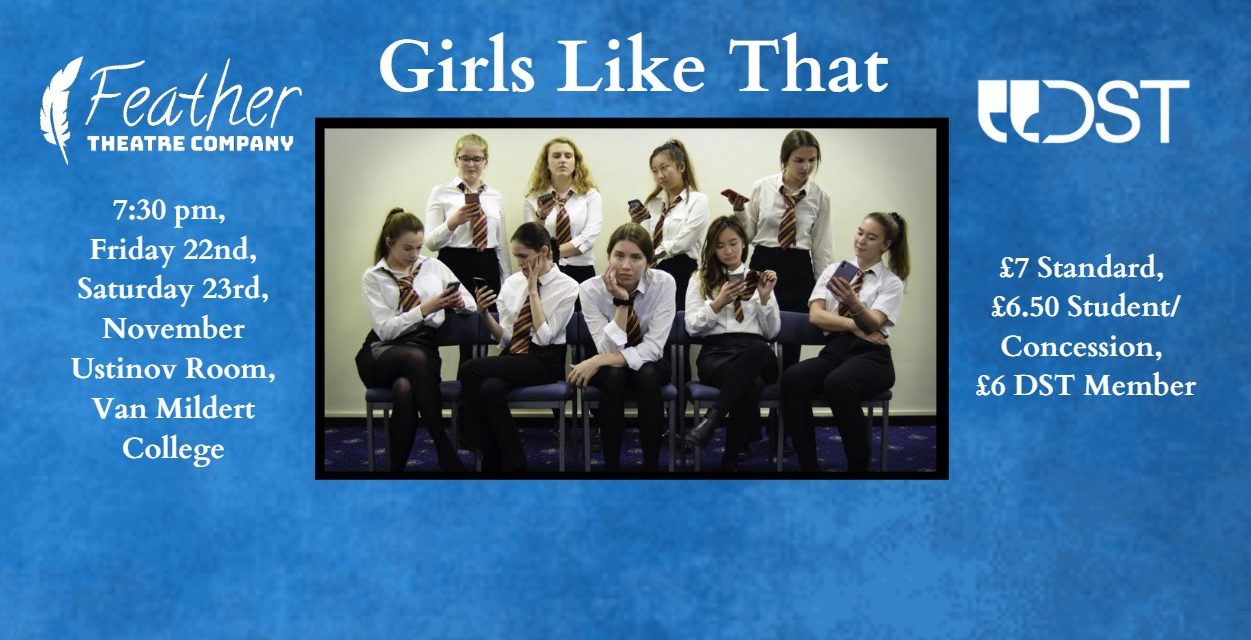 Feather Theatre Company’s production of Girls Like That by Evan Placey offers a poignant and touching exploration of some of the contemporary hypocritical aspects of female empowerment ideologies, the inherent uncertainties of female friendship and the loss of privacy in an increasingly technological era. Directors Ben Chennells and Victoria Soh deserve great recognition for successfully delivering a compelling modern story in a highly poetic and theatrically ambitious style.

The play tells the coming-of-age story of a group of ten schoolgirls all the way through high school. Friendship bonds and notions of sexuality are tested when a naked photo of Scarlett, a girl from their year, goes viral and follows the aftermath that ensues. Even before the start of the play, in what I considered an interesting and creative decision, the show comers were greeted with a semi-static tableau-vivant of the nine schoolgirls sitting onstage on a single horizontal row. Legs crossed, heads bend, and gaze glued to their lit phones. This immediately helped set the mood for the rest of the play, placing technological communication at the very heart of the play, as well as showing the possible isolating effect it has on social groups.

One of the most important elements in this ensemble-type play is the female-led chorus. The nine schoolgirls whose lives and ensuing friendship we follow throughout the play are a constant presence onstage, a living backdrop of voices that tell of the events and collectively voice the developing notions of feminist ideology most of us are fed through our lives and the realization of its hypocrisy and the gender-bias on double standards. The whole ensemble deserves high praise for successfully maintaining a fast-paced, energetic rhythm throughout the duration of the play. Even within this multiple-voice narrative style there was room for some noteworthy moments. Laura Thomas’s character breaking the fourth wall to draw parallels between school social life and the ‘pecking order’ was made even more funny by the assumption of a child-like wonder at the cleverness of her own comments. Occasionally, there where moments this multiple-voices technique saw its effect diminished when some of the lines got muddled, disrupting the flow of the narrative but following with quick recoveries. The overall success of this element in the play speaks volumes as to each of the cast’s individual talent as actresses.

Adela Hernandez Derbyshire’s role as Scarlett was an interesting one. She certainly manages to make the most of her initially sporadic presence onstage while being the centre of the conversation revolving around her naked body and self-worth. Her silent presence only enhancing the feelings of how the violation of privacy can also strips away the victim’ ability to take back control her own narrative. However, at the end of the play she delivers one of the most memorable speeches, and this in great part due to Adela’s fantastic ability deliver a heart-wrenching message about the reclaiming of identity in an unflinching manner that shows what a great actress she is.

The constant use of black-outs for fast scene changes meant the play acquired a vignette-like episodic quality that propelled the fast-paced narrative forward. However, this constant intermissions between scene changes meant that the large cast on stage got sometimes disoriented and left scrambling to rearrange the correct position before the light return, making these moments seem rushed and clumsy. The occasional tinge of colour washes helped make transitions clearer and broke the monotonous tone set by the black outs. Peppering the play at various moments are brief dance choreographies set to modern feminist anthems by Beyoncé, P!nk and Katy Perry, and while their presence adds an ironic undertone on the hollowness of their message, some of these performances felt repetitive and rushed through.

In a play where storytelling is made an art form through the strong female presences on stage, I wish to give special recognition to Charlie Culley’s performance. Her command of pacing, voice alteration and physical mannerism made her anecdotal interjection specially compelling to watch. On this note, I would like to give special recognition to Jenny Pavitt who, besides being the Assistant Producer, stepped in to fill the role of ‘Girl with Flowers in her Hair’ at a very short notice. Her performance of one of the interjecting feminist monologues was beautifully delivered and she proved herself to be a talented actress in her own right.

Girls Like That is most definitely a must-see production. It offers a compelling and thought-provoking narrative about the present-day interpretation of feminist ideologies and empowerment in a world where notions of female sexuality and body image are a popular currency in social media. This cast full of strong actresses and actors have proven themselves more than capable of handling a complex and innovative new way of storytelling through theatre.

‘Girls Like That’ will play in the Ustinov Room, Van Mildert College, on 23rd November.