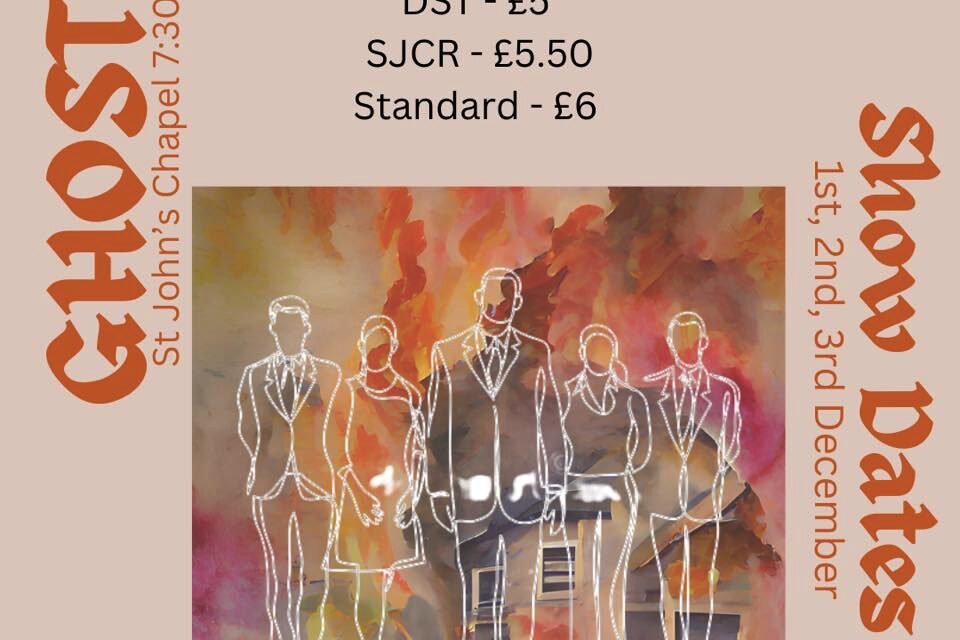 I attended the Bailey Theatre Company’s production of Ghosts on Thursday 2nd December, the second performance of three. Directed by Peter Houston and produced by Catherine Wilcox, this challenging piece of theatre took place in what I would describe as the perfect choice of venue- St Mary the Less, St John’s very own chapel. This being the first BTC production in this venue, I was excited to see how the space would be used.

I was greeted by intense violet lighting (a credit to Miles Balderson’s tech management) and haunting organ music (played beautifully by Jonjo Palmer). The props further helped to set the scene- simple, yet effective in creating the image of a 19th century stately home: sizeable, classic leather-bound books; candles dimly illuminating the room; several glass ornaments including a single vase of flowers; and a wooden table with two chairs.

My building anticipation was cut by a sudden blackout marking the beginning of the play, and our first impression of what was to come was an intense exchange between Regina (Daisy Mitchell) and Engstrand (Ben Rook). Engstrand’s physicality was played very well, maintaining a limp throughout, and Regina’s characterisation thoroughly convincing.

The costumes were well-thought out: perhaps there would have been more uniformity if Engstrand was also in black along with the rest of the cast, but most striking was Mrs Alving’s costume: her tight bun and red lip conveying a realistic image of a restrained widower, ‘rotting’ away in her own house.

The rumbling sounds during periods of conflict successfully built tension within the audience, and the stage placement brought satisfying parallels: the women often sitting obediently to the left of the table with their hands in their laps, the men on the right, and characters dramatically leaving the table and coming to the forefront each time conflict began to arise.

Pastor Manders (Matthew Cook) made a strong impression right from the first entrance. We witness his stance as the embodiment of morality unravel before our eyes as he realises his demand upon Mrs Alving to maintain a façade many years ago and his accusation that she has failed as a mother and a wife, paired with a tendency to defend the immoral actions of the men in the community, have had dire consequences. We watch as history repeats itself as he urges Regina to obey the wishes of her father. His stark criticism being suddenly replaced with shock as Mrs Alving reveals the truth to him was expertly portrayed in the facial expressions and body language of Matthew Cook. This comes to a climax when he exclaims at the end of act 2 that the fire in the orphanage (strikingly introduced onto the set by bright red lighting) is a moral judgement from God, and yet instantly at the beginning of act 3 it is revealed that he set the fire himself, leading to repeated, moving exclamations that he will be ‘crucified’.

Mrs Alving’s cynical eye rolls in the background of Engstrand imploring Pastor Manders on his knees for forgiveness were particularly engaging. Overall, the acting was incredibly convincing, leading me at times compelled to shout at the characters out of frustration for their actions, and reaching its peak right at the very end of the play with the extraordinarily moving end scene, where we watched mascara pool under Hannah Kisiala’s eyes as she contemplated the subject of euthanising her own beloved son.

Ghosts, written by Henrik Ibsen in 1882, has been described in the past as a ‘scathing commentary of 19thcentury morality’, and this production certainly pulled this off seamlessly. The loud and powerful outbursts from all of the characters, including most notably from Osvald Alving (Alexa Thanni) as we gradually witnessed his health decline due to inherited venereal disease, were raw and powerful.

Despite an extremely powerful first act, each act of the three somehow was more engaging than the last. The taboo subjects were subtly alluded to through knowing looks and hinting tones, such as would have been at the time of this prescriptive generation, and the stigma around discussing mental health and other personal subjects was heavily emphasised by the pastor’s criticism of all who tried to broach these topics.

This was a hugely challenging piece of theatre that was highly controversial at the time and therefore a brave choice of play, pulled off extremely well by this talented crew and cast. I look forward to attending more Bailey Theatre Company productions in the future.