tuesday feels like an experiment in pace. We’re presented with a standard schoolboy coming home from a classic day to have an average time before his friend comes over and shares in his mediocre afternoon. Jack Firoozan and Grace Longman excel in their meaningless conversation about nothing, taking us back to when all we could talk about was house parties, and all that mattered was avoided.

Naturalism is a bold style for writer Andrew Cowburn to employ. Watching Firoozan’s character Dan come in, put music on, eat hula hoops and then play with his phone slows the pace to static. After five minutes on stage, we begin to wonder if Firoozan is actually going to fall asleep, so content does he seem in relaxing and behaving normally despite the room of people watching. I’m not sure whether this allows us to forget we’re in a theatre, or whether we just feel a bit odd so intently watching Firoozan sprawl out on the sofa. Without the indie pop playlist, there would be a terrifyingly awkward nothingness being observed for much of this play – we’re simply waiting for Sophie. Dan’s casual nothingness lacks the intensity or purpose which could make nothing interesting. We’re not drawn into observing our subconscious, everyday habits being critiqued -because there’s a pop playlist blasting out to diffuse any tension. Instead, it’s just a slow beginning that would be better suited to be occurring whilst the audience find their seats and the show is understood to have not commenced yet. But this is a short play, so perhaps this beginning would have been less significant in a longer piece.

Once the script kicks in, Cowburn’s dialogue is smooth and realistic. There are some nice typical behaviours included, especially due to the equal genders being represented. When Sophie agrees to go interrailing with a girl just because “She’s got 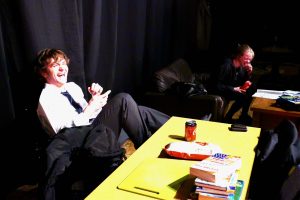 no one to go with”, the audience laugh at Dan’s typical teenage boy response of “Why’s that your problem?” The relationship between the two characters doesn’t seem to be romantic, and at first it seems possible they’re family, which is a nice representation of platonic cross-gender friendships being possible, even in high school. There are also some nice cultural issues thrown in lightly – “it’s not like listening to him [XXXTentacion] I’m telling people to beat up their girlfriends and murder nine people” seems a wry statement about endorsing artists actions. Dan’s ringtone seems to change each time it rings, which as a technical inconsistency is a bit frustrating.

Their conversations are banal and their concerns amusing, and this is a good nostalgic memory of timeless afternoons in adolescence. As Sophie, Longman smoothly portrays an awkward teenager covering herself with fake confidence and clichés. Her energy is the perfect foil to Firoozan: they overlap and interrupt each other perfectly, although the conversation’s intensity and lack of pause seems slightly anachronistic with their ages – they seem to put more effort into smoothing the conversation than most teenagers are able. Firoozan becomes believable as a character once Sophie has left – his fist-clenching, jaw-grinding, hair-fluffing and furniture smashing provides all the energy the rest of the play has lacked. When angry, Dan finally becomes an interesting and emotive character, as articulate in his ranting as a scripted lawyer.

We’re all dealing with our own problems. School’s over, but as long as sixth form leavers’ hoodies are still being worn about Durham, DDF is going to be packed with nostalgic high school hang-ups.

The Fire on Beacon Hill, by Harry Jenkins

“The thought of her was always there to catch me, when everything felt too new and strange”. This is a play about friendships from home. Astrid comes home from her first year at uni and reunites with her old friends, after a whole year: “I’ve been trying to change”. We spend just over half a year at university, and yet it’s expected we’ll find our true selves and make a new life – so what happens with the 20 weeks back at home? What happens to the relationships with those who made you who you are? And how do you respond to that cringing question of how you’re finding university?

Without ever stating it too explicitly, Harry Jenkins has addressed all these questions in The Fire on Beacon Hill. Through the innovative setting of a witchcraft ritual on Beacon Hill, Jenkins has grabbed a common thought process and addressed it fully. Witchcraft is an interesting frame, and allows some new faces to appear on the Durham drama scene. Francesca Haydon-White stars in the central role of Kyla, the “sister superior” who has got her friends into performing weird hillside rituals. Haydon-White does a stellar job as a seemingly withdrawn, pensive and hesitant Kyla who can gain confidence from performing witchcraft to chant with wide-eyed ecstasy. She sings with intensity and clarity, creating an eery atmosphere in the

But Astrid, Jo, Beth and Ellen qualm any fears we might have of this being a spooky children’s story. Daniella Frankal steps comfortably into her naïve and extroverted role of Astrid, the bold and energetic opposite to Kyla’s mysticism. It soon becomes clear how well-rehearsed these girls are becoming in summarising a whole year’s worth of experiences into a single, satisfying experience.

Some of the directing could have been more developed, had there been more time. Although efficient, the synchronised standing and sitting of the cast seems a little forced. Moments of revelation become melodramatic in their hysteria, risking dismissing the subjects they breach. At times, it feels like the actors need actions, rather than unnaturally standing up to deliver a monologue, then sitting down again. Most irritatingly was when one character declared they needed to wee, then put a jumper on, over the top of their dungarees – a wholly impractical action, as anyone who has ever gone to the bathroom whilst wearing dungarees would know. Jenkins trips over trying to find reasons to make his characters exit the stage. At one point, one claims they need to get some air: as though sitting on the side of a hillside in the dark was somehow now a stuffy office affair.

Jenkins establishes vibrant personalities in a short space of time, and alongside his directing team of Grace English and Hannah Roe, has cast each character with careful perfection to articulate this. As Beth, Molly Goetzee is funny, excitable and the outspoken ‘lad’ of the group. Jenkins contrasts this with Jo, played by Michelle Grace, as the sarcastically savage one. The moment Ellen brings out her brownies, and they’re all sat crossed-legged, it becomes very Enid Blyton – but Kate Middleton masters this ‘motherhen’ role within the group. Like any well-made play, a stranger is introduced to spice up the action in the form of the character of Milla, performed by Alice Swann. This is a particularly tricky role, which Swann handles with sensitivity and conviction. Her lip-chewing, shrugging demeanour delivers a stand-out performance.

The Fire on Beacon Hill is bold and odd and absolutely relevant – improved only by the relatively fresh choice of casting which suggests new blood on the Durham theatre scene with much to offer.

Kay and Rex, by Madeline Horton

“You look a little pale”

After marrying her co-star Rex, Kay Kendall won a Golden Globe award in 1957 but would be dead by the end of the decade. Based on the famous 1950s Hollywood power couple of Rex Harrison and Kay Kendall, Madeline Horton has brought to life a small insight into the conversations they must have had, the turmoil Rex must have felt, and the condescension Kay unknowingly dealt with. Kay and Rex explores marriage, fame and social construct.

This is a period drama with all the trimmings. Francesca Davies-Caceres sparkles as Kay Kendall beside Tom Jacobs as Rex. Their costumes are natural and practically fitting, with a set that is charmingly reminiscent of an Oscar Wilde parlour. Their conversation is fast and articulate, hurtling along at such a pace as to be more about style than substance. You get the feeling they are going through the motions of conversation, with the characters fluctuating naturally between conflict and resolution but continuing to neither of them say what they really want to say. It feels like a car journey with your friend’s posh 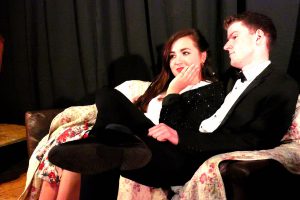 Horton affords Kay some cutting lines about the state of their society. “Men are ridiculous. They like to keep everything a mystery” is a lightly spoken sentence which summarises all the problems Kay is dealing with, unbeknownst to her. As she struggles to understand why Rex is so keen that “We don’t need to talk about you doing anymore work”, the couple circle one another and Kay becomes slowly, tantalisingly, more frustrated beneath the flirting, polite small-talk. In one moment, Kay bites back at the “orders of that neurotic doctor” and all the façade and smoothness is rubbed away, with Davies-Caceres demonstrating strong, human and heartfelt clarity as Kay momentarily crumples. Similarly, when Tom Jacobs speaks in soliloquy, the pace is slowed enough to glimpse honesty and humanity beneath the blasé bravado.

For most of Kay and Rex, the pace is a relentless duel of words that leaves us mostly confused and waiting for the clever witticisms which are never given time to fully settle in. Their posh drawl is smooth, every sentence carrying the same pattern of intonation, and this rapidly feels draining. Something real is lurking, and just needs to be developed into greater clarity. Nevertheless, Jacobs and Davies-Caceres offer a flawless rendering of Madeline Horton’s fresh writing.

General Programme 3 will be playing in Caedmon Hall at 7:30pm on Friday 8th and Saturday 9th February.