Emily McLean is impressed by the talent displayed in TDTC’s Freshers’ Showcase.

TDTC’s Freshers’ Showcase provided an opportunity to those keen fresh we know and love to dip their toe into the Durham Student Theatre scene, and show us what they could do. We were promised a night of solos and duets from ‘overdone musicals’ (their words, not mine), and indeed there were plenty of classics on the menu.

The evening kicked off with Gracie Baker’s rendition of ‘There Are Worse Things I Could Do’, Rizzo’s feisty ballad from Grease. Baker lived up to every cliché of the quintessential Pink Lady – exactly what we wanted from an evening of ‘overdone musicals’. She used the space well, connected with her audience, and her beautiful voice filled Hatfield Chapel entirely. Later in the set, Baker performed a duet from Wicked – ‘What is this Feeling?’ – with Jasmine Doyle. Doyle, in particular, used facial expression to great effect to portray her ‘unadulterated loathing’ for her partner. Both girls used strong, simple choreography to tell the story, facing opposite sides of the audience as if appealing to us to pick a side in the musical dispute. Natasha Bourke gave us her rendition of ‘I Feel Pretty’ from West Side Story. Bourke brought the innocent energy of Maria as she appealed to the audience to join her in her puppy-love daze. Despite some problems with diction, Bourke truly brought the character of Maria to life.

The first duet of the night was between Rose Galbraith and Theo Tobias, who sang ‘All I Ask of You’ from Phantom of the Opera. I was truly blown away as the two delivered the song with purity and affection. There was not as much movement in this particular number, which allowed the audience to focus entirely on the beauty of the voices. Galbraith and Tobias’ sublime and understated storytelling illustrated the connection between their characters without the need for melodrama. I can see these two going far in the DST musical scene – Tobias sang not one, but two songs from Les Misérables, so whenever you’re ready, DST, you’ve got an eager Marius waiting in the wings.

Lucy Little presented two characterful songs in the showcase: ‘A Spoonful of Sugar’ (Mary Poppins), and ‘Anything You Can Do’ (Annie Get Your Gun), in duet with George Simms. In both, she used her physicality and facia 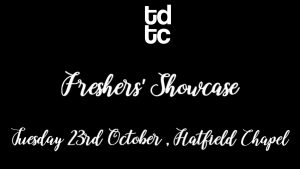 l expressions to create engaging characters that often had the audience giggling. In the duet, choreography was used to amplify the already comedic song – when squaring up to each other, it became clear that Little lives up to her name compared to the much taller Simms. The pair really seemed to be competing with each other, as Simms won the battle for the longest note, leaving Little out of breath.

Would an ‘overdone musicals’ showcase be complete without someone singing Cats’ ‘Memory’? Fortunately, Lamarisa Barclay stepped up to sing musical theatre’s old chestnut, with some pleasing variation from the original. Barclay seemed to bring her own phrasing to the song, updating the faded classic that everyone knows so well. The performance was simple and commanding, and Barclay must be commended for performing like a powerhouse in spite of some apparent nerves.

A personal highlight of the evening was Olivia Jones, singing ‘She Used to be Mine’ from Waitress. Despite being unfamiliar with this musical, I was impressed with Jones’ sweet voice, and I was surprised to find that I really cared about the character, and the journey she went on in the space of just a couple of minutes of singing. Her duet with Harriet Lang later in the set, of ‘Single Man Drought’ from I Love You, You’re Perfect, Now Change, showed a completely different side to her. Both performers were witty, punchy, and sassy. The audience was completely captivated as they desperately confided in us; their timing was impeccable and I truly pitied their hopelessly boring dates (played by Tobias and Simms).

The night closed with a final number from Lang, ‘Astonishing’ from Little Women. While Lang certainly portrayed the frustration of unromantic Jo March, at times I struggled to understand what she was saying. The quick tempo of the song didn’t help, but a little more attention to diction would have improved things. Lang really grew into the number, and her hopeful performance was a nice note to end on (no pun intended).

Although the showcase was plagued with tech issues throughout, the performers were true professionals, remaining focused. The only acknowledgement of the problems came when a technician scurried on stage, fixed the mics, and ran off again, apologising – the real star of the show. This evening was a wonderful introduction, both for the freshers and to them, as the audience were introduced to the next generation of DST musical theatre stars.