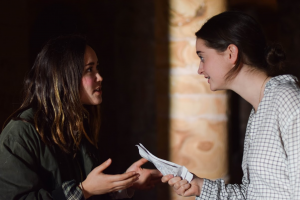 Long and gruelling this term has been, and it is this reviewer’s humble pleasure to inform you that CTC’s latest venture is neither long nor gruelling, but an entertaining winter night’s theatre. Foxfinder sets its scene in a farm in rural England that becomes a pressurised prison for its characters. The ever-atmospheric and ominous Norman Chapel provided a wonderful setting for this piece, its towering columns trapping the actors in its centre; this tight, tense environment provided the structural basis for the subject matter of the piece. In this world, foxes are Public Enemy Number One, as presented by the state, hunted and demonised nationwide – any who harbour or help them are Public Enemy Number Two – and the language and structure employed can be translated to any equivalent for ‘foxes’ in modern society.

However, once you get past the intriguing allegorical mise-en-scène of its world, the script of Foxfinder doesn’t really reinvent the wheel in terms of dialogue, and as such is reliant on animation through good characterisation from the cast; luckily, it has it. The energy in this play, particularly for its first half, is sustained by tension between Owen Sparkes’ William Bloor, the titular finder of the titular foxes, and the family being investigated; this tension, in turn, is sustained by a unilaterally high standard of acting. Sparkes’ Foxfinder is nuanced, well-thought out in both physicality and delivery, and pairs a good dollop of menace with a healthy sprinkling of what could be called charm. One of the most interesting dynamics as the play went on was William’s growing internal struggle; watching the Foxfinder be made to question his whole world while isolated in this pressure-cooker situation made for thought-provoking viewing.

Sarah Cameron and Tristan Robinson also deliver strong performances as the family under investigation; Cameron’s Judith is the bedrock for much of the building tension, with a strong portrayal of a character fighting back against the stress of her situation; Robinson’s Samuel explores the extremes of how far a person may be pushed in such a world, and forces the audience to consider the power that fear, rumour and suspicion can have. His progression throughout the play is especially well paced and nuanced; as the climax nears, Robinson’s presence grows more and more intimidating with each scene, layering on intensity and the sense of looming doom. 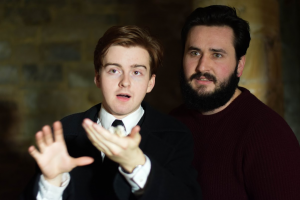 These characters are well-formed, and the setting helps build this tension, but it is also this play’s worst enemy; this first night’s performance had several strong scenes of characterisation punctured and deflated by the need to navigate the dark chapel. Blackouts were this show’s main bane, with less than sharp transitions working against the Foxfinder team’s desired effect; the Norman Chapel is a dramaturgical double-edged sword, and one pays the price for its atmosphere with a need to be doubly attentive to the limits of the space. It struck me that dimming lights rather than full blackouts, as well as more rehearsed, slicker planned transitions would help reduce the damage, to tension and crockery, done by this problematic space. Additionally, the pacing of some scenes could be fractured by liberal shouting, though again this is perpetuated by the space; it is quite the echo-chamber in there, and the cast would do well to choose their moments to hurl their lines around it, and to nuance their intonation more delicately at times.

Yet these are dynamics that niggle at one’s enjoyment of this show, rather than cripple it. All in all, Kimran Rana and her team can be proud of a strong performance, that can mainly improve itself by focusing on maintaining its tension more securely throughout. In terms of acting and atmosphere, CTC’s production captures the feeling of paranoia well with some excellent nuance in characterisation and intense rapport between the cast; relevant and interesting in subject and convincing in performance, this show is a fine display of acting and a stimulating evening’s theatre.

Foxfinder will be playing in the Norman Chapel on the 7th and 9th December at 7:30pm.