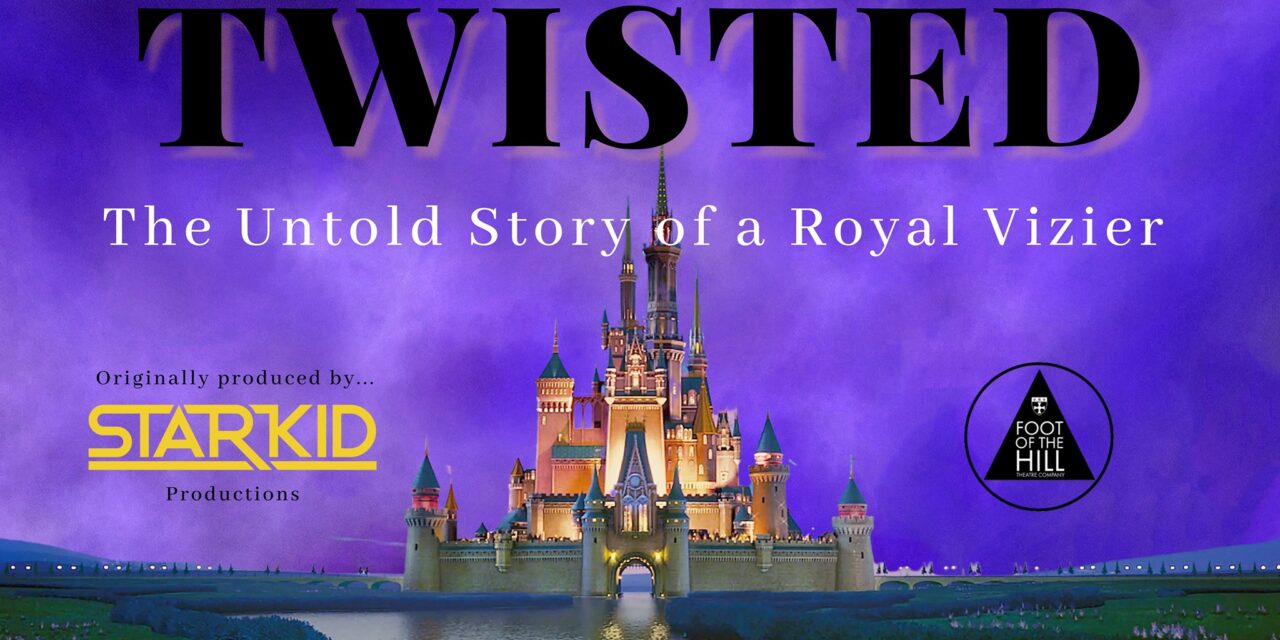 Foot of the Hill Theatre Company presents the musical, ‘Twisted: The Untold Story of a Royal Vizier’. This original Starkid Productions performance explores Aladdin from the twisted perspective of Ja’Far, a royal vizier. Charting the story of the evil sultan Mickey Mouse, his spoilt daughter Princess Jasmine, and the hero-turned-predator Aladdin, ‘Twisted’ is a refreshingly humorous retelling of a children’s classic. Chock full of shock factor and expletives, FHTC delivers Disney turned dark.

Director Olivia Swain, supported by her assistant Ben Johanson, have created an extraordinary piece of theatre. Seemingly and astoundingly unmarked by the shadow of the pandemic, the crew and twelve-strong cast of triple threats have managed to pull off a polished and professional production in only two weeks. Supported by a fantastic live band, this show impressed musically, and the choreography of Hannah Lydon should be applauded for adding the oft neglected aspect of dance to this musical.

In terms of the visuals of this production, the set design appeared to be a touch too fairy-tale for this tradition defying story, with a lack of phallic-like turrets (but of one of Aladdin’s many jokes), leaving the audience wanting. The costume design, however, was excellent. The costumes worked just enough to allow for the characters to be recognisable but weren’t taken too seriously – as attested by the use of yellow marigolds for Gaston’s gloves. Furthermore, Rhiannon Morgan’s and Jonathan Yeap’s technical offerings were more than satisfactory, implementing steady spotlights, a plethora of gels, and dynamic fight-scene flashes.

Yet it was the talent of the acting ensemble which contributed the most to the roaring success of this performance. FHTC showcased some of the finest of Durham’s theatrical talent, and kudos should be given to those responsible for casting. Tansy Adams, who played the Princess, excelled within her role. Blessed with the best American accent of all, Adams was the standout performer of the piece. Her physicality was energetic, her acting authentic, and her singing truly beautiful. Endowed with fantastic stage presence and emotional sensitivity, Tansy was able to fully command the stage as a soloist and I would peg her as the rising star of DST. And turning to the princess’ inappropriately aged love interest, Keir Mulcahey’s Aladdin was also exemplary. Confident, funny and talented, with the voice of a true Disney prince, Aladdin justifiably received the loudest applause from the live audience.

Additionally, Jacob Freda, who mainly played Achmed, the antagonist ruler of nearby Pixar, was a comedic delight. Amazing in terms of diction, vocality and timing, Freda appears able to take any role within his stride. Moreover, due to him eliciting the most laughs by far, the audience, as well as the camera, absolutely loved him. However, I personally feel that leading man Dylan Hicks unfortunately succumbed to the plight of the protagonist. Whilst he did indeed carry the show, showcasing great talent in the process, he also did not overwhelmingly stand out, albeit merely on account of the less interesting nature of his role. Furthermore, whilst the vocal talent of the cast was undeniable, many of the cast threw away their lines during the songs, which was a real shame considering the comedic genius of the lyrical dialogue. That said, this is a flaw easily fixed through experience and annunciation!

Lastly, as with any performance, the chorus make or break the show, and in this case the chorus truly triumphed. Performing exceptionally well as a group, with the voices of the five harmonising beautifully, the ensemble numbers were some of my favourites. Taking on multiple roles each, they all showed great adaptability and variety, meaning that a larger chorus, typical for a show such as this, was not missed at all. Special acclamation must go to Aimee Dickinson and Olivia Jones who achieved the tremendous feat of maintaining stage presence and personality as puppeteers. Olly Stanton’s voice also shone from the very beginning, a performer I would very much enjoy seeing in a more principal role.

To surmise, ‘Twisted’ was a roaring success of comedic theatre and the talented cast were aptly supported by an equally praise-deserving crew. FHTC are seemingly going from strength to strength, with this performance being the jewel in their crown, and this reviewer is very much looking forward to what St Mary’s resident theatre company comes up with next.

‘Twisted’ is playing until the 11th July, filmed in the Assembly Rooms