Ellie Farrell is underwhelmed by her first experience of Ooook!’s Pratchett play. 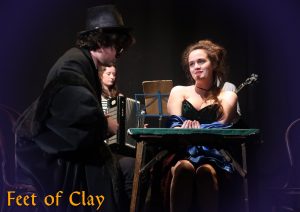 When Patrician Vetinari falls victim to the world’s slowest assassination attempt, the role falls to Commander Vimes and the rest of the city watch to find the culprit. Ooook! Production’s adaptation of Pratchett’s ‘Feet of Clay’ demonstrates some attempts at originality and merit but ultimately lacks in its execution and is arguably a little lengthy in its duration.

Uday Duggal’s Commander Vimes and Kyle Kirkpatrick’s Lord Vetinari were among the strongest performances; Duggal’s Vimes was suitably over-worked, troubled and short tempered and Kirkpatrick’s turn as the arrogant, snivelling but intelligent Vetinari was also fitting characterisation (and no doubt the similarities to characters such as Draco Malfoy were far from coincidental). Other good performances included Ruth McTieman’s Dragon King of Arms and Layla Chowdhury as the new guard Cheery Littlebottom. However, it is a shame that some of the other performances did not equal this standard; some of the delivery was a tad clunky, and some scenes passed too slowly owing to a lack of chemistry between the actors onstage. It is a discredit to the potential of the script that the action felt ‘stuck’ and slow at times. 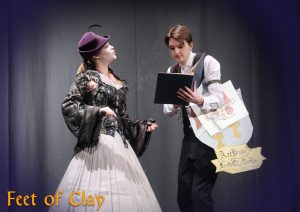 Unfortunately, the play suffers from severe pacing issues. The inclusion of some scenes seemed unnecessary, whereas other plot-lines (such as the ‘romance’ between Angua Von Uberwald and Captain Carrot) are neglected and under-developed. As a result of this, some parts feel laborious, whilst others pass by in a whirlwind and almost feel like ‘throw-away’ plot-points. On account of this, for a murder mystery, the urgency and suspense are seemingly lost. The strongest scenes arrive at the play’s close when the method of murder is revealed, and an exchange between Vimes and Vetinari takes place. The comedy and political satire lands in this moment, it is simply a shame that some of the earlier scenes lacked this same flow.

It is clear that hard work went into the direction, and the use of the Assembly Rooms Theatre’s space was well-utilised, but often scene transitions were far from smooth and inadvertently comical. However, perhaps these offences can be forgiven owing to it being the first night of the performance. Despite this, it is true that further polish is required in terms of these transitions and line delivery.

The using of lighting and sound was fairly well executed; the spotlight on Vetinari’s desk was amongst the most effective of the technical effects employed. This constant emphasis on his small portion of the stage reflected how his slow descent towards ‘death’ drove the play’s plot, even if he was not onstage or interacting with others. The set itself was fairly authentic; the stage felt full owing to both the large cast and well-embellished set.

Adapting Terry Pratchett’s works is no doubt a difficult task and an ambitious undertaking owing to its fundamentally esoteric nature. With this in mind, one feels compelled to commend their efforts although it does feel like a somewhat jejune attempt. It is possible that Pratchett’s work is perhaps not to my taste, but the testament of any exceptional production is the ability to make even the most niche subject matter accessible to a wider audience. Sadly, this performance aims for greatness but falls short of the mark.

All in all, the production was not Terry-ble, (unlike that pun) but, it was far from the theatrical triumph I was hoping for.

Feet of Clay will be playing in the Assembly Rooms Theatre at 7:30pm on the 16th and 17th February.