For their traditional third term sitcom, Ooook! Productions have chosen to adapt the beloved series Father Ted for stage, taking four of the most memorable episode from the first series and bringing them to life before and around you. Director and adapter Emily Winters was able to bring the classic television show to wonderfully engage with a twenty-first century audience whilst maintaining the wit and humour that made the original series iconic to many generations of fans. The production is funny and enjoyable, offering both an homage to the show’s die-hard fan-base as well as providing an entertaining entry point for those who have never seen Father Ted before.

It is fitting that Ooook! Productions chose to stage this religious satire in the Old Elvet Methodist Church, with the venue itself 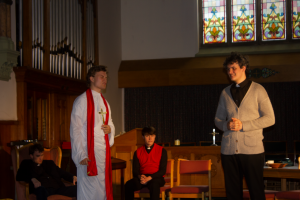 contributing to the overall atmosphere and merging the boundaries between set and audience. It cannot be denied that the Methodist Church is a difficult place to convincingly stage a fully realized production, with its asymmetrical staging and unadaptable openness. However, Winters and the crew of Father Ted were able to use these quirks of the venue to their advantage, cleverly and effectively sectioning the staging into zones of bedroom, sitting room, and an ambiguous space which could be adapted to any desired location. By navigating the unusual venue in this way, the production was able to achieve a clear ‘scene-by-scene’ structure to their performance, creating the sensation of the sitcom happening live before you as opposed to watching a stage adaptation.

The main trio of Father Ted (Matt Redmond), Father Dougal (Cameron Gergett), and Father Jack (Richard Sharpe) maintain a successful comic tension between the three of them at all times, which played to the distinctive one-liners and almost slapstick humour of the original series. This comic trio also provided an impressive flow of energy throughout the performance that caught-up the audience and carried the show forwards. However, this energy would sometimes fall flat, though this diminished momentum was only made notable by contrast to the many highs achieved elsewhere in the performance. Possibly the truest embodiment of one of the original Father Tedcharacters was achieved by Amy Howlett, in her role as Mrs Doyle, brilliantly capturing the mannerisms which make her character so iconic and bringing them to life on stage.

One of the biggest challenges facing the adaptation of Father Ted must be the wide and varied range of characters that the sitcom demands. However, this problem was deftly navigated by Winters with effective casting that served to demonstrate the 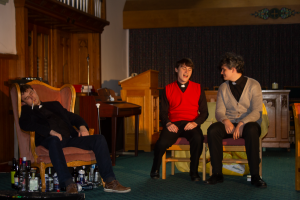 wonderful versatility of all the multi-roling actors in the cast. Special mention must go here to Charlie Pipe, playing everything from an alcoholic British gameshow presenter to a monkey priest and was able to create a unique, distinctive character for each of his appearances. Despite several difficulties arising with tech during the performance and a certain lack of clarity between episodes in each act, the dedication of cast and tech team alike meant that some of these issues added to the comedic charm of the performance, and if not were quickly forgotten in the many fast-paced gags of the show.

As Winters points out in her director’s note, attempting to adapt Father Ted to stage is a brave move and brings with it a lot of responsibility. However, with this production Ooook! have definitely achieved a worthy rendition of the classic sitcom, whilst maintaining all the original’s charm. Though the energy may have dropped at points or certain sections started to drag, the relentless cast were always quick to rebuild the momentum and ensure that the audience were re-immersed in the comedic world of Father Ted. In short, the show was a marked success that often reduced the audience to stiches.

Father Ted will be playing in the Old Elvet Methodist Church at 7:30pm on Friday 21st and Saturday 20th June.