Performed at Edinburgh’s Festival in 2014 and at London’s Orange Tree Theatre last year, Duncan Macmillan’s Every Brilliant Thinghas been described as able to strike ‘a delicate balance between sobering loss and cathartic laughter’.  This statement could not be more accurate, since despite all of its comedic undertones, it never quite allows the audience to be swayed into a false sense of security.  The play, comprising of a single actor, Layla Chowdhury, explores the narrator’s mother’s periods of depression, told in a paradoxically light-hearted manner, through a list which the narrator has built upon throughout her whole life, of every brilliant thing.  From ice cream to the colour yellow to rollercoasters, this eclectic list tells a heart-warming, yet unapologetically truthful story of a child’s attempt to cure their mother of mental illness.

For me, the use of venue was particularly noteworthy.  The play took place in Durham’s Cafédral, a charming café which I felt 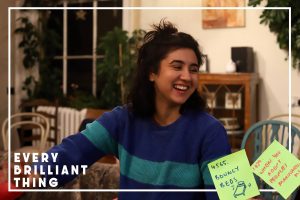 was utilised cleverly by director Rosie Dart and assistant director Maddie Lock, to create a more intimate setting.  Upon entering, the space felt cosy, welcoming and friendly, as if it were someone’s living room. The kitsch décor of the café and the mismatched, jumbled furniture reflected perfectly the every-day nature of this play and worked particularly well for the concept of using the audience as members of the narrator’s support group.  The directors chose only to use lights already provided in the café: a shabby-chic chandelier and a tall lamp with an old-fashioned lamp shade.  This seemed a sensible decision as I feel as though any theatrical lighting would have taken away from the meta-theatrical side of the play, which is ultimately what gives it such charm.

Being a one-woman play, Chowdhury must be commended for sustaining such an engaging and all-encompassing performance, as not only did she narrate using continuous audience interaction, but she also adopts multiple personas.  At times, I felt as though there was a bit too much disparity between the learnt lines and the improvised ones, meaning that the improvised lines tended to feel a bit like asides, but I felt as though this improved as the play progressed and will undoubtedly improve in the coming nights. Chowdhury used the thrust-style stage to its full potential, sitting with the audience at times, frequently making eye contact with them and walking in between the chairs, forcing us to follow her intently and never allowing complacency. There was the occasional line slip up, but I did not feel as if this hampered the overall expression of the lines too much, seeing as the script left so much room for improvisation. It allowed for the addition of some improvised 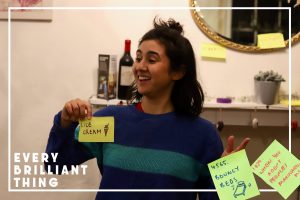 nuances, intertwining the actor’s own life with the life of her character as she saw fit. The words seemed more personal and tangible, and ultimately really allowed the comical side of this play to flourish, since the audience could empathise not only with Chowdhury, but also with one another.

The concept of the list allowed the actor to explore the topic of mental health from the naïve and innocent perspective of a seven-year old, who as a grown woman now has the benefit of hindsight. Chowdhury’s tone was generally upbeat and conversational, punctuated by moments of sobering poignancy as the lines offer startling honesty on the narrator’s experience of her mother’s decline. I felt that Chowdhury made excellent use of pauses to allow the audience to take in what she was saying, as the brutality of it tended to take one aback.

The cast and crew created a particularly interesting publicity campaign which complemented the play perfectly, involving writing ‘brilliant things’ on post-it notes and sprinkling them around Durham.  This not only gave the play a preface but also a legacy and above all it carefully captures what it is that Duncan Macmillan hopes to achieve; that is to encourage us to find joy in the quotidian aspects of life.  The reality is that we are not infallible and although mental illness can make us feel weaker, it is these small aspects of brilliance that give us hope and this is what this play celebrates.  There is never the sense that this list, which ties the various strings of the narrator’s life together, is exhaustive.

A wonderfully sensitive and thoughtful performance; watching this play will undoubtedly be added to your list of ’brilliant things’; I know it has been to mine.

Every Brilliant Thing will be playing at Cafedral on Friday 7th and Saturday 8th December at 7:30pm.