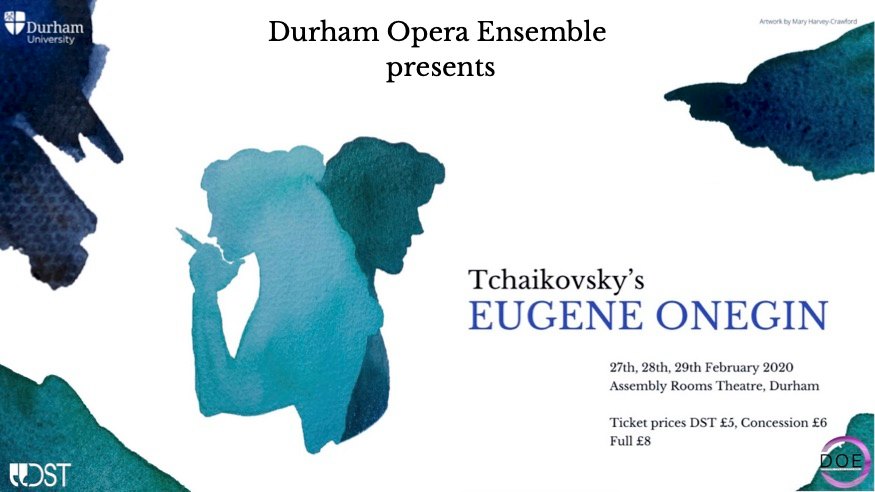 ‘The spleen is what the English call it, ee call it simply Russian soul’

A story about love, conceit and regret, Eugene Onegin follows the life of a vain hero who comes to regret his refusal of an innocent young woman’s love and the tragic outcome of duelling with his best friend – but it is all too late. Durham Opera Ensemble brought this masterpiece of two great artists – Tchaikovsky and Pushkin – to the Assembly Rooms Theatre. Musical Director Leo Thomson and Directors Caitlin Hayton and Emma Tsoi orchestrated a near-flawless show that encapsulated the grandeur of opera as well as the bathos and subtle cynicism of traditional performances of Eugene Onegin.

The singing was near-pitch-perfect. I was left both incredulous and slightly envious at how much vocal talent there was packed onto the stage. Poppy Metherell was a great Tatyana, bringing not only astonishing singing but convincing and passionate acting as well, exemplified in a truly mesmerising solo scene during the first act. Edward Wenborn, playing Onegin, had an impressive and dominant stage presence, and while he was not the strongest male vocalist there, he gave a convincing and competent performance. Alistair McCubbin as Lensky was a truly amazing tenor with a beautiful tone and an endless range. His character could have done with more expressive stage movements, especially during his final solo, which was auditorily stunning but visually lacking. Nonetheless, moments such as the love song between him and Olga (Olivia Jones) demonstrated great acting skills. The chorus was used sparingly but effectively, and it was all the more impactful when we got the whole cast singing at once.

The only real pitfall was with the instrumentalists in the first half. Because the orchestra was small and string-oriented, any mistakes with intonation were obvious – especially in the slower pieces – and distracted my attention from the stage. However, this seemed to improve in the second half, the increased narrative action calling for fuller and faster orchestration with fewer noticeable errors. What resulted was some truly captivating playing, which, combined with the intensity of the singing on stage, made for an immersive thrill. The arrangements also highlighted some standout solo moments from Charlotte Smith on horn, Jonathan Blake on oboe and Elizabeth McCauley on flute. Emily Pugh’s harp playing must also be commended for bringing that signature Tchaikovsky magic into the theatre. Perhaps the most impressive member of the orchestra was the Conductor, the unsung hero of the opera. He exhibited astounding control over the entire production, efficiently smoothing out any issues with timing that arose between the singers and the instrumentalists.

The choreography was good, in spite of some moments of hesitation on the part of the cast members. It was impressive that they learned how to dance the polonaise, the waltz and the mazurka in only seven weeks! Choreographer Ava Cohen managed to fill the ball scenes with the pomp and excitement of an 1879 Muscovite party. You could most definitely tell that the costume designers had been hard at work as well. The dresses, especially in the ball scenes, were nothing short of stunning. The choice of dressing the chorus uniformly was also wise as it avoided over-shadowing the main characters and made the chorus seem more cohesive. The addition of small prop details such as the cross around Tatyana’s neck, the prayer rope used by Larina and the traditional embroidered pillow made the scenes look even more like they’d been taken out of Tsarist Russia. The lighting provided a subtle but beautiful support for the rest of the mise en scène and was perfect for highlighting emotional or tense moments in the narrative.

I would wholeheartedly recommend this show to anyone, regardless of whether they are in the habit of going to opera performances. It is enjoyable and accessible while still remaining nothing short of impressive.

Eugene Onegin will continue in the Assembly Rooms Theatre on 28th and 29th February.