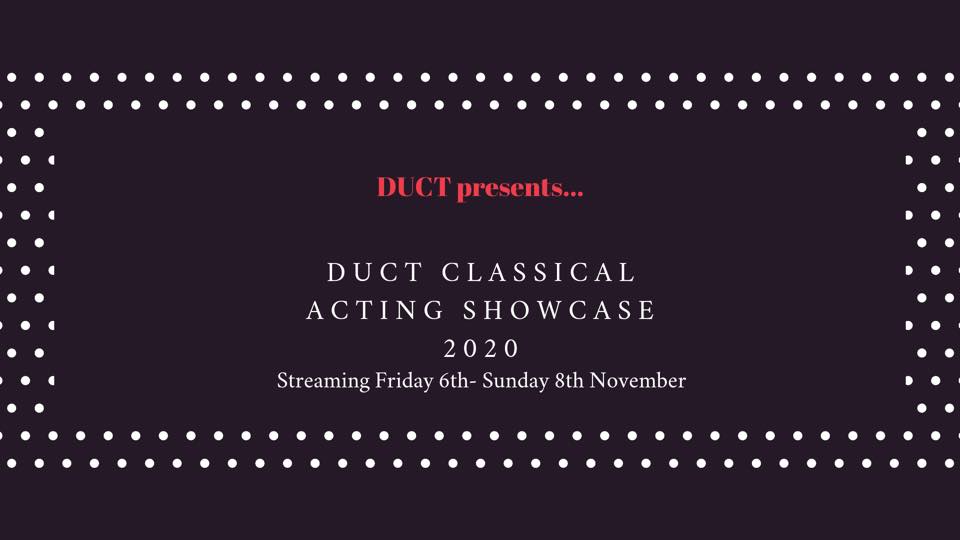 DUCT’s Classical Acting Showcase brings forward the work of five talented student actors performing classical monologues, with each actor portraying two contrasting characters. The winner of this year’s Classical Acting Showcase is Antonia Hogan. However, I would argue – cheesy as it sounds – the real winners are the audience who get to enjoy the array of emotions and drama explored by Hogan and the other four finalists from the texts of the great classical playwrights.

The showcase opens with the winner’s rendition of a monologue from Romeo and Juliet. Frankly, Antonia Hogan’s Juliet is terrific. Hogan’s command of her use of voice is powerful and convincing, as well as her marvellous use of her facial expression. It’s evident she has a real understanding of her character and managed to get under the skin of the text. Hers was a passionate performance spoken like a true Shakespearean actress. Secondly, Hogan’s Queen Katherine spits and curses her speech with succinct energy and, again, underpins her talented vocal expression. Although it felt the character could have been played less safe with movement and space, this is a performance that make your ears prick up and want to listen. It was clear the character’s lack of movement was an acting choice to create more effect when she finally kneels abruptly to the ground, but this beautiful moment mostly made me crave more of that lovely physicality elsewhere in Hogan’s acting.

Flo Lunnon is a joy to watch. Her Lancelot Gobo hauls the audience straight into the world of The Merchant of Venice and enjoins them to relish in her character just as much as she is. Lunnon is an engaging actor with sought after comedic and dramatic timing. She embodies the character physically and vocally in a superb manner, really allowing her acting to ebb and flow naturally and entertainingly. She also a rather versatile actress, although that can be said for many of the finalists. The anger, desperation and furore of her Antigone much embolden the Greek definition of catharsis. Lunnnon delivers her lines with a pit of rage and agony that carries throughout the piece, portraying a woman’s utmost grief. The line, “What moral law have I broken? What eternal truths have I denied?”, was delivered with fabulous weight and conviction.

Ben Willows as Mozart is a theatrical treat; embodying and savouring every second of the tortured artist, Willows never lets his guard down in this monologue. His comedic timing and mannerisms are excellent, and the shift in introspective text mirrored with his movement was a subtle, energising and appreciated touch. Although performed with conviction and patience, Willows Richard II isn’t as brilliant as his Mozart. Perhaps it’s the thin boundaries between sombre and flat that let him down with this performance, as it’s apparent Willows characterisation is infallible. It can be hard to strike such a balance and hold the audience’s attention whilst playing a wearisome character, so his performance is commendable.

Ruth Louis’ Queen Margaret strives to look the audience straight in the eye and interrogate them and does so deftly through her use of voice and physicality. The regal and resolute persona Louis plays is consistently strong, and her pacing is skilful. Moreover, Louis’ Andromache conveys lovely contrast and grits its teeth in the face of deep mothering grief. A great interpretation of the text and interesting performance overall.

Maire McGovern’s Hamlet is definitely to be. Her empty and broken portrayal of the despairing prince is still and sorrowful, using the space sparingly but all the more compelling. McGovern’s control of the audience thrives in this piece, and also carries into her performance as Miss Julia, where she exhales every word fluidly and forcefully. A greater range of facial expression, however, would have consolidated her craft.

The DUCT Classical Acting showcase delivers. These five capable student actors having fun whilst doing great justice to the epitome of classical theatre is genuinely worth checking out! All in all, a fantastic watch.

The showcase is available to watch until the 8th November. Check out the DUCT Facebook event and listing on the DST website for more details and booking.