Nosferatu, the Prince of Darkness, the Count; everyone knows the novel, everyone knows the fangs, and everyone knows the name ‘Dracula’. Solidified as an infamous figure throughout the history of human obsession with the macabre and monstrous since the publishing of Bram Stoker’s iconic tale in 1897, Dracula has punctured his way through the flesh of our dreams and into many nightmarish retellings. Some are truly blood-curdling in their manipulation of frights, whilst others are horrifying for entirely different, and arguably more disturbing, reasons (see: the ‘Twilight’ franchise). Amidst the entangled portrayals of the truly terrifying and the downright laughable, Dracula seemingly lost his bite along the way. Liz Lochhead’s adaptation of the original novel, adapted for the Durham stage by Castle Theatre Company, seeks to re-establish Dracula’s role as the ruler of the wretched and re-inject some malignancy into his cold veins.

Our narrative begins and ends much the same way as Stoker’s tale with a few minor changes; the young, naive Jonathan Harker (Keir Mulcahey) is sent to Dracula’s (Kyle Kirkpatrick) crumbling castle in the heart of modern day Romania to oversee some vampire real-estate, and the titular character embarks to Europe to prey upon the beautiful and virginal women of England, not least of all Harker’s wife Mina (Grace Brimacombe-Rand) and, in this adaptation, her sickly sister Lucy (Freya Hall). Amongst the central story, the suicidal and psychotic Renfield (Harry Twining) descends further into madness and the steadfast Dr. Seward (George Heuck) calls upon the infamous Van Helsing (John Duffet) to try and cure his fading fiancée. The key change to the narrative which the Castle players seek explore is the more ‘unsung’ voices of the original ‘Dracula’ work; greater light is cast on the central female characters, and their sexuality is freely explored outside of the shadows and away from the repressed prudishness of the Victorian era where Dracula’s origins lie.

It is, beyond a doubt, that Castle Theatre Company’s rendition of ‘Dracula’ is refreshingly original; it balances the grisly with the good-humoured, and the sober with the silly. No more perfect example of this can be found than by looking to Kyle Kirkpatrick’s performance as Dracula. On the one hand, his Dracula is presented as vicious, calculating and, above all, charismatic; during his first meeting with Harker, he is cool, collected and only an accent short of becoming the stereotypical English gentleman. Contrastingly, during Dracula’s moments of feeding-frenzy, he hisses and encompasses all of the stereotypical tropes of the Dark Prince; it isn’t deliberately humorous, but given the audience’s familiarity with the ‘watering down’ of Dracula’s terror, it would be difficult to not crack a smile at this presentation. However, it may just be a matter of how one prefers to take their Dracula tea; some may prefer the more cartoonish portrayals, and others may align with the 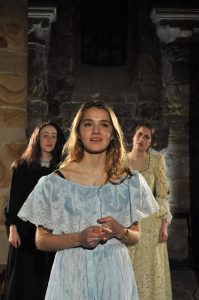 suave gentleman who lurks in the shadows and steals away your blood in the dead of night. Falling into the latter category, for me, Kirkpatrick’s Count had the most teeth when he commanded the room; gentle articulation, coupled with philosophical dialogue that wouldn’t be amiss in Shakespeare, is the Dracula that I found to be truly terrifying. Perfect eloquence, and the utterance of lines such as “I will drink in your words and digest them”, immediately contrasted with the vampirish brutality as the Count cruelly snaps someone’s delicate throat, is the haunting figure that we all check the shadows for before we go to sleep.

Not only Kirkpatrick’s portrayal of the iconic character deserves commendation; the cast in this play is especially strong, with no-one serving as a ‘weak-link’. Mulcahey’s turn as Harker is likeable, charming and multi-faceted; he can command the stage confidently, whilst also being reduced to a quivering wreck on the account of his unease. Hall’s exploration of the troubled Lucy is largely unsettling; her dazed looks and sweet voice pervade to a sweet, innocent girl masking something altogether more sinister and ghastly. In contrast to the original novel, the character of Renfield is brought to centre stage; throughout a number of asides, this troubled soul explores the mind of the psychotic and deranged who are made as the product of their treatment by others. Twining’s performance as Renfield was truly unsettling; a frantic ball of desperate energy, reaching out to those unwilling to help. It’s a truly miserable sight and sharpens the play’s darkened edge. A minor criticism perhaps lies in the way Castle Theatre Company has chosen to present its Van Helsing; brought to life by Duffet, this Helsing is maybe a little too unhinged. In a play where many of the characters are already swathed by madness or slowly descend into it, a more understated, mysterious Van Helsing may have proven beneficial. To abate this, Heuck offers a more discrete take on Dr. Seward and prefers to show the grief on his face, marked on his features, rather than shout about his lost love and agony.

‘Dracula’ is also a uniquely immersive experience owing to its fabulous staging and setting. In the depths of Castle’s medieval Norman Chapel, what better place could possibly serve as Dracula’s abode high in the Carpathian Mountains? Facilitated by this fantastically ornate setting is a gorgeously gothic atmosphere which creates an intimate performance space with vocals carrying on its eerie echoing walls, and not forgetting completely authentic cobwebs. Taking our seats in the central chamber of the chapel, the audience is framed by towering columns behind which the dastardly Dark Prince tends to lurk. Natural acoustics outfit the performers without a need for microphones, and the audience is swarmed by the cacophony of voices deliciously complimented by the haunting string quartet.  Sprinkled throughout the chapel are light columns capable of providing a grotesque glow with washes of white and red throughout the performance. The sentiment of what atmosphere is created is best summarised by one of the play’s lines; “it’s all a bit gothic for me but, oh, do we love it”.

Stipulating points of improvement for Castle Theatre Company’s adaptation of ‘Dracula’ lies majoritively in narrative clarity. In a play of long duration (standing at almost three hours), some plot-points seemed almost lost amidst some of the more meandering, convoluted monologues spread throughout its duration. Direction to remove some of these character asides and perhaps replace them with exploration of plot points such as how did Dracula arrive in England; what is Dracula and Renfield’s past; and what has led to Dracula and Van Helsing becoming sworn enemies, may have injected more coherency into the narrative. The latter question posed, arguably, could have presented an even more interesting story than the one we were given —particularly as Helsing’s arrival in the second half seems all too late to establish a convincing ‘cat-and-mouse’ story between the iconic hunter and his vampire prey. Further exploration could also have been given to Harker’s harrowing month spent in the company of the Count and his blood-curdling abode. Besides his visions of the three vampiric brides, further macabre torture could have been presented to further embellish and underpin his disturbed state upon his return to England. The resounding thought, however, is that for a play named ‘Dracula’, the titular character was scarcely onstage. For the most part, the performance was almost bereft of what should have been an ever-present state tension and terror sustained by the mere prospect of the bloodsucker. A continued threat would have heightened the atmospheric horror and cut Dracula’s 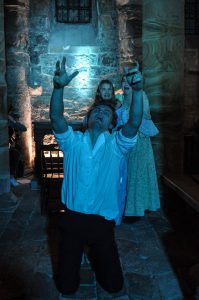 character as even more intimidating.

For the most part, Dracula’s direction was placed in good hands. Namely, Sophie Boddington and Oshy Ray’s attention to detail is what really embellishes the nature of their Dracula. There are countless examples but two resonant moments lie in the dirtying of Renfield’s white shirt as the performance progresses —a clear symbol of the sullying of purity and descent into insanity that each of the characters endures as the play draws towards its close— and the use of scraping nails down the Norman columns during the ‘Bedlam’ sections of the story.

Overall, Castle Theatre Company’s ‘Dracula’ is a hauntingly unique adaptation of a well-loved and widely known entity within the horror world. The play really finds its strength when it is less overtly malicious and more quietly intimidating. Having bite when it needs to, and driving a stake deep into your heart by packing a punch at the emotional story beats, this retelling demonstrates that there is life in the un-dead dog yet and injects new vigour —and blood— leaving you thirsty for more.

Dracula will be playing in the Norman Chapel in University College on Friday 16th and Saturday 17th November at 8:00pm.