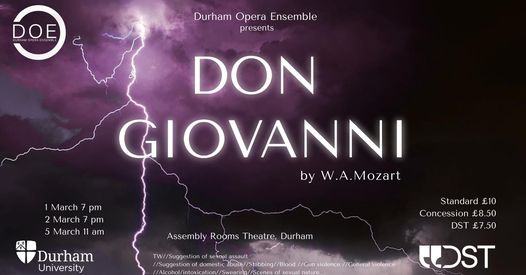 Durham Opera Ensemble’s Don Giovanni is an ambitious modern take on the story of the libertine whose romantic ventures lead to his downfall. The show is at times funny, melodramatic, tender, powerful, and frightening, and it approaches each of these shifts in tone with an unwavering excellence.

First time director, Ava Siena Cohen’s setting of choice – London 2017 – deftly highlights the themes of the play in such a way as to increase its accessibility to an audience. The use of stock footage of The Women’s March from January of that year sets the tone for the show; projected and played over the overture, we approach the opera with a sense of female solidarity and inevitability at a reckoning against sexual violence.

The staging is simplistic and mostly highly effective. The white backdrop and sparse stage allow for the 16-piece orchestra and incredible vocals to rightly be the stars of the show. The natural use of mobile phones throughout, and the projection of Don Giovanni’s Instagram profile, reminds us of the setting with ease. Working in harmony with the bold block colours of the lighting design and the elegance of the costumes, the direction comes together in a streamlined and stylish vision that leans into the melodrama. The detail in the acting choices from the whole company came across as modern, refreshing and natural, which sometimes felt at odds with the few traditional instances of choreography. But the blocking on a whole served the material and let the actors’ voices fill the space and the auditorium.

The simplicity of the lighting design worked incredibly well in the first act. Tech Directors Anna Choi and Georgia Malkin ensured the whole evening ran smoothly, and the undoubtable hard work from the tech team translated into a performance where the tech was able to subtly elevate the story, although it might have been used to do some of the heavy lifting plot-wise after the interval. The suspension of disbelief was challenged during scenes of physical violence and mistaken identity; an increased use of shadows and the darkening of the stage might have mimicked the environment described in the lyrics effectively. Again however, the acting was generous and to the perfect service of the music in a way which rendered these points trivial.

The lead actors were all brilliantly cast and displayed an amazing standard of talent. It truly was a privilege to be able to see them all perform. Reuben Esterhuizen as Leporello was invariably hilarious as Don Giovanni’s manservant, filling every moment with physical comedy and a charisma as he led the audience into the story, and Lilly McNeill as Donna Elvira was a steely, brave counterpoint to his cowardice and misplaced loyalty. McNeill’s voice also had a beautiful quality and clarity; each individual word and sentiment was felt and conveyed by her. She was able to avoid falling into some of the stereotypes of the woman scorned as far as the material allowed. Mathilde Brun as Donna Anna possessed an amazing control and hit some wonderfully window-shattering notes. As a character with a one-track mind of vengeance, Brun ensured her moments on stage were always exciting and built each time in intensity.

Ben Osland as the eponymous Don Giovanni had an incredible stage presence and succeeded in creating a character that we love to hate. He revelled in the depravity of the serial seducer and carried himself with all the surety of a nobleman thinking they are untouchable. His voice soared and squeezed out every syllable; he embodied the character who takes for granted their time and the space they inhabit, luxuriating in the music.

The whole orchestra, led by Musical Director Monty Milner and Assistant Musical Director Caleb Mock, must be congratulated for the feat they pulled off. The music was simply gorgeous to listen to and impeccably played. The large and looming shadow (presumably a fortunate coincidence) cast onto the starry ceiling of the Assembly Rooms of Milner’s conducting was an apt dramatic constant and accompaniment to the melodrama of Mozart’s score.

This is a show for lovers of opera and those completely new to the form alike. The direction is all-around completely accessible and considered, and the musical performances not to be missed. It was a pleasure to attend this opening night.