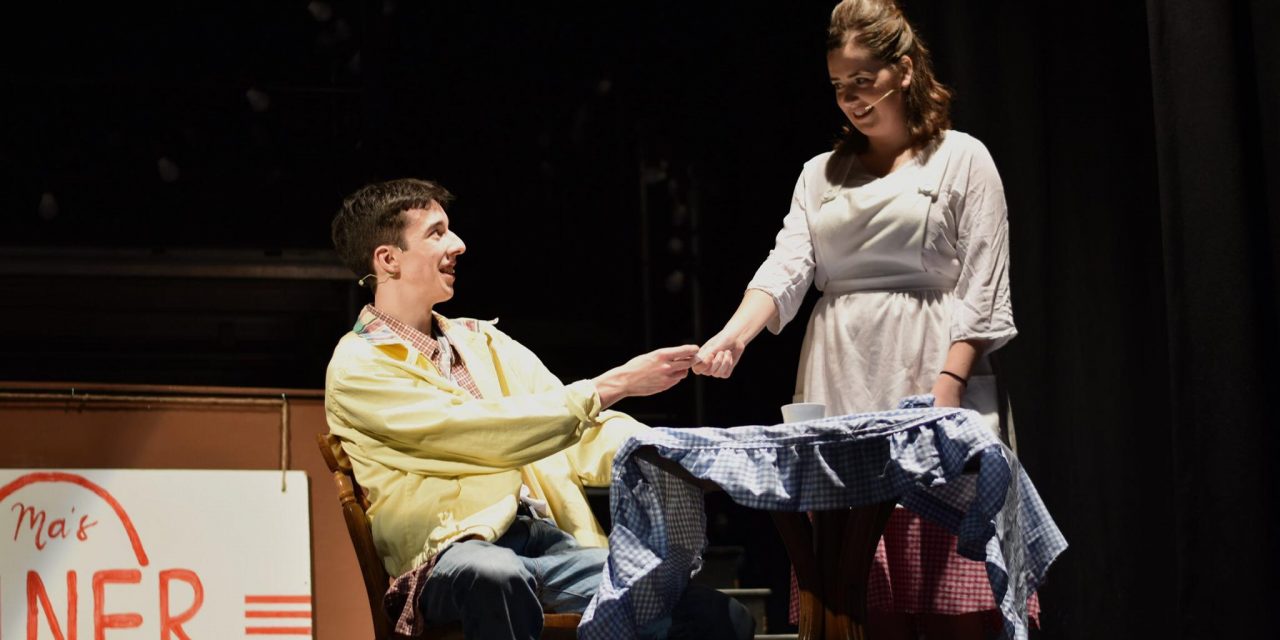 Dogfight is one hell of a musical, as biting and sharp in its social commentary as it is witty and fun in its lyrical delivery. DULOG has delivered a triumph here, no mistake about it.

The musical takes place in 1960s America and follows a group of marines on their last night Stateside before shipping out for Vietnam. They engage in a debasing and misogynistic ritual known as the dogfight, where each marine attempts to bring the ugliest girl he can find to a dance. The one who brings the worst-looking girl wins the pool of cash. All-in-all a simple yet horrifying premise that co-directors Millie Blair and Lydia Stephenson have dealt with masterfully, stressing the misogyny of the marines while also showing their softer, more vulnerable sides.

Charlie Nicholson as Eddie must receive significant praise, his sensitive yet brash portrayal of a character not yet a man, but no longer a boy heading off for war is an astounding demonstration of acting talent. His musical numbers were delivered with extraordinary confidence, ‘Come Back’ being so well delivered I could literally feel every emotion of the character through Charlie’s voice.

The cast as a whole were fantastic, Matthew Carr and Adam Hargreaves as Boland and Bernstein were pitch perfect in their portrayals of overconfident Jarheads. However, it was the title song of the show ‘Dogfight’ that ultimately blew me away. Isla Brendon as Rose is consistently unwavering in her ability to convey naivety and powerful independence, and along with Izzy Mackie as Marcy with her truly extraordinary voice delivered the best song of the entire show. Thomas Mullan deserves a special mention for effectively playing the yes-man of Dogfight. His character switching back and forth, along with the multi-rolling of the entire supporting cast is to be highly commended.

The scene transitions and the general choreography of the show deserve an entire review just to themselves, but in short Blair and Anna Kendall have delivered masterclass in telling a story through physical movement. The dance sequences, especially those involving the marines were brilliantly crafted, so much so they did that rare thing of actually complimenting the music and the singing rather than detracting from it. Scene changes in themselves seemed expertly choreographed and unbelievably smooth. For this stage manager Daisy Robinson and her team must be congratulated.

Despite this brilliance larger scenes such as the dance hall sequence did suffer some issues from a lack of space. The Assembly Rooms stage is already very small and the main set and other pieces such as the bar counter took up significant stage space. This made these large scenes feel somewhat limited but regardless of this set designer Cassie Hotchkies and assistant Rebecca Kenn must be heaped with praise for their brilliant work in constructing the bridge which takes up half the stage and is used dynamically throughout.

One such dynamic use is the choice by tech director and lighting designer Rochun Karia to have bulb lights wrapped around the edges of the bridge, which are only used of the dance hall sequence, creating the perfect lighting for the desired atmosphere. Furthermore, the sound and lighting of the entire show was outstanding. My personal favourite piece of lighting design was the Vietnam sequence. The lighting and sound creating a jungle atmosphere, building the tension until the shooting began followed by chaotic flash of lights as the flighting escalated followed by a sudden jarring change back to San Francisco, simulating for the audience the sudden and panic inducing change of a soldier returning home from war.

A very special mention must go to the often-unsung heroes of any musical – the band, who in my opinion were the overall stand-out performers of the night. Musical Director Honor Halford-MacLeod and Assistant Sarah Pierce have undoubtedly had their work cut out for them here when one considers the complex composition and orchestration of the music. The band executed this all beautifully, delivering a superb performance with Charlie Fletcher on both Double Bass and Guitar deserving of a special mention.

At the, end I left feeling dirty from laughing at the crude humour, uplifted by the music of the band and deeply sad for the characters whose lives were shattered in more ways than one. Dogfight is definitely a DULOG musical you do not want to miss.

Dogfight will continue at the Assembly Rooms Theatre until Saturday 7th March.