Corinna Harrison is a fan of Fortnight Theatre’s latest offering 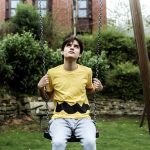 Leech Hall in St. John’s College is not a space that lends itself over easily to theatre of the intimate and modern nature of Bert V. Royal’s Dog Sees God: Confessions of a Teenage Blockhead. That being said, Fortnight Theatre’s production was incredibly slick and the minimalistic staging and lighting worked well. I was also particularly impressed by the polished scene changes, which really aided in keeping the momentum of the play consistent throughout.

I was not blown away by the script itself, which dealt with a teenage Charlie Brown, played with conviction by Kishore Thiagarajan-Walker, who has just lost his dog, Snoopy. The play dealt with a number of issues faced by today’s adolescents, which felt a bit gratuitous, and was largely based around a generic high school setting. Despite this, director Sam Harrison should be proud for having pulled off an enjoyable piece of theatre to a high standard, though I would question some of his decisions, such as the portrayal of Van’s Sister, played by Emily Chambers, who is in a psychiatric ward, to such an extreme that it seemed a bit crude. Chambers was brilliant, however, and incredibly expressive whilst keeping her face engaged throughout, though she should be careful of some accent slips on her more heightened lines. Harrison’s casting decisions were the highlight of the play, as each actor fully embodied their stereotypical high school characters and maintained the energy throughout.

Tricia and Marcia, played by Kate Anderson and Emily Hardy respectively, made a good pairing as the bitchy high school queen bees, though I would urge Hardy to take more care in finding the motivation behind her lines as sometimes her emotions seemed a little contrived. Dan Hutt as Van provided some excellent comic relief as the stereotypical stoner and was generally believable in this role, though at some points he was almost too relaxed and lost the intensity that may have been required. Danny Parker as Matt, however, was instantly believable in his bullying role, with a good portrayal of latent aggression and teenage angst, and his portrayal of emotional was often genuinely touching.

A shout out must go to Victor So for his incredible piano playing, and the incorporation of this music was a really nice touch.  As Beethoven, he created a good tension with Thiagarajan-Walker and you were genuinely rooting for him. He showed a good level of disbelieving anger, though he should be careful not to let his face drop when not speaking and to show the motivation behind every emotion change as some seemed a bit sudden. This goes for all the characters as it sometimes affected the pace of the production. The standout for me was Olivia Bevan as Charlie Brown’s sister, whose sass and detachment was instantly relatable, and in her more caring moments she was incredibly believable. Thiagarajan-Walker played the lost Charlie Brown very well, and though his moments of heightened emotion didn’t always feel believable, he should be incredibly proud of the performance he gave.

I was incredibly impressed at the consistency of the American accents and how much each actor stayed constantly in character, even when they were not the focus of the scene. The directorial decisions were generally good, though there were moments that felt extremely clichéd and non-naturalistic, and Harrison should be careful of falling into this trap. On this note, it would have been nice for the characters to actually be eating over their long lunches where they talked about the food but never touched it.  Overall, despite my gripes with the script itself, this production was very well staged and I commend each member of the cast and prod team. I only wish its run had been longer so more people could have seen it!