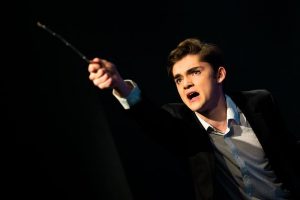 The Collingwood College Woodplayers’ production of Doctor Faustus, Christopher Marlowe’s seminal play portraying the moment the titular genius Doctor decides to sell his soul to Lucifer and its aftermath, debuted in the Collingwood Dining Hall on Thursday 30th November, and was a truly admirable directorial debut for director James Southall, who has put together a technically and creatively accomplished piece that was one step away from excellence.

Indeed, many of Southall’s changes to the original script were particularly impressive for a debut, opening up some interesting debates, and rounding out the modernisation of the play nicely. For example, his decision not to depict the ‘Good’ and ‘Bad’ angels that famously stand beside Faustus, tempting him respectively towards redemption and downfall, instead portraying them as voices inside Faustus’ head, voices that at seemed to cause him great discomfort and distress, opened up an interesting angle on mental illness. Similarly, his decision to have Mephistopheles – dressed as a priest –  appear through the infamous ring of an iPhone, as well as nearly all the Satanic figures – including Lucifer herself –  portrayed as women, were powerful ways of subverting the original text, and enabled further social critique without feeling one bit forced, or doing any detriment to the drama of the piece.

Furthermore, the use of the space, lighting, and sound, were all of a very high standard. The blacked-out set and minimal use of props allowed the simple but effective use of coloured lighting, as well as the modernised costumes, to come to the fore of the production. I must also confess a surprise, but a very pleasant one, at the presence of a very high-quality strobe light in Collingwood’s lighting apparatus, which added real excitement to Mephistopheles’ first appearance. The large stage space was used similarly effectively: the moment when Faustus is confronted by all the seven deadly sins, each personified, saw over ten people on the stage at once, all acting independently of each other, but, remarkably, this was when the stage felt most alive and most perfectly coordinated, and not at all overcrowded. The use of sound was of this typical high standard too – my only qualm with it was that it was not used anywhere near enough to its full potential. In my opinion, there were moments that could have benefited from an intelligent use of sound – the appearances of the ghostly Alexander the Great and Helen of Troy for example – but it stands as testament to a brilliant technical team that I was left wanting more.

The acting in this production left me with a much similar feeling of slightly unfilled potential. Don’t get me wrong, the standard was very high across the board. Henry Bird delivered a consistently accomplished performance as Faustus, keeping up great momentum across a vast number of lines. Yasmin Jones and Kyle Kirkpatrick (Lucifer and Mephistophilis) were the standouts for me, both exuding a controlled but intense darkness, Jones exhibiting real passion in her brief but powerful moments on stage, and Kirkpatrick providing the perfect Machiavelli counterpart to the smug and short-sighted Faustus. Kirkpatrick did especially well, I thought, in the final scene where he executes Faustus, which in this production was depicted as a quick but ruthless neck-break, and was delivered very convincingly. In the comic scenes, the two Martins (Docherty and Shore), did similarly well to radically modernise their parts, which would perhaps now feel the most dated of them all in the text, and commit to their creations fully.

My only critique of the acting in this production would be that not all cast members exhibited quite such a commitment or intensity. I think this may have been in part due to slightly excessive multi-roling among the more minor cast members, which when combined with the rapidity of some scenes left them little time to add convincing depth to each character, making the audience very aware of their repeated presence on stage as actors in different costumes rather than 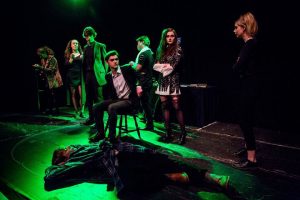 individualised characters. Similarly, if Bird had pushed his emotions a little further, or been pushed by his director to do so, this could have been a truly brilliant production. Though Bird was very good, he felt a little too consistent. At no point did I truly feel like he was a man on the edge, a megalomaniac, about to be dragged to hell for eternity, or sense much deep-felt change in him between these moments. However, having said that, he was nevertheless the keystone in a very engaging and enjoyable adaptation of a classic text, a text that Southall certainly did great justice to, and great things with, in this debut. I look forward to seeing his next production.

Doctor Faustus will be playing in Collingwood College on the 1st and 2nd December at 7:30pm.